Tripura CM Biplab Deb was not accused of domestic violence by his wife Niti Deb. The rumour started when CNBC-TV 18 tweeted an unverified claim.

Today, CNBC-TV18 reported that Niti Deb, the wife of Trupa CM Biplab Deb has alleged harassment charges against him.

The tweet was re-tweeted by Abhisar Sharma as well. 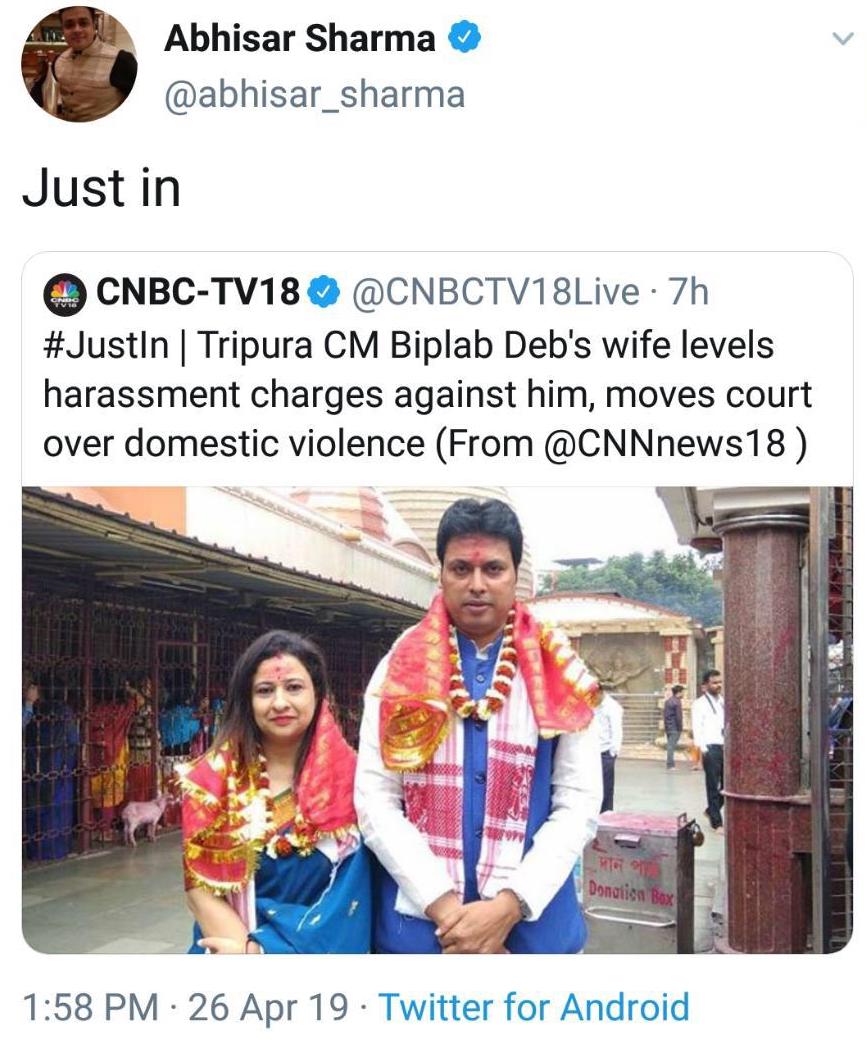 Moneycontrol tweeted "Tripura CM Biplab Deb has been accused of domestic violence by his wife, after which she has filed for divorce in the Tiz Hazari court of New Delhi".

NewsCentral 24X7 which was caught falsely accusing PM Modi of lying about washing his own clothes also jumped in to report it. The tweet reads "Tripura CM Biplab Deb’s Wife Accuses Him of Domestic Violence, Files for Divorce Niti Deb has reportedly filed for divorce at the Tis Hazari court, New Delhi."

Another online news portal thenortheasttoday.com reported that Tripura CM accused of domestic violence by the wife.

Niti Deb took to Facebook to deny the allegations of sexual violence against her husband. In the online post, Niti called the rumours “cheap and fake”. She further said the rumours had been generated for “cheap publicity and mileage.”

Rumors have no mouth ,,only dirty,filthy and sick minds generate for cheap publicity and mileage,,and importantly when paid high for spreading such dirty Rumors to gain political advantage against influencial people...otherwise who will follow these culprits... but sad part of it who people react and listen to these empty headed minds, with fake evidence, fake stories and pics used by such culprits, Being female I may say if all of you really loves me and have faith on me kindly teach lesson to these kind of people by boycotting and least bothered abt there existence even...I'm boudi, daughter in law, mother, sister and wife of someone belong to our State,,they not just try to tarnish my image but disrespected the love,affection and respect given to me by people of Tripura. My humble request not provoke nor react on evil heads cheap fake Rumors...Regards 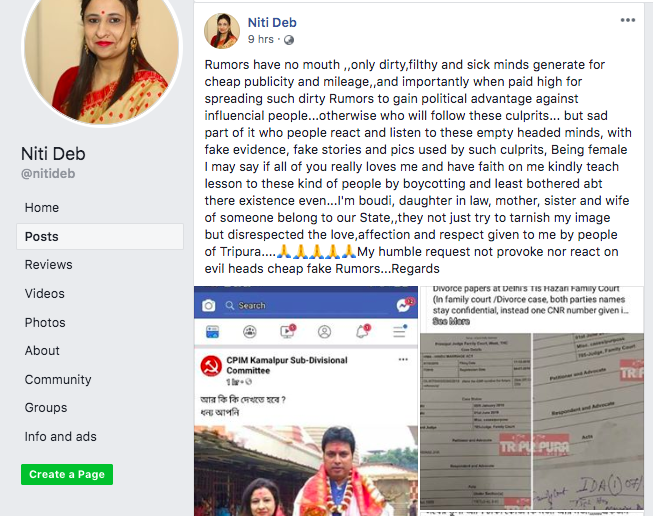 After the clarification, CNBC-TV18 deleted its tweet and issued an update. The new tweet reads "CLARIFICATION: In light of court documentation, we have deleted the original tweet. Tripura CM Biplab Deb's wife has filed a divorce petition under Section 10A of the Indian Divorce Act 1869. (Section 10A of IDA 1869 is dissolution of marriage by mutual consent.)".

Even though CNBC-TV18 has deleted its original tweet, all the media houses have updated their articles but yet to delete their tweets. The Quint has silently updated their story without issuing an apology.

Money Control didn't delete its tweet but clarified in the reply that they couldn't independently verify the claim of sexual violence accusation by Biplab Deb's wife.

NewsCentral24X7 hasn't deleted its tweet even though they have updated their article.

Conclusion: Tripura CM Biplab Deb was not accused of domestic violence by his wife Niti Deb. CNBC-TV 18 deleted its original tweet and have issued an update.