The claim that Muslims in Delhi raised provocative slogans amid Delhi Assembly elections is completely false. The shared video is misleading as it is an old video from 2017 from a rally in protest of a gruesome murder of a laborer in Rajasthan.

Recently, before Delhi Assembly elections, a video went viral on Twitter that Muslims in Delhi are raising provocative slogans amid the elections. Pakistani-Canadian author, Tarek Fateh shared the video with a caption, "In the #DelhiPolls2020, Muslim goons chant a provocative slogan against Hindus to boast Islamic supremacy. “Hindustan me rehna Hoga, Allah-O-Akbar kehna Hoga" (If u wish to live in India, then you'll hv to chant Allah-O-Akbar)" 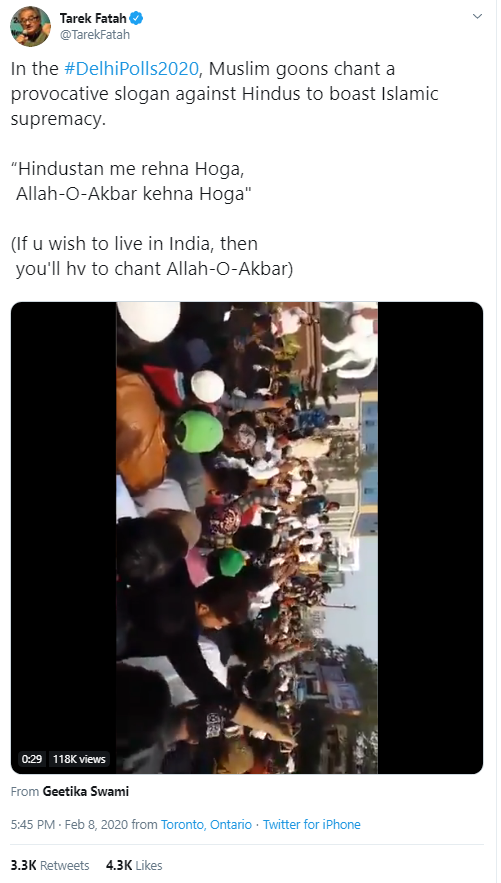 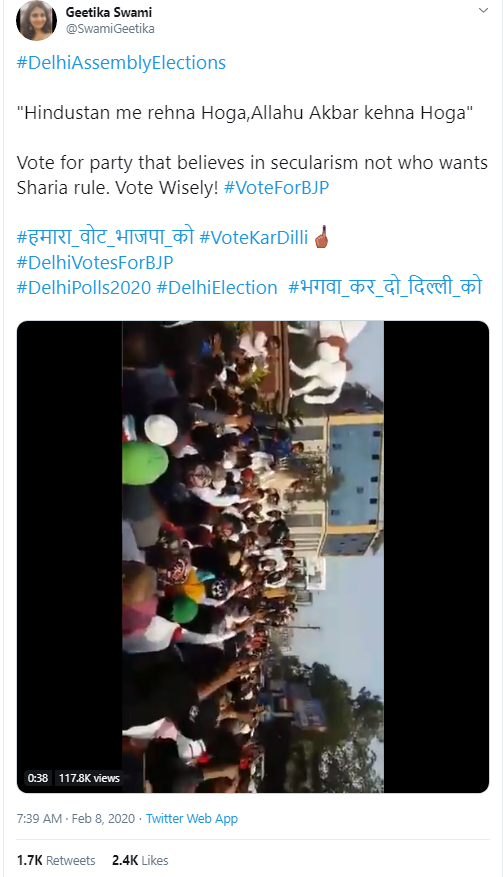 In the 45 seconds long video, a huge crowd of Muslims can be heard various raising slogans such as "Hindustan me rehna Hoga,Allahu Akbar kehna Hoga" (If u wish to live in India, then you'll have to chant Allah-O-Akbar).

In our investigation, we found that this is an old video from December 2017, and has resurfaced several times on social media with different claims.

The video is from a protest rally held on December 8, 2017, at the Chetak Circle area in Udaipur. Members from the Muslim community carried out the rally in protest of the murder of Muslim laborer, Mohammad Afrazul on December 6, 2017, Rajsamand, Rajasthan. Afrazul was hacked to death and burnt by a local named Shambhulal Regar, who had uploaded a video of himself committing the heinous crime.

A longer version of the video was upload on YouTube on 12 December 2017.

A report by Scroll.in revealed that the video of the rally held by Muslim groups was widely shared on social media between December 9 and December 12, 2017.

One of the excerpts from the article reads as, "The one-minute-thirty-seven-seconds-long video, which this reporter has seen, shows a group of around 100 men near Chetak Circle in Udaipur shouting slogans such as “Hindustan hamara hai [India is ours],” “Narendra Modi hai hai [Down with Narendra Modi],” “Shiv Sena hai hai [Down with Shiv Sena],” “Bajrang Dal hai hai [Down with Bajrang Dal],” “Hindustan mein rehna hoga, Allah-o-Akbar kehna hoga [To live in India, you will have to chant ‘Allah is great’],” “Hindustan ka ek hi raja, mera Khwaja, mera Khwaja [Hindustan’s only ruler is my Supreme Lord],” and “Bhagwa atankwaad band karo [Stop saffron terrorism].”

India Today also reported about the rally. The same video has resurfaced on social media on various occasions.

In conclusion, the claim that Muslims in Delhi raised provocative slogans amid Delhi Assembly elections in completely false. The shared video is misleading as it is an old video from 2017 from a rally in protest of a gruesome murder of a laborer in Rajasthan.