The spokesperson of the Home Minister stated that no documents would be asked by the enumerators for the NPR exercise. But if respondents want to provide documents for verification, they are free to do so, and clarified that there will be no compulsion from the side of enumerators to submit any document.

In the wake of preparations for conducting a Nation Population Register exercise and unrest against it, a news piece was published on Times of India with a title, "Have Aadhaar, passport? You’ll have to share details for NPR”. The article with a subtitle, Voter ID, DL info also mandatory”, claimed that people who don’t have the aforementioned documents don’t have to provide the details, but if people have been issued any of these documents, they will have to provide details of the same, although they are not required to show any document as proof.

The article quoted a senior government official and stated that although it is ‘voluntary’ to submit the identification to enumerators during the NPR data collection, it will be ‘mandatory’ to provide details of Aadhaar, Passport, Voter ID and driving licence if people have them.

Following the news story, a clarification was issued by the Ministry of Home Affairs on Twitter, where they have stated that none of these documents would be compulsorily required for NPR exercise.

In a series of tweets, the spokesperson of the Home Minister stated the report gives the wrong impression that the documents will have to be compulsorily given during the NPR enumeration, and such a connotation is not correct. it was further stated that no documents would be asked by the enumerators for the NPR exercise. But if respondents want to provide documents for verification, they are free to do so.

The tweet reads, "As quoted in a news item, "Have Aadhar, Passport? You will have to share details for NPR...Voter id, DL Info also Mandatory", gives a wrong impression that these documents would have to be compulsorily given for NPR exercise. Such a connotation is not correct.@TOIIndiaNews. 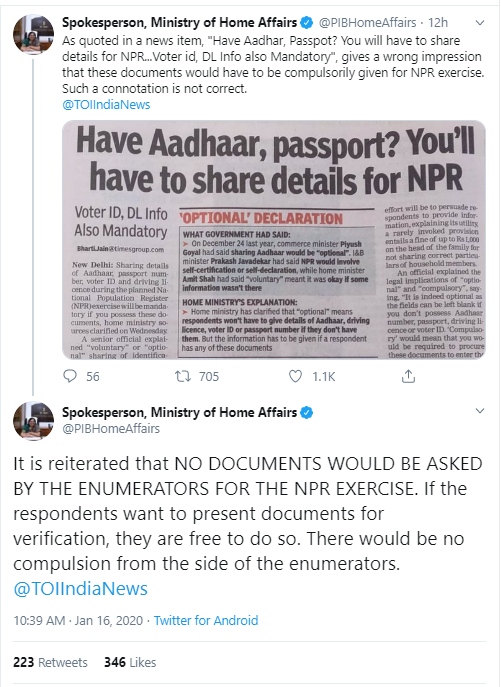 The NPR first came into being and was conducted in 2010 under the UPA government. The opposition parties have been protesting against the NPR in the country along with CAA and NRC. Amid all this, misinformation is being spread that people will have to produce documents, and if they fail to do so, they will lose their citizenship.

The government has clarified that there is no need for any proof, any papers, any biometric for the NPR.