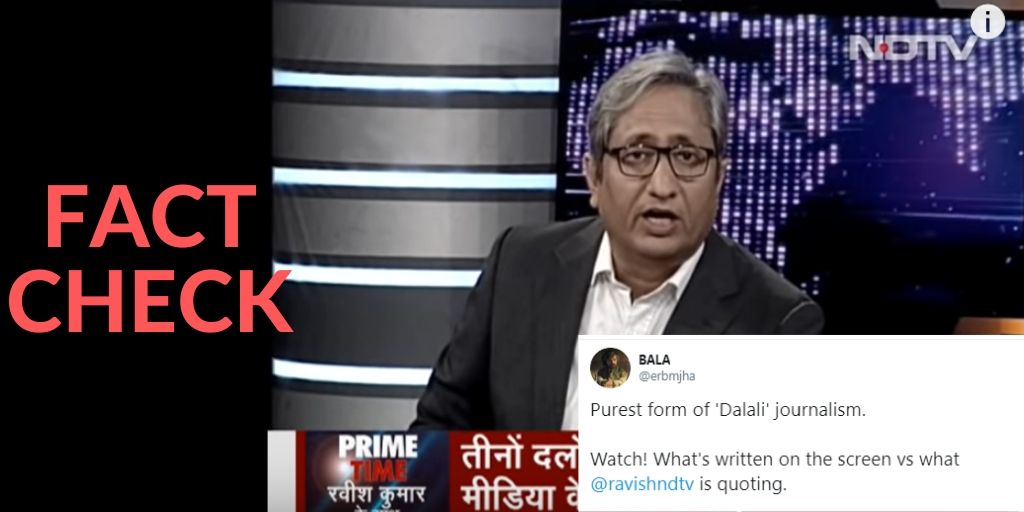 In our investigation, we found out that the widely shared clip on twitter is not edited and Ravish Kumar did make those statements on his prime-time show.

Amid political drama in Maharashtra, a video on Twitter was shared more than 2000 times with a claim that Ramon Magsaysay awardee Ravish Kumar in spreading lies in his prime-time show. A Twitter user named Bala tweeted the video with a caption, " Purest form of 'Dalali' journalism. Watch! What's written on the screen vs what @ravishndtv is quoting." 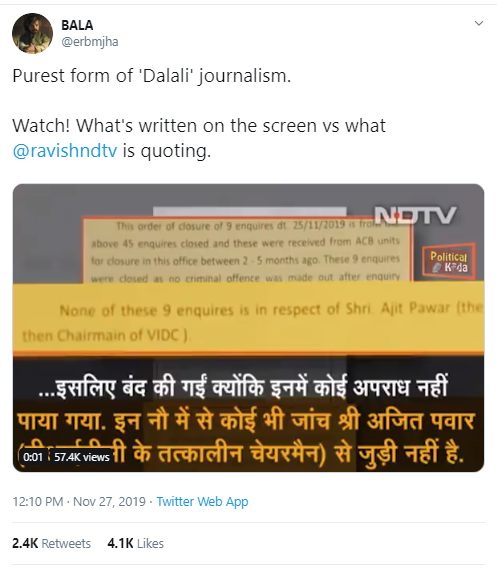 In the video, some highlighted text on the screen can be seen, that reads "The order of closure of nine enquiries off 25/11/2019 is from the above 45 enquiries closed and received from ACB units for closure in this office between 2-5 months ago. These 9 enquiries were closed as no criminal offence was made out after against anyone. None of these 9 enquires is in respect of Shri. Ajit Pawar( the then Chairman of VIDC)" meanwhile Ravish Kumar can be heard saying "It seems like that Anti Corruption Bureau has given clean chit to Ajit Pawar in these 9 cases."

The text on the screen and Ravish Kumar's statements are contradictory to each other. Earlier we had reported that Ajit Pawar did not receive any clean-chit in the irrigation scam cases, as the closed cases did not involve him.

We found the episode from which the clip has been taken. And it turned that the widely shared is not edited, and Ravish Kumar did make such a contradiction in his prime time show.

After 9 minutes 15 seconds, you can see the viral part. Later in the episode, he further goes on dismissing the clarification put out by ACB DG Parambir Singh, and suggests that it is just a gimmick. You can read our previous report for more information.

In conclusion, we verified the widely shared clip on twitter and Ravish Kumar did make those statements on his prime-time show.