FACT CHECK: Is BJP leader threatening a journalist not to ask questions? 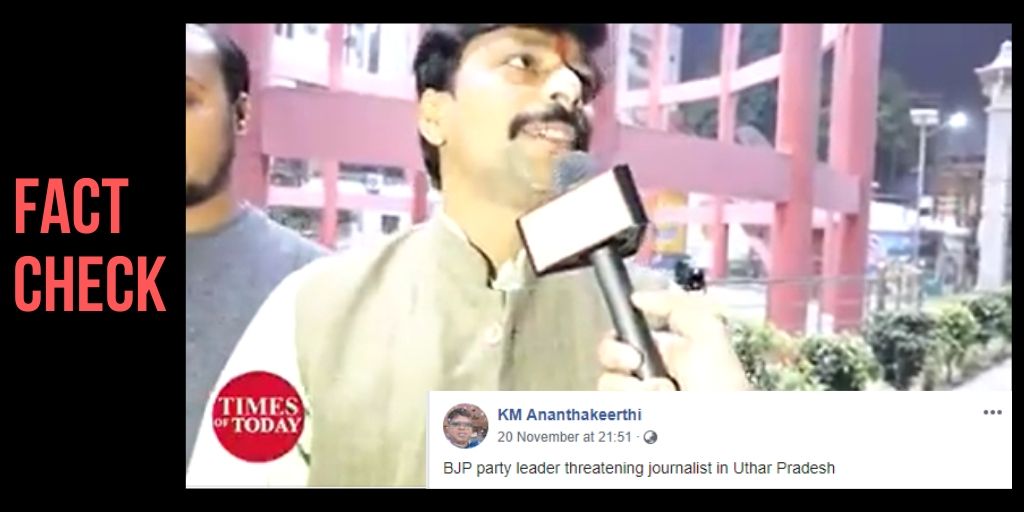 A video was widely shared on social media with a claim that a BJP leader is threatening a journalist of dire consequences if he will ask questions against BJP leadership. In our investigation, we found out that the man in the video, Harish Mishra, is not a BJP leader and whatever he says in the video is a sarcastic reply to a question asked by the reporter.

Recently, a video was widely shared on social media with a claim that a BJP leader is threatening a journalist of dire consequences if he will ask questions against BJP leadership. Raksha Ramaiah shared this video on twitter with a caption, "BRIEF TRANSCRIPT OF A VIDEO OF A BJP MP LEADER FROM UP: Are you not scared for your family? Stop questioning BJP or else you will end up like Gauri Lankesh, Learn & be more like Anjana Om Kashyap" 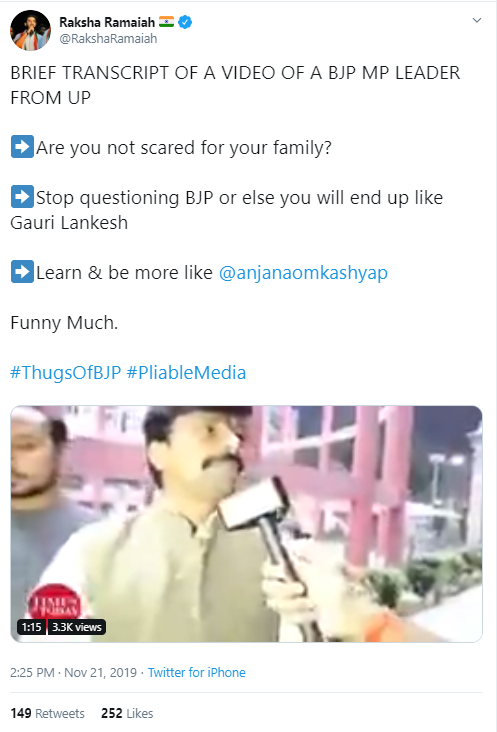 At the time of writing this article, this video has been reshared more than 140 times.

This video was circulated on Facebook as well with the same narrative. 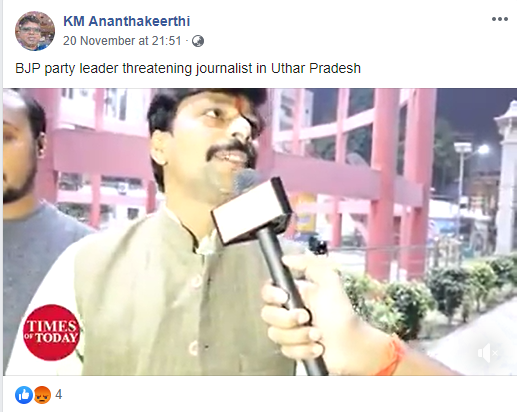 You can watch the viral video down below.

The video begins with a man speaking to a journalist in Hindi. He says, "From your question, I feel that you don’t fear for your family, do you? You don’t understand in whose rule and against whom are you asking this question. I will tell you, you may have forgotten. You are not living in the old India. You are living in a changing India. Here Narendra Modi is the Prime Minister. The state in which you are asking the question. The very state whose Chief Minister is called Yogi Adityanath. Please think about your family. Stop shooting questions against the government and Bharatiya Janata Party. Otherwise Pankaj [the reporter], you will be found lying near a corner of some bank like a brother of Gauri Lankesh. Else, there was one journalist in Mirzapur, who did an accurate report about students from poor economic background being fed with Salt and roti. He was sent to jail. Be a brother of Anjana Om Kashyap. I am giving you an advice, the people who ask questions against the government are being killed. I feel sorry for you. It’s okay, your emotions are good that you want to question in favor of the general public. My good wishes are with you. But in this country, the one who questions are getting murdered. They are being put to death. " (Translated from Hindi)

At 11:39 in the video, the reporter named Manish asks Harish Mishra, "Farmers are continuously committing suicide. What is the BJP government thinking about the farmers? (Translated from Hindi)

To this, Harish Mishra gives a sarcastic reply, which is now being clipped from the video and shared as an open threat from a BJP leader to a journalist.

When asked from which he will contest in the UP state assembly election,  Mishra answered that he will fight from any party which is against the BJP. Later in the video, he can be heard praising Congress' contribution to India.

With the above information, it is quite clear that the man in the video, Harish Mishra, is not a BJP leader and whatever he says in the video is a sarcastic reply to a question asked by the reporter.