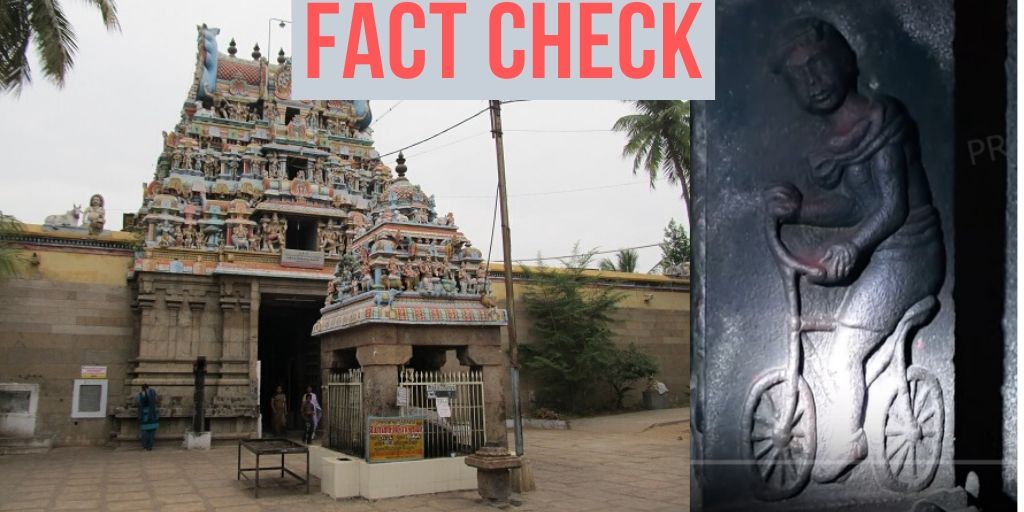 A video was shared on Twitter that claims that a 2000-year-old temple in India has a man riding bicycle carved inside it, suggesting that bicycle might have been invented in India, 2000 years ago. In our investigation, we found out the 'man riding bicycle carving' was engraved during the renovation about a hundred years ago, as there is no substantial evidence to prove that the cycle was discovered 2,000 years ago.

The Internet is a place where one can find all sorts of unusual things, which eventually reaches people through social media. Similarly, a video was shared on Twitter with a caption "Found a Bicycle carved in a 2000-year-old #temple. According to historians, bikes were invented 200 years ago. So how was it carved in #ancient times? Are we looking at evidence of advanced ancient technology? " 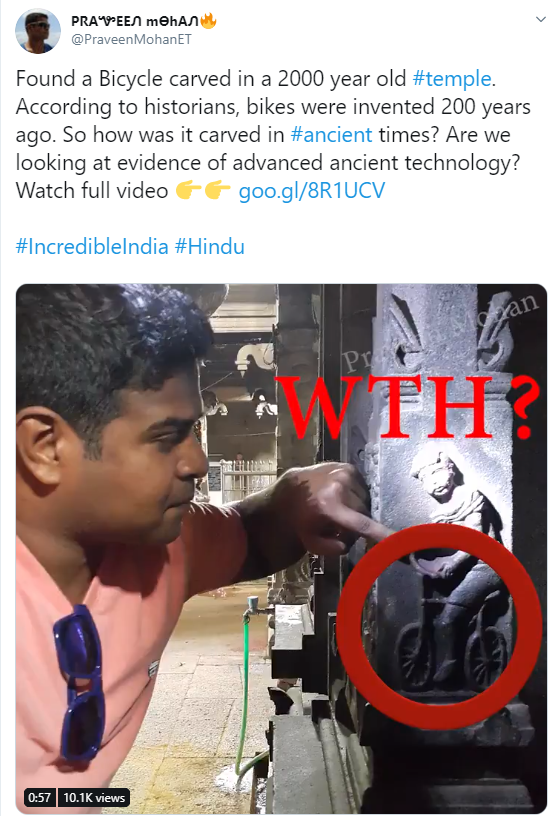 The video was shared by Mohan Praveen, the host of the “Phenomenal Travel Videos” YouTube show. The video talked about two centuries old temple that has a carving of a man riding a bicycle inside it. 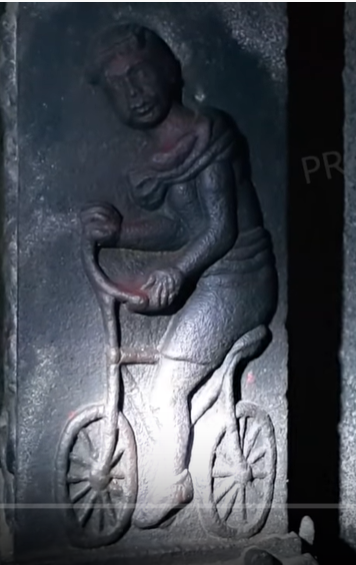 In the longer version of the video, Praveen argues that the bicycle might have been discovered in India rather than in Europe, as wheels were discovered in the copper age. He provides a long explanation of what the carving depicts and that the temple undeniably dates to at least the 7th century, long before the development of the modern bicycle. You can watch the complete video here.

In our investigation, we found out that people argue that this temple itself was built only a hundred years ago, which is false. This temple date backs to the 7th century as it has been mentioned in Tevaram, an ancient text.

However, according to some historians, some specific portions of this 2,000-year-old temple were renovated about a hundred years ago, and at that time a carving of then-popular bicycles were engraved by the sculptors. Dr. R. Kalaikovan provided a much more logical explanation to this in an article publisher The Hindu in 2015.

In the article, Dr. Kalaikovan explains:

“After the prayer, while taking a look around, I came across the carving of a bicycle on a pillar behind the Amman temple,” says Dr. Kalaikovan. “It was so funny and intriguing to see the picture of a cycle in an ancient temple. But neither the officials nor the scholar who wrote its history, were able to explain how it came there. I started researching this fact.”

Through multiple forays into the history of the bicycle (which was invented in Germany in 1800s), and the Chola-era Woraiyur temple, he theorised that the vehicle was possibly a novelty in Tiruchi of the 1920s, when the temple had been renovated. “Perhaps the sculptor had seen someone on a cycle, was impressed by it and had recorded it forever on stone,” says Dr. Kalaikovan.

Therefore, with the above information, we can say the 'man riding bicycle carving' was possibly engraved during the renovation about a hundred years ago, as there is no substantial evidence to prove that the cycle was discovered 2,000 years ago.