Fact Check: Pictures of an injured Maulana during a robbery attempt on him in Lucknow shared as an attack by RSS 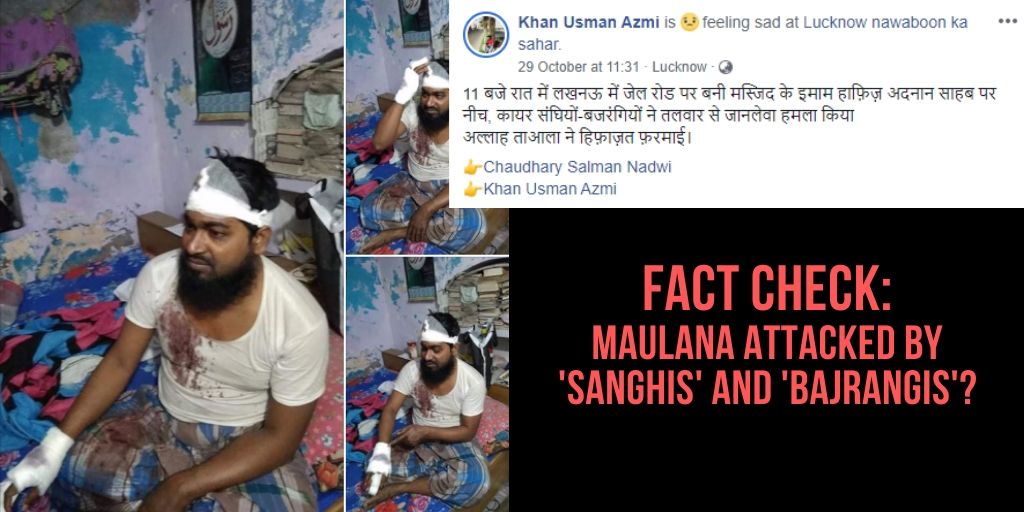 Pictures of an injured Muslim cleric are being shared a false claim that members of the Rashtriya Swayamsevak Sangh (RSS) and Bajrang Dal tried to murder him. In our investigation, we found out that the viral pictures of Muslim clerics are being shared with a false claim to mislead people. Some people are trying to portray a ‘failed robbery attempt’ as a communal incident

Images of a Muslim cleric is widely shared on social media in which he can be seen wearing a blood-smeared vest with bandages wrapped around his injured head and wrist. The pictures of the injured cleric are being shared with a false claim that members of the Rashtriya Swayamsevak Sangh (RSS) and Bajrang Dal tried to murder him.

A Facebook user named Chaudhary Salman Nadwi, who is national president of All India Muslim Movement, a Lucknow based organisation and state executive member of the AIMIM, shared the images along with a communal caption in Hindi that can be roughly translated to, “The lowly, coward Sanghis and Bajrangis attacked Imam Hafeez Adnan, the cleric of a mosque on Jail Road, Lucknow, with a sword at 11 pm. The great Allah ensured he was safe”. 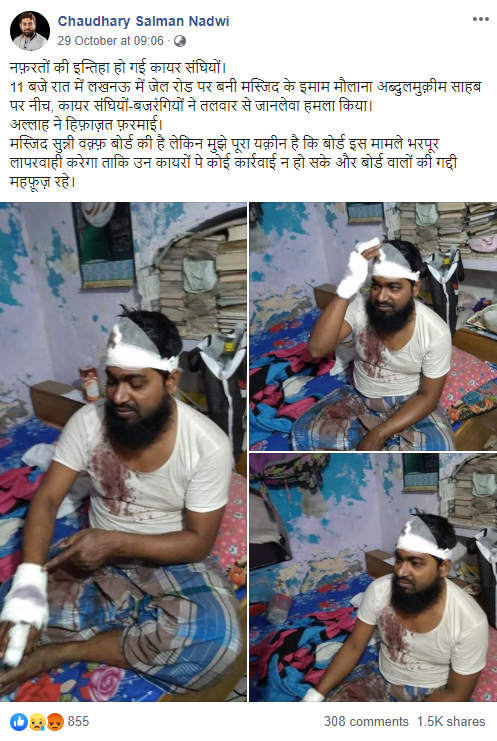 Another user named Khan Usman Aazmi also shared the same images along with the same caption. 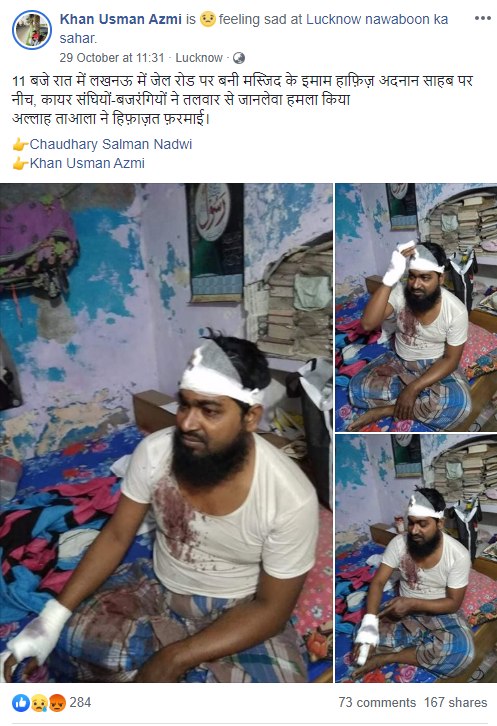 In the caption, ‘sanghis’ and ‘bajrangis’ are referred to as members of RSS and Bajrang Dal.

Truth Behind the images

In our investigation, we found a report by ‘Boom’, a fact-checking website where they have directly contacted the cleric Abdul Mukim in Lucknow. He confirmed that it was him in the viral photos and is currently recovering from the injury.

When Maulana Abdul Mukim was asked about the incident that is alleged to be communal, he said that it would be difficult to ascertain a communal angle as the attack was by only one person.

The Lucknow police also denied the communal angle and who said the arrested accused suffers from a mental illness and had entered the Maulana’s house with an intent to rob.

Lal Pratap Singh, Circle Officer, Alambagh Police Station said, “There is no communal angle to the incident. It was an act of robbery and Suraj, who is the accused in this case, is mentally ill. Also, he is not affiliated to any political party, neither is he a Sanghi or a Bajrangi.”

The Quint also covered the story and reported the same.

Therefore, we can conclude that the viral pictures of Muslim clerics are being shared with a false claim to mislead people. Some people are trying to portray a ‘failed robbery attempt’ as a communal incident.

Editor's Note: The title was updated after some users pointed out that it was misleading. The older title was giving a perception that it was Maulana who attempted the robbery. We regret the error.