Why lottery offers are applicable for all Indian citizens except the customers of Tamil Nadu? 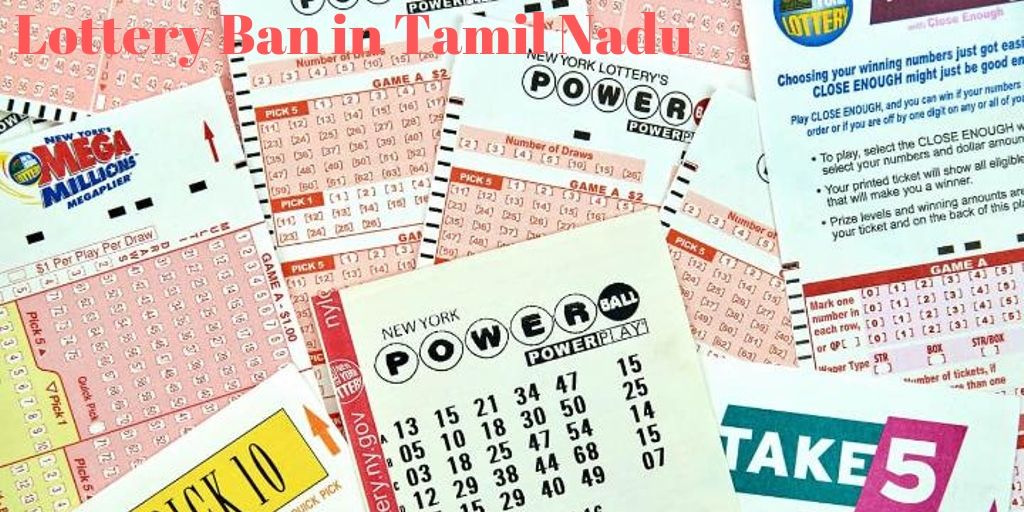 HDFC’s terms and conditions for a contest which are valid for Indian citizens but not applicable to customers in Tamil Nadu are not discriminatory. The Lottery itself was banned by the Tamil Nadu government in 2003.

A journalist Vijay Kumar who is associated with The Hindu tweeted a post along with the screenshot of a contest organised by HDFC Bank for its credit and debit card users in which the prizes included iPhones and a Mercedes car. The eligibility conditions to participate in the contest reads "the offers are valid for Indian citizens but not applicable to customers in Tamil Nadu".

He captioned his tweet, "Offer valid for all Indian citizens but not applicable to customers in Tamil Nadu. Why any citizenship issues"? 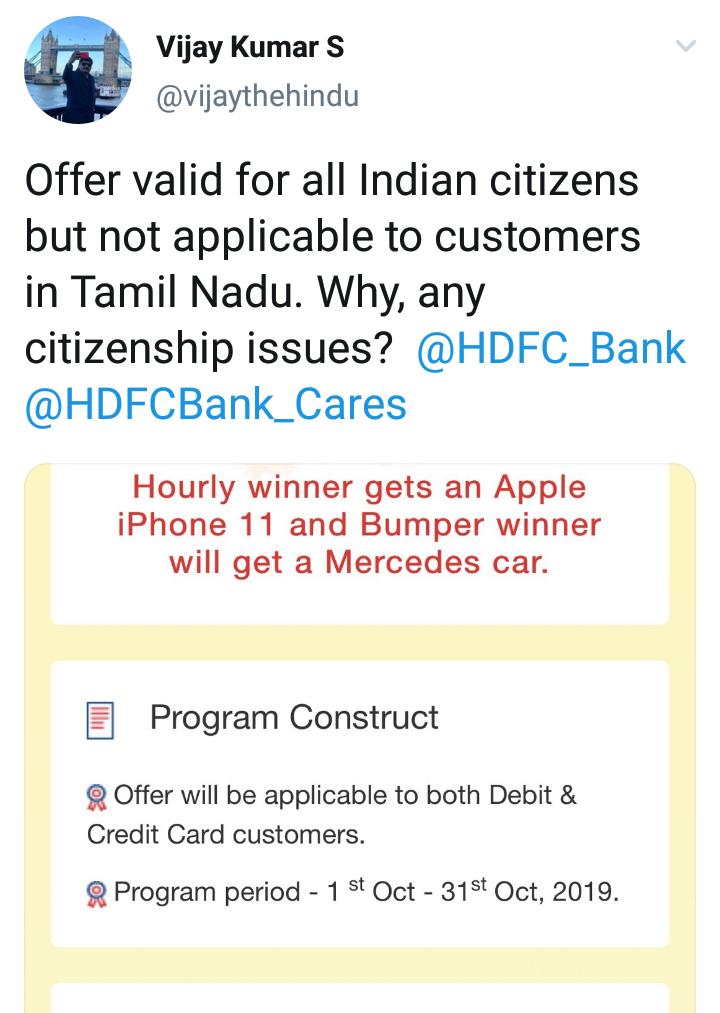 Here is the full image tweeted by him. 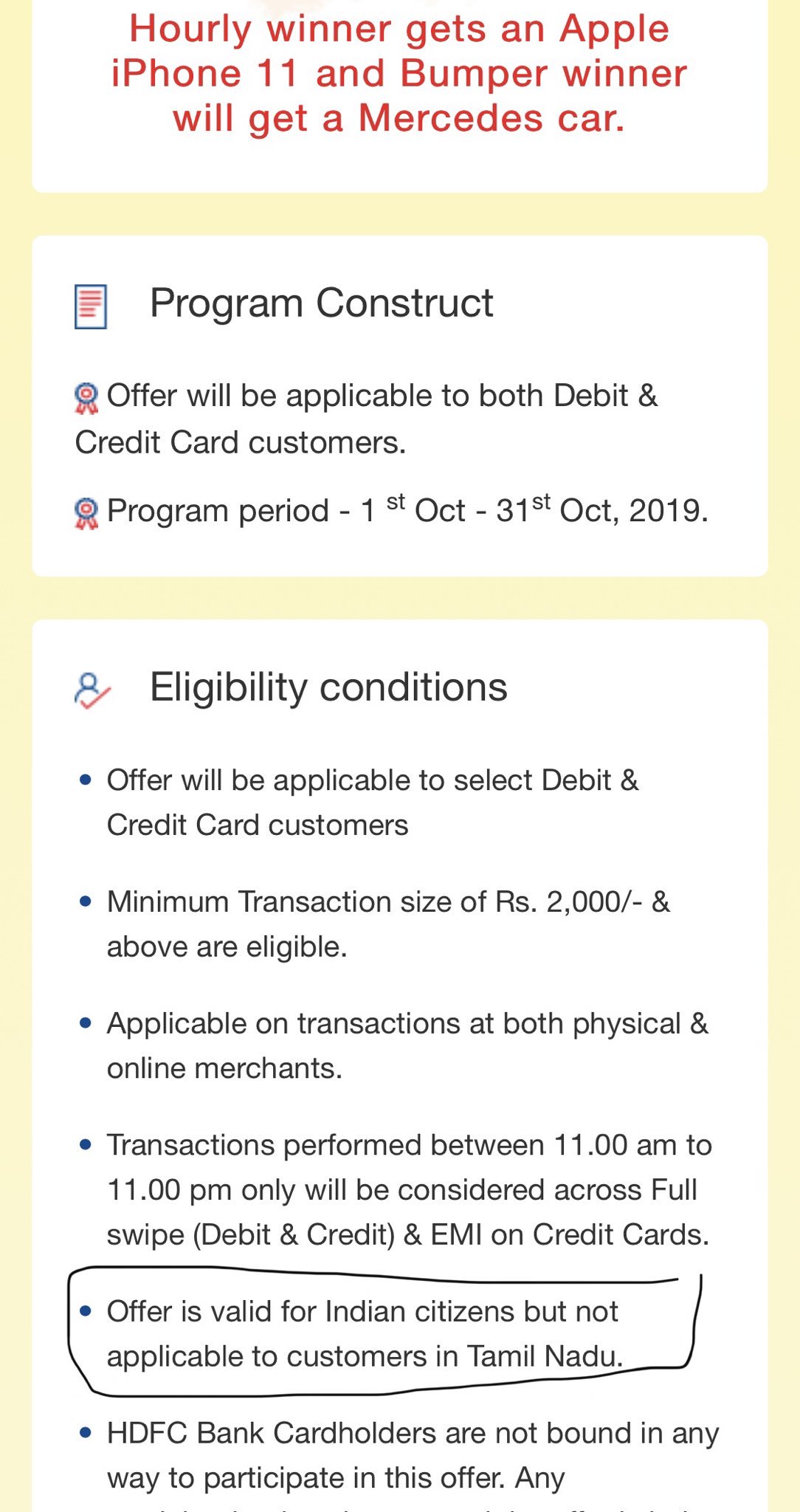 In the investigation, we found that the ban on lotteries began around the turn of the century when social activists raised concerns with people getting addicted to gambling leading to the ruining of families.

According to the Tamil Nadu Prize Schemes(Prohibition) Act, 1979 which bans games and contests that are modeled on a luck-based lottery. The act reads "Any scheme by whatever name called whereby any prize or gift (whether by way of money or by way of movable or immovable property) is offered, or is proposed to be given or delivered to one or more person to be determined by lot, draw or in any other manner from among persons who purchase or have purchased goods or other articles from shops, centers or any other place whatsoever specified by the sponsors of the scheme or on any event or contingency relative or applicable to the drawing of any ticket, lot, number or figure in relation to such purchasers".

Apart from lotteries, contests organised by e-commerce players like Amazon and Flipkart are also banned for the participants from Tamil Nadu. This ban has been in force for the past several decades.

Penalty for contravening the provisions of Section: Whoever contravenes the provisions of section 3 shall be punished with rigorous imprisonment for a term which may extend to three years. Provided that such rigorous imprisonment shall not be less than three months. Those who support such prize schemes in any other manner - procuring, aiding, abetting or acting as an accessory to the offense - will also be liable for the same punishment.

Conclusion, HDFC’s terms and conditions for a contest that is valid for Indian citizens but not applicable to customers in Tamil Nadu are not discriminatory. The Lottery itself was banned by the Tamil Nadu government in 2003.