RBI transfers Rs 1.76 lakh crore to the central government - Was RBI looted by the government? 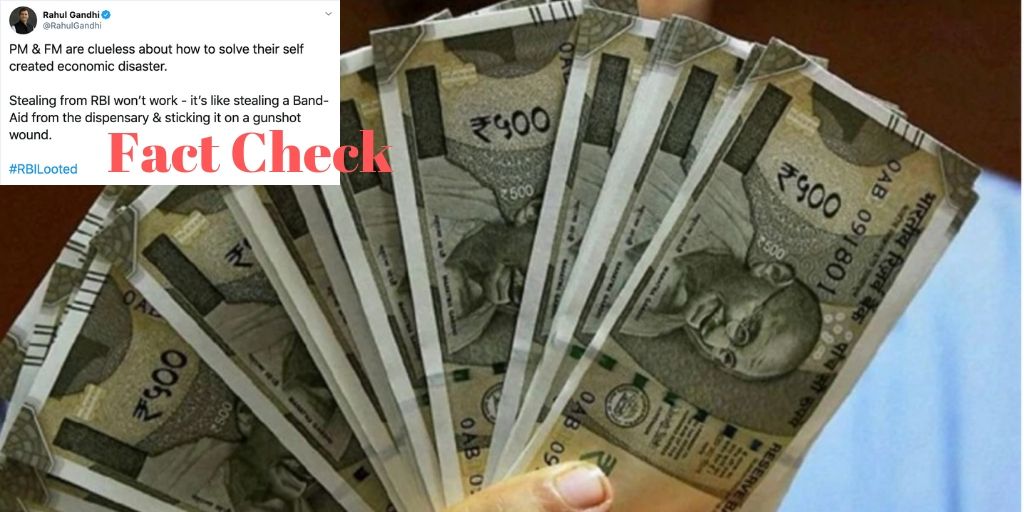 Reserve Bank of India on August 26 approved a transfer of 1.76 lakh crore to Government, this was the first time that the Central Bank has transferred such huge amount. This post looks at Jalan Committee recommendations and concern raised by the opposition over government acquiring the amount.

The Central Reserve Bank of India on Monday 26 August, approved the transfer of 1,76,051 crore to the government. This is reportedly the highest surplus amount RBI transferred in 84 years.

Rahul Gandhi in his tweet has accused the government of stealing central Bank's money.

"PM & FM are clueless about how to solve their self created economic disaster. Stealing from RBI won’t work - it’s like stealing a Band-Aid from the dispensary & sticking it on a gunshot wound. #RBILooted", reads his tweet. 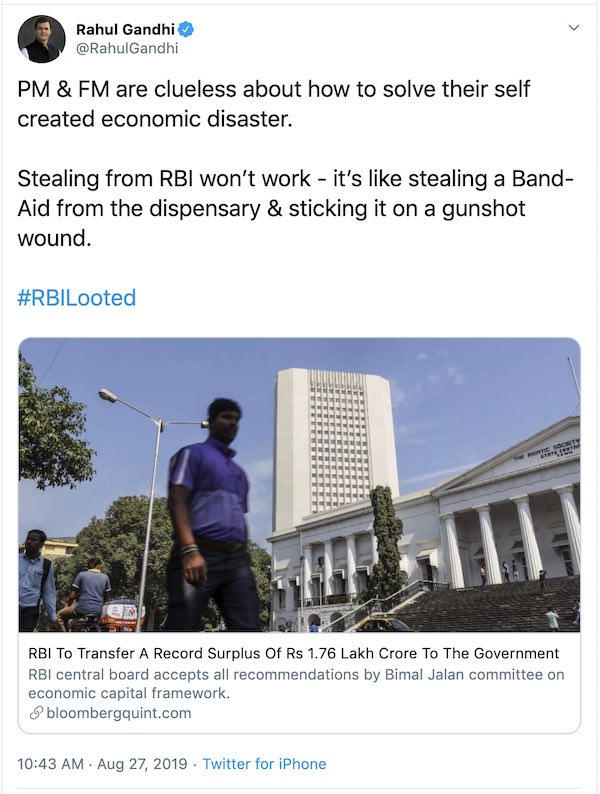 Is this the first time the Reserve Bank of India has transferred the amount?

After making provisions for bad and doubtful debts, depreciation in assets, contributions to staff and superannuation funds and for all other matters for which provision is to be made by or under this Act or which are usually provided for by bankers, the balance of the profits shall be paid to the Central Government.

How does the story unfold?

However in the year 2013, a technical committee headed by Y H Malegam reviewed the adequacy of reserves and surplus distribution policy, and it recommended a higher transfer to the government.

The Reserve Bank of India keeping its conservative approach initially was hesitant to meddle with its reserves and had resisted government’s efforts to far with them.

The resignation of then-governor Urjit Patel on December 11, had come amidst the backdrop of increasing tensions between the Reserve Bank and Ministry of Finance in 2018.

Following this, a six-member committee headed by former Governor of Reserve Bank of India Bimal Jalan was constituted by RBI in December 2018.

Were there any irregularities, what do the report suggest?

The Reserve Bank published the report of Jalan Committee on 27 of this month. An important and noticeable recommendation made by the Committee was ‘RBI’s contingency Risk Buffer to be maintained at the range of 5.5 % to 6.5% of the RBI Balance Sheet.

A business standard report brings out that government was eying for more than a 1.5 trillion from the RBI. The report says one of the members of the six-member committee was replaced by finance secretary Rajiv Kumar who became government nominee replacing his predecessor Subhash Chandra Garg who was moved to power ministry in July.

The scroll report suggests that government was keen on getting its hand on ‘Revaluation Account’, but the Jalan committee recommended: “Realised equity could be used for meeting all risks/ losses as they were primarily built up from retained earnings, while revaluation balances could be reckoned only as risk buffers against market risks as they represented unrealized valuation gains and hence were not distributable.” The Hindu Business line explains that ‘realized equity is essentially the existing amount in RBI’s contingency fund.

As brought out earlier, it is for the first time that contingency funds have been transferred by RBI to government.

What is the government’s view on reserve’s of the central bank?

The government was of the view that reserve’s of Reserve Bank of India is too large. A report published in the Indian Express and the telegraph says that government had been insisting that buffer stock held by Central Bank is higher than many other global central bank’s buffers.

What are the Contingency fund?

The Hindu Business Line in its explainer brings out that ‘reserves’ of Reserve Bank of India consists of Currency and Gold Revaluation Account, the investment revaluation account, the asset development fund, and the contingency fund.

The contingency fund constitutes over a fourth of the RBI’s reserves. The Hindu business line writes – The CF is a specific provision made for the meeting unexpected contingencies from exchange rate operations and monetary policy decisions. The RBI contributes a notable portion of its profit to the CF.

Addition to this fund through had ceased since 2013-14. The entire surplus in the RBI’s coffers was being transferred to the center. Starting again from 2016-17, the RBI again started transferring funds to the Contingency fund. But Jalan Panel recommendations have limited the contingency fund provision to 5.5 %.

Since the current contingency fund of RBI is more than 6.8%, the excess that is 6.8 minus 5.5 balance sheet, has been transferred to the government this year.

Now that the Central Bank has accepted the recommendations of Jalan Panel, what this means is that henceforth RBI would fill less money in its contingency fund and more of the central bank profit would be going to Reserves now and thus to government.

So, Rahul Gandhi's allegation that the government is stealing RBI's money seems to be baseless.