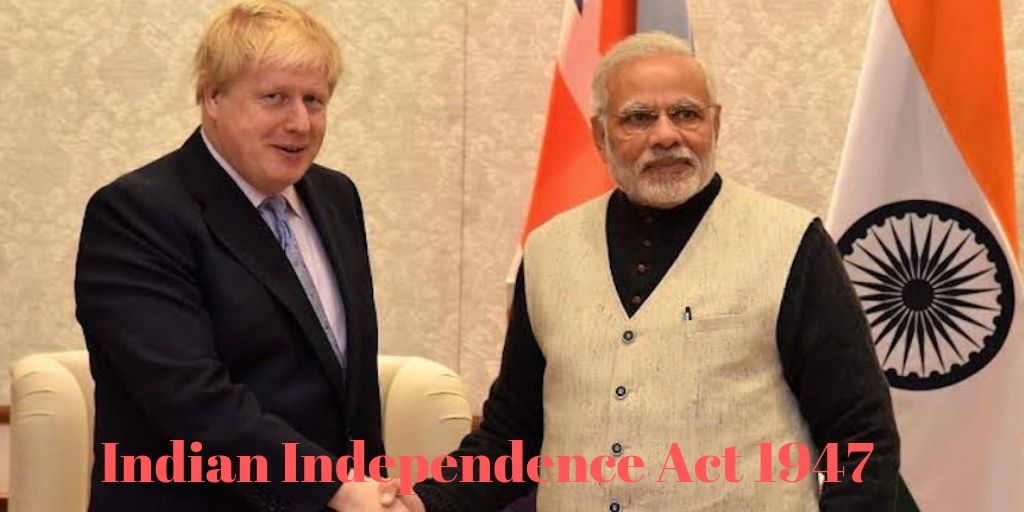 Britain Prime Minister Borris Johnson has not announced the revocation of the Indian Independence Act 1947. The article by Times of Britain was a satire. Moreover, the revoking of the Indian Independence Act 1947 has no effect upon us because the Act which gave power for two dominions is repealed by the constituent Assembly of India under Article 395.

A Twitter user RiA shared an article by Times of Britain to claim that British PM Borris Johnson has revoked the Indian Independence Act 1947 which means ‘Indians are now officially British citizens. 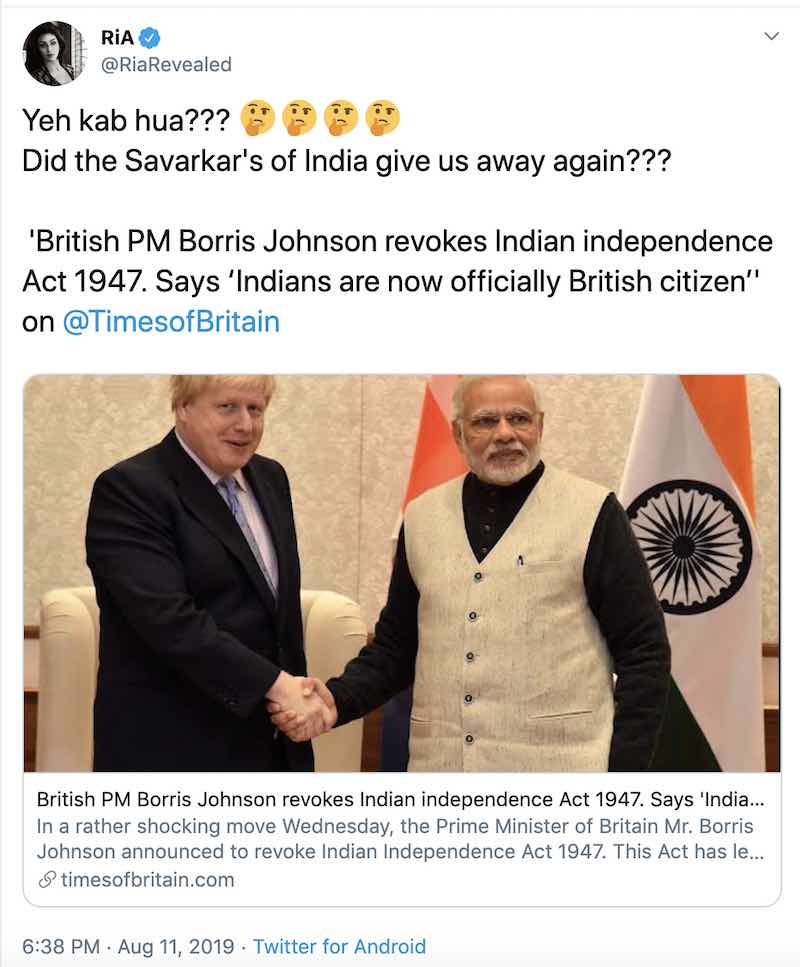 The little know website "The Times of Britain" reported on Aug 7 that  British Prime Minister Borris Johnson proclaimed the revocation of ‘Indian Independence Act 1947’. Britain’s Prime Minister’s move was ensued by India’s revocation of Article 370 on fifth which granted special status to Jammu and Kashmir. India’s Council of States (Rajya Sabha) diluted the special provisions under Article 370 on fifth this month.

Before this article, a moderator of a popular Facebook group "Indian Liberals" posted to claim that if British Parliament wants then they can repeal India Independence Act 1947 which is there is the British constitution. 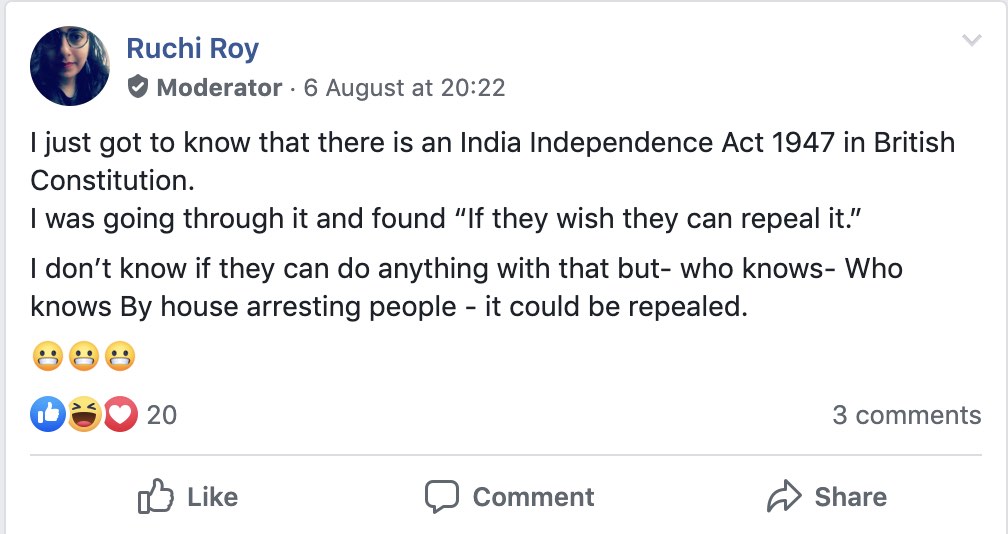 The claim that British PM Borris Johnson has revoked the Indian independence Act 1947 is not true. No mainstream media (international, British or Indian media) has published anything about it. 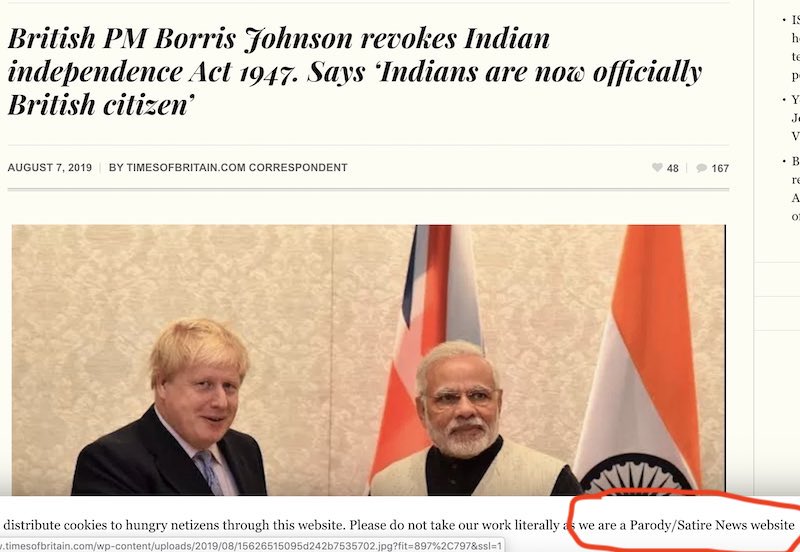 Even though it was a satire, many people fell for it and the article was widely shared on social media. You can see all such tweets here.

What is the Indian Independence Act 1947

According to www.parliament.uk, The Indian Independence Act of 1947 was an act to make provision for setting up in India two independent dominion, to substitute other provisions for certain provision for the Government of India Act 1947.

The Act was cleared by British Parliament on July fifth, and the Act received the Royal Accent on July 18 after the representatives of All India Congress, Muslim league and Sikh community had reached a consensus on Indian Independence Act 1947. The Act came into effect from 15th of August for India, with the division also came the dominion status to our nation. India became a member of British Commonwealth of nations in the same year (1947).

The Act contained provisions for the developments after partition. Some of the important provisions under the Indian Independence Act 1947 were;

India acquired dominion status after the partition. The title of dominion status to India meant “autonomous communities within the British Empire, equal in status and in no way subordinate one to another in any aspect of their domestic or external affairs, though united by a common allegiance to the crown and freely associated as a member of British Commonwealth of nations.”

India retained the title of ‘dominion’ only until the constitution came into being on 26 January 1950. However, India continues to be the member of the Commonwealth nations.

Commonwealth Nations, formerly (British Commonwealth) is now an intergovernmental organisation of 53 nation-states mostly ruled by the British Empire, including India. The Queen is the head of Commonwealths.

However, among the total of 53 members, only 16 consider Queen as their constitutional head. Such members known are known as Commonwealth realms.

But, can the British Parliament repeal the Indian Independence Act?

Indian Constitution with 395 articles and eight schedules is the largest written constitution in the world.

Article 395 of the Indian Constitution says:

Repeals The Indian Independence Act, 1947 , and the Government of India Act, 1935 , together with all enactment s amending or supplementing the latter Act, but not including the Abolition of Privy Council Jurisdiction Act, 1949 , are hereby repealed FIRST SCHEDULE Articles 1 and 4 I THE STATES Name Territories.

The Constitution of India came into force on 26th January 1950 and with that India became Sovereign, the Democratic Republic coming out from dark shades of British. (The word Socialist and Secular were added through 42nd amendment in 1976).

India is now the largest democracy having its own constitution. The constitution derives its energy from its people and is the sole guiding light for us.

Since the Indian Independence Act of 1947 is repealed in Article 395 of the Indian Constitution, and now that we are guided by our own constitution prepared by our founding fathers, we have long-ago come out of the clutches of British Colonialism.

The revoking of the Indian Independence Act 1947 has no effect upon us because the Act which gave power for two dominions is repealed by the constituent Assembly of India under Article 395.

The preamble of our constitution reads:

WE, THE PEOPLE OF INDIA, having solemnly resolved to constitute India into a SOVEREIGN SOCIALIST SECULAR DEMOCRATIC REPUBLIC and to secure to all its citizens:

EQUALITY of status and of opportunity;

and to promote among them all

FRATERNITY assuring the dignity of the individual and the unity and integrity of the Nation;

IN OUR CONSTITUENT ASSEMBLY this twenty-sixth day of November 1949, do HEREBY ADOPT, ENACT AND GIVE TO OURSELVES THIS CONSTITUTION.