Fact Check : Verifying claims about the PM scholarship scheme for the minority community

Debunking some of the misinformation about prime minister's scholarship scheme for the minority community.

A Twitter user recently posted a thread of tweets defending the government about PM scholarship scheme that aims to offer scholarship programs for 5 crore minority students.

This is the thread of tweets that he has shared to claim that most of us have been duped and taken for a ride by media on the news of PM scholarship and tricked into abusing our own government. 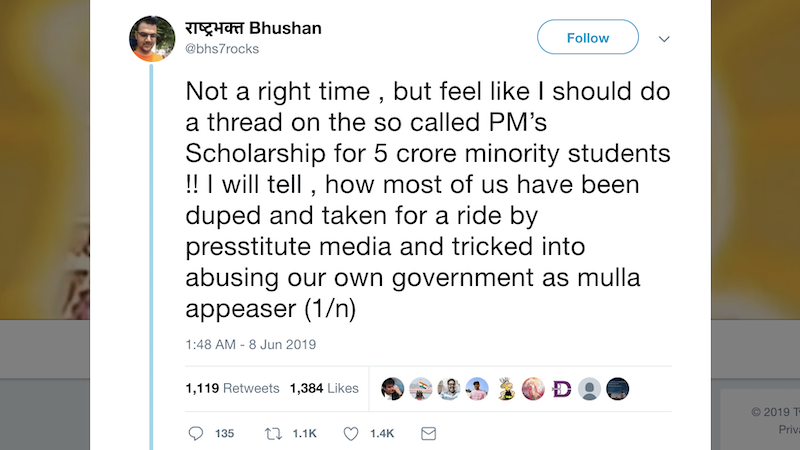 One of the first tweets in the thread has an attachment of a tweet from News18 that claims that the scholarship is aimed towards 5 crore minority students and 50% of the scholarships are dedicated to girls. This is captioned by the user claiming that it is ‘false propaganda’ and ‘far away from truth’.

However, this is not the case because the scholarships functions are as mentioned in the tweet. This can be confirmed by reading articles from Business Standard, Indian Express and News 18. These articles point out that the scholarship’s priority lies towards girls from minority communities. This can be confirmed true as the Union Minister Naqvi himself retweeted these articles. 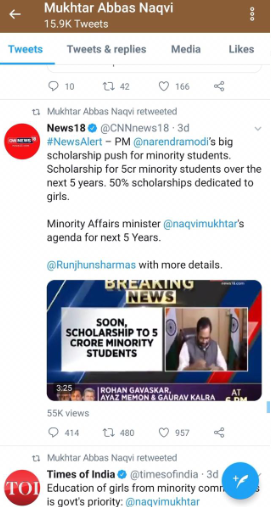 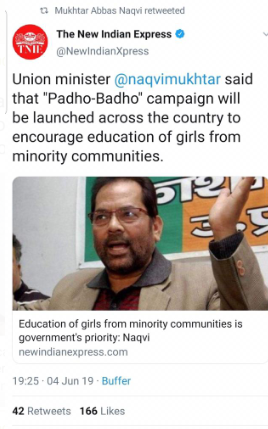 The Twitter user in the next few tweets has attached a press release that states that the scholarship is intended for 5 crore students and he has pointed out that the term ‘minority’ has not been mentioned. However, throughout the press release document, the term minority has been used except for the paragraph he has attached.

Moreover, Naqvi is the Minority Affairs minister and spoke about the main focus of the scholarship being especially focused towards minority groups and girls among other developmental plans. It can also be seen that in a video where he is addressing the press about the scheme, he uses the word "alpanshankhyak" which means minority.

The user then moved onto to say that the scholarship cannot be provided to 5 crore minority students as he believes there are not 5 crore students who fall into the minority category. It has to be noted that there is an eligibility criterion for the scholarship that the student’s annual family income should not be more than 6 lakhs. An Economics Times article reports that 92% of Indian adults earn Rs 6.5 lakhs or less per annum. It is also to be noted that India has a student population of around 31 crores. Thus his claim that scholarships cannot be given to 5 crore students in the next 5 years cannot be considered true.

So, with the new announcement, the government is planning to increase the number of students benefitting from these schemes.

Update: User has now issued a clarification and has accepted that the scholarship scheme is indeed for minorities.