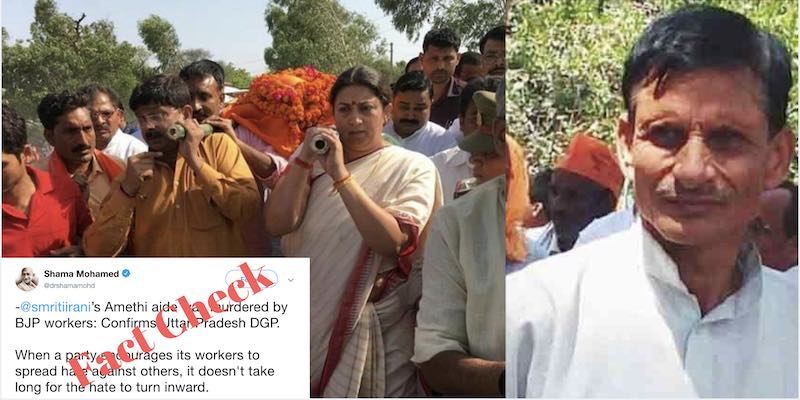 The DGP hasn't named any political party in the murder case of Smriti Irani's close aide but still, the Congress leaders deliberately distorted the comment of DGP to claim that Smriti Irani's aide was murdered by BJP workers.

Shama Mohamad, the national media panelist of AICC tweeted that Smriti Irani’s close aide in Amethi was murdered by BJP workers. She attributed her claim to the DGP of Uttar Pradesh. Her tweet reads:

When a party encourages its workers to spread hate against others, it doesn't take long for the hate to turn inward.

The same was tweeted by several people associated with the Congress Party. Ruchira Chaturvedi, the National Convenor of INC tweeted:

UP police confirms – Surendra Singh, close aide of Smriti Irani was murdered by BJP workers who were his local rivals and NOT due to some Congress conspiracy, as was being peddled. Shameful on part of BJP to do politics over death of their own karyakarta

Congress supporter Gaurav Pandhi tweeted "Surinder Singh, close aide of @smritiirani in Amethi, was murdered by fellow BJP workers due to internal feud. UP Police has splashed water over the conspiracy theories that were being peddled by Smriti Irani herself & BJP supporters blaming the Congress." 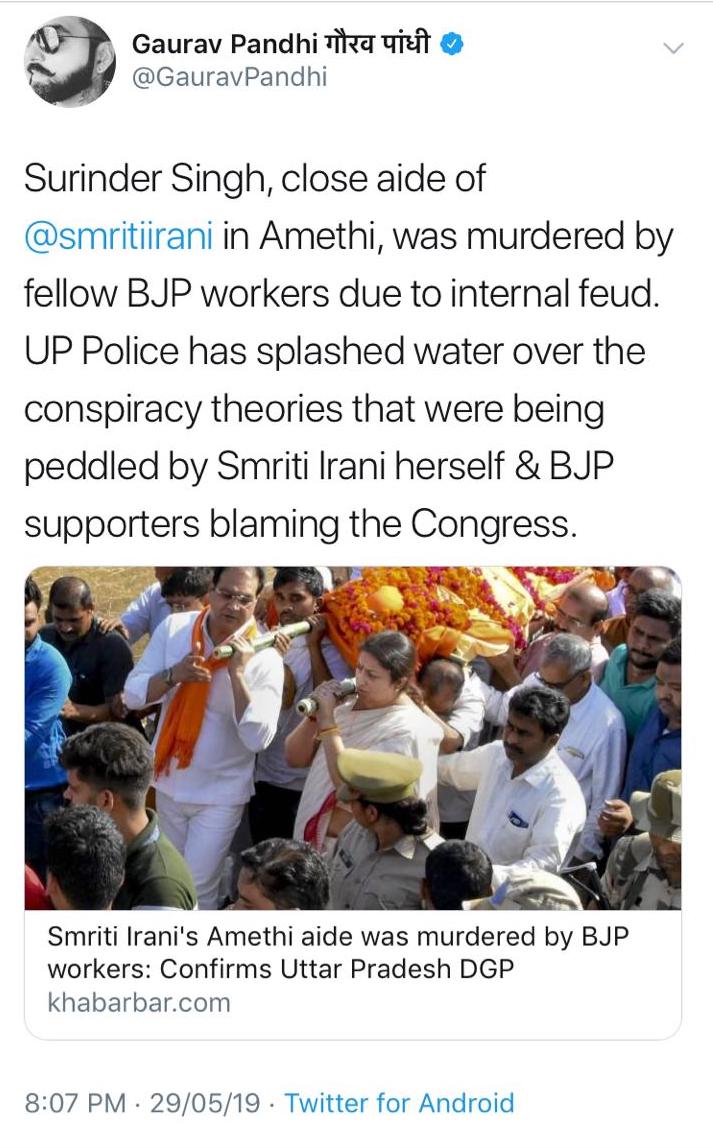 Chandigarh Congress Sevadal tweeted "UP Police confirms Surendra Singh close aide of Smriti Irani was murdered by BJP workers who were his local rivals and NOT due to some Congress conspiracy, as was being peddled. Shameful on part of BJP to do politics over death of their own karyakarta". 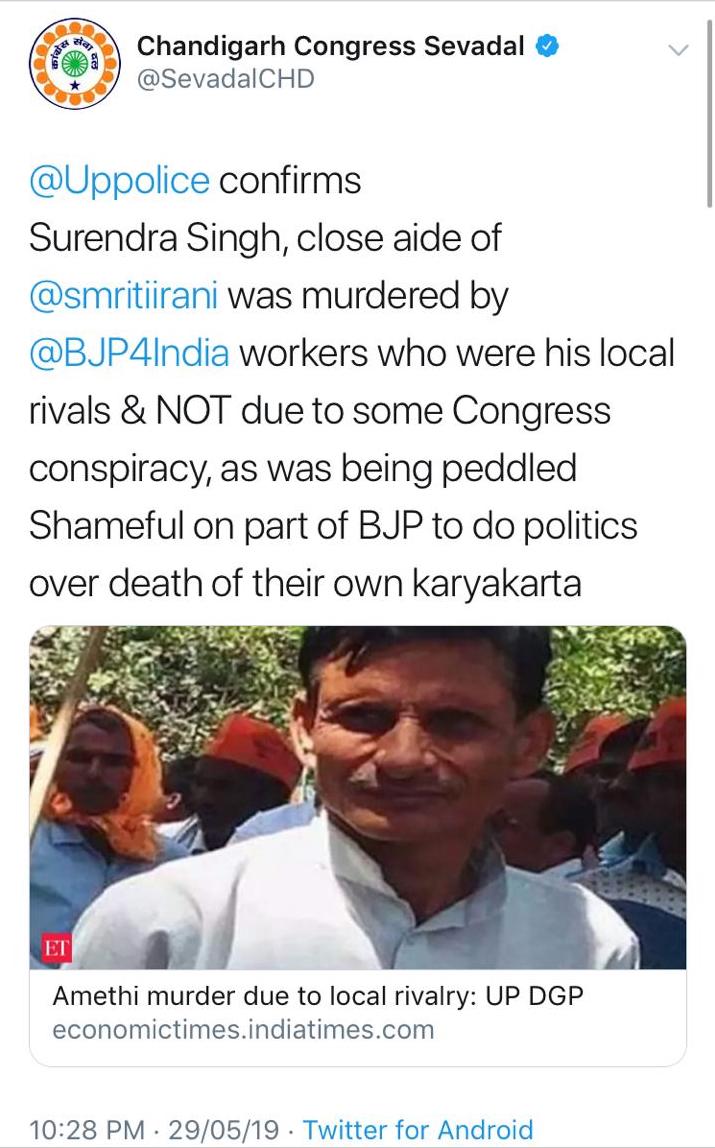 Chandigarh Congress Sevadal has shared a report by Economic Times but when we went through the report DGP hasn't taken the name of any political party in this case. ET has simply reported that he was murdered due to local political rivalry.

Director General of Police O.P. Singh said that on the basis of evidence, the victim had local-level rivalry. One of the accused wanted to contest the panchayat election but Singh was supporting another aspirant.

Wasim, Nasim, Golu and Ramchandra have been booked for the murder while the fifth person, identified as Dharamnath Gupta, has been charged with conspiracy to kill the BJP leader.

All the Twitter handles making this claim has shared a media report by Khabarbar.com whose headline reads "Smriti Irani's Amethi aide was murdered by BJP workers: Confirms Uttar Pradesh DGP". 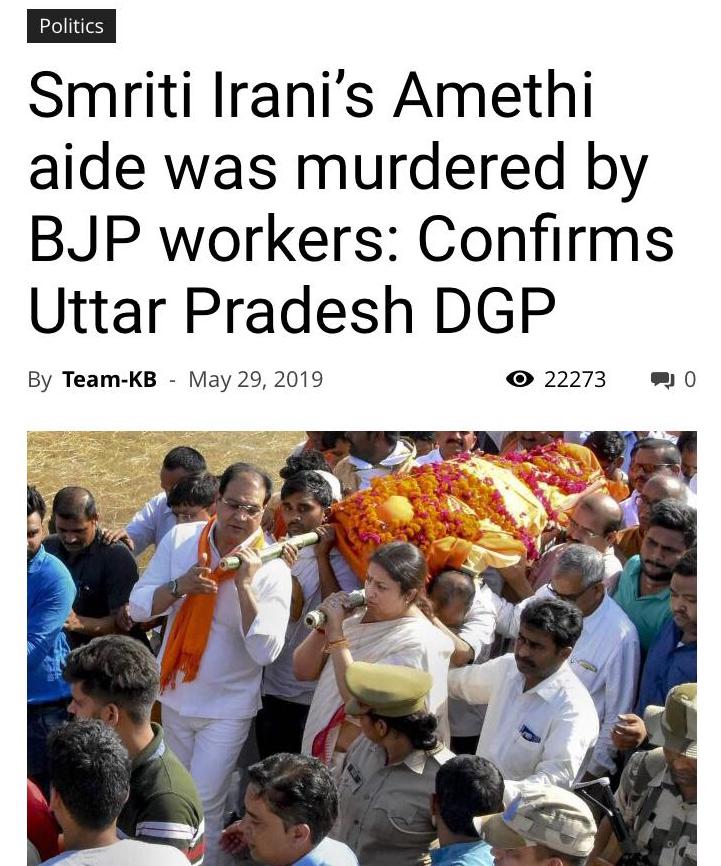 Claim Refuted by UP Police

The official Twitter handle of UP Police tweeted that this is a deliberate distortion of facts, and said that the reports they are quoting itself do not say that DGP named any political party was involved in the crime. They also informed that they are forwarding the tweet to Amethi police for taking legal action of spreading the rumour.

After this tweet by UP Police, Ruchira Chaturvedi and Chandigarh Congress Sevadal deleted their tweets without offering an apology. Gaurav Pandhi also deleted his tweet but instead of apologizing, he floated his own conspiracy theory.

Khabarbar.com also updated their article to remove the portion where they had claimed that the murder was done by BJP workers. Their new title reads "Smriti Irani’s Amethi aide was murdered due to personal feud: Confirms Uttar Pradesh DGP".

Conclusion: The DGP didn’t name BJP or any other political party in this case but still the Congress leaders are deliberately distorting the comments of DGP to claim that Smriti Irani's aide was murdered by BJP workers.

Gaurav Pandhi has floated a conspiracy theory that since there was rivalry due to Surinder Singh's support to a candidate for local elections which the accused wanted to contest, it was an internal rivalry inside BJP.

His assumption that since Surinder Singh favoured one candidate over the other it must be a fight within the BJP is wrong. Several scenarios can be imagined from the statement of DGP.

Scenario 1:  What if the accused joined Congress after not receiving the support of Congress? Does Mr. Pandhi have any proof that this didn't happen?

Scenario 2: What is the proof that the accused was a BJP member when he wanted to contest the Panchayat election? Just because he asked for Surinder's support, it doesn't mean that he was a BJP member at that time.

Clearly, Pandhi's assumption is his own confirmation bias and nothing else which is clearly evident from his language.