Separating facts from rumours: Sadhvi Pragya's acquittal and terror charges against her 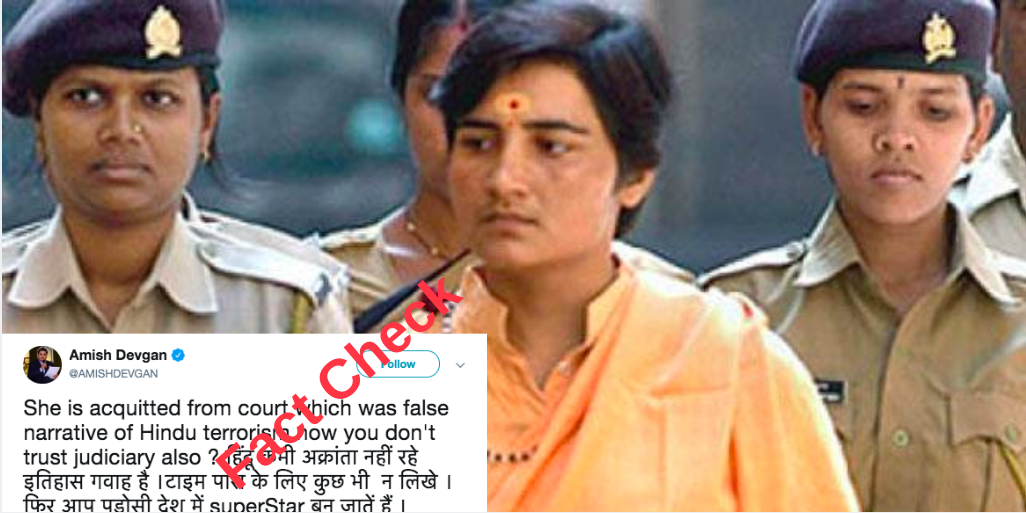 On the other handle, several BJP supporters claimed that Sadhvi Pragya has been acquitted of terror charges. While replying to Swara Bhaskar, journalist Amish Devgan tweeted "She is acquitted from court which was false narrative of Hindu terrorism now you don't trust judiciary also ?".

Another Twitter user @trulyMonica tweeted "Today I learned that Sadhvi Pragya who has been acquitted of all charges is Malegaon blast case accused but Jagdish Tytler is a Congress leader".

Social media and IT head of BJP Delhi, Punit Agarwal tweeted "Sadhvi Pragya was just accused and has been acquitted by NIA court. And everyone knows she was framed while This man goes to the court in midnight to defend a convicted terrorist. The condition of our judiciary is such because these hypocrites unfortunately became lawyers."

She has been acquitted of terrorism charges under Maharashtra Control of Organised Crime Act (MCOCA). It is important to note that charges under MCOCA were dropped against all the accused in the Malegaon blasts case, including Sadhvi Pragya.

Sadhvi Pragya is currently out on bail but she still faces trial under sections of the Unlawful Activities (Prevention) Act (UAPA). she has not yet been acquitted. She was granted bail on health grounds. According to the bail order given by a Bombay High Court bench headed by Justice Shalini Phansalkar Joshi and Justice Ranjit More, she was given bail because she was "suffering from breast cancer" and "cannot even walk without support".

Sadhvi Pragya was also an accused in the 2007 murder case of former RSS pracharak Sunil Joshi. However, in February 2017, a Dewas court acquitted all the accused, including Sadhvi Pragya.

On September 29, 2008, a bomb hidden in a motorcycle went off near a mosque in Malegaon, a minority-dominated town, 200 km from Mumbai, killing six people and injuring over a 100. Anti-Terrorist Squad, led by its then chief Hemant Karkare, traced the motorcycle to Sadhvi Pragya Singh Thakur to whom it belonged. They unearthed the whole conspiracy from there. Sadhvi Pragya was named as accused number 1 in the charge-sheet filed by the Maharashtra Anti-Terrorism Squad (ATS) in this case.

2. For her participation in Bhopal meetings in which conspiracy to strike terror by exploding bomb in Malegaon was hatched.

It is alleged by ATS that, 'LML Freedom Motor-Cycle', bearing Registration No.MH-15-P-4572, was found at the spot of the incident in a severely damaged condition. According to prosecution, the number "MH-15-P-4572" was a fake number. The engine number as also the chassis number was also not visible. Hence, the motorcycle was referred to the FSL Nasik for determining its engine and chassis numbers. As per the report of FSL Nasik dated 7th October 2008, it was not possible to find out the chassis number and even the engine number could not be determined with certainty. The report suggested that the engine number of the said vehicle could be any of the following three numbers :

They further informed that these vehicles were sold to the dealers at Surat and Badayu respectively. On 10th November 2008 on the basis of the statement of the financer, the prosecution for the first time came to know that vehicle bearing Engine No.E55OK261886 was registered in the name of Appellant and its number was "GJ-05 BR-1920".

Thus, there is enough doubt that the motorcycle belonged to Sadhvi Pragya or not.

The National Investigation Agency (NIA) took charge of the case in April 2011 and filed a charge sheet in 2016. This charge sheet said that there was no evidence to link Sadhvi Pragya to the case and, therefore, she should be discharged.

MCOCA was dropped against Sadhvi Pragya as per the recommendation by NIA but the court dismissed the agency's plea for her acquittal and ordered that she would face trial under the UAPA. The court said that both ATS and NIA charge-sheets have to be evaluated on merits during the trial.

As per NIA the bike which had served as primary evidence in the ATS's charge sheet had been used by Ramchandra Kalsangra for at least two years prior to the blast, with him even paying for repairs – and so it was not relevant that it was still registered in Sadhvi Pragya’s name.

Note: In the ATS' charge sheet, the motorcycle was provided by Sadhvi Pragya to Ramchandra Kalsangar, who along with Sandeep Dhange (also known as Sandeep Dange), executed the attack.

In October 2018, the NIA court framed charges against Sadhvi Pragya and six others under Sections 16 (committing a terror act) and 18 (conspiring to commit a terror act) of UAPA, and under the Indian Penal Code for murder, criminal conspiracy and promoting enmity between communities.

Eligible to contest an election

As per Section 8(3) of The Representation of the People Act 1951, if a person is convicted of any offence and sentenced to an imprisonment of two years or more, he/she will not be able to contest election for a period of six years since his/her release.

Since Sadhvi Pragya has never been convicted by any court, she is eligible to contest elections.