Fact Check: Was a Youth arrested for questioning Goa minister about unemployment? 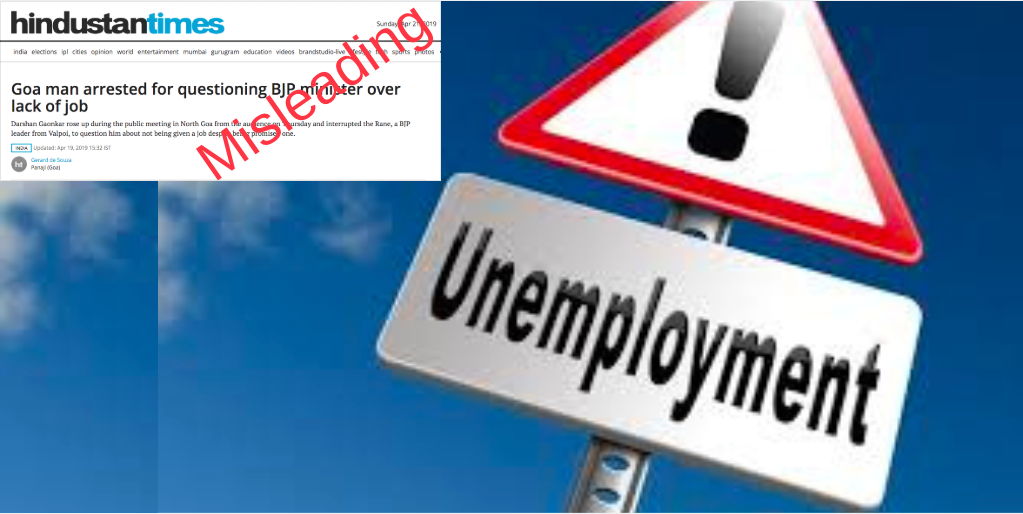 New 18 and Hindustan Times used a misleading headline to claim that youth was arrested for questioning Goa minister about unemployment or lack of jobs. It was a personal job request which he didn't get even after working under the minister for over a decade.

A reader had tweeted to us recently to verify the claims about a youth being arrested for questioning the Health Minister of Goa Vishwajit Rane about unemployment. This was recently reported by several agencies such as The Hindu, Times of India, Hindustan Times and News18. 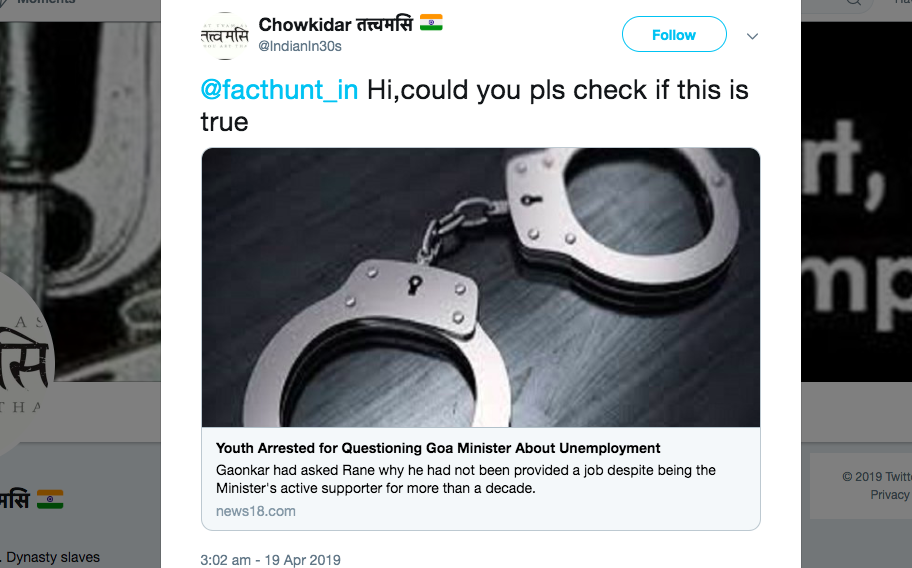 Let us look at the incident as reported by the above agencies. It is seen that on April 17th Rane had attended a BJP campaign meeting for the party’s candidate and Union Minister Sripad Naik. In this event, Rane was questioned by a youth named Darshan Gaonkar about how he had not received employment that was promised by the minister even after working under him for over a decade. This led to the youth being arrested under Criminal Procedure Code section 151 at the Valpoi police station and was later released on bail. According to section 151, it "recognises and confirms that if the Code does not expressly or impliedly cover any particular procedural aspect, the inherent power can be used to deal with such situation or aspect, if the ends of justice warrant it". Valpoi police station has also stated that the complaint was made anonymous.

Gaonkar gave a media claim on Friday saying that "I only asked him why I was not given a job despite being promised one for several years now. At the meeting I was only raising a question about a job promise made to me by the Minister, which was not fulfilled and I was arrested after the meeting ended," and this was reported by News18. However, an official source close to Rane had said that "There is a way to put up a question. Darshan was unruly and was instigated by the opposition to embarrass everyone and cause chaos. Perhaps someone filed a complaint against him." These claims and actions of the Minister have been heavily condemned by Congress claiming that the BJP is “misusing” its power. The Congress ministers of that specific area have also highlighted the unemployment problems and land issues and even demanded Rane’s resignation.

Thus, it can be concluded that this news is indeed true. However, the claims of Gaonkar being prompted by the opposition and some aspects of the news seem uncovered and no official reports have been submitted. A noticeable aspect can be the quite misleading headlines used by News18 and Hindustan Times. The News18 headline read “Youth Arrested for Questioning Goa Minister About Unemployment” while the Hindustan Times article read “Goa man arrested for questioning BJP minister over lack of job”. This makes it seem as if the youth was arrested for questioning unemployment in general whereas it was a personal request. It is important to formulate a non-misleading headline avoiding unnecessary sensationalism as this may promote a wrong idea to readers.