Fact Check: No, Govt is not giving Rs 4 Lakh Compensation to kin of those who died From Coronavirus.

The viral claim is false that under the Disaster Management Act and the Epidemic Act, the government of India is giving a compensation of Rs 4 lakh to the relatives of the person who lost their life from Coronavirus.

A post is getting viral on social media in which it is being claimed that under the Disaster Management Act and the Epidemic Act, the relatives of the person who lost his/her life from Coronavirus is entitled to get Rs 4 lakh as compensation.

A Facebook user name Anantha Kalyana Krishna shared a post with a claim that "Relief under Central Govt schemes for Dependants of Corona victims. As per the directives under the Disaster Management Act and pandemic act, Legal dependents are entitled to receive Rs 4 lacs as compensation for any person who died due to Covid 19.attached is the Govt circular and Claim form. Pl go through it and pass it on to the needy". 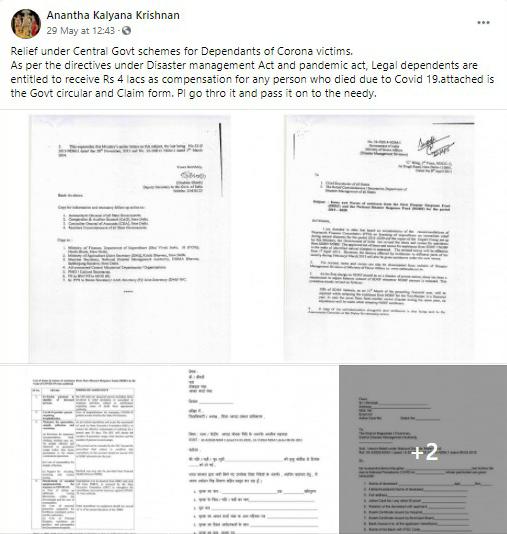 A circular of the Disaster Management Department of the Union Home Ministry is also attached in the viral post, according to which it was issued on 14 March 2020. It has been said that the government will give Rs 4 lakh under the State Disaster Relief Fund (SDRF) as help to the families of those who died of the corona. Along with this, the same amount of assistance will be given by the government on the death of the employees engaged in the Corona Relief Operation. People are accepting this claim as true and are also sharing it indiscriminately. 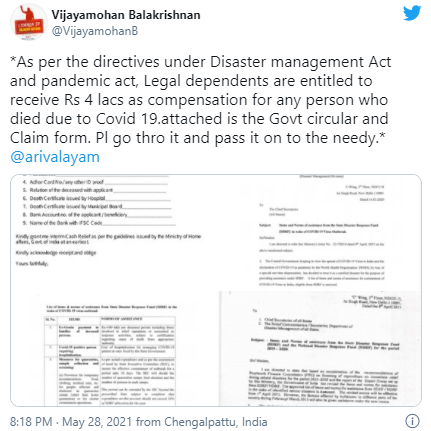 In our investigation, we found that the viral claim is misleading. The announcement was made in March 2020 but this decision was withdrawn on the same day.

After doing keyword research on google, we found a tweet by news agency ANI dated March 14, 2020, in which the Union Ministry of Home Affairs was quoted as saying that "The government has decided to treat #COVID19 as a notified disaster for the purpose of providing assistance under the State Disaster Response Fund (SDRF)".

ANI made another tweet, on the same day, which quoted the Union Home Ministry as saying that the provision of compensation to the families of those who died of the corona was removed. In this, there was mention of treatment, isolation, and other facilities for the victims. But the ex gratia or compensation line was removed. 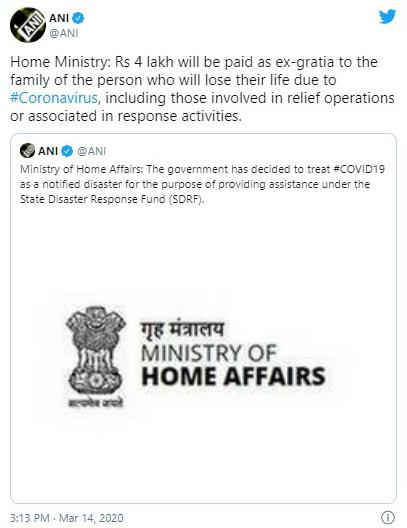 A report was also found on the website of  'Aajtak' on March 14, 2020, in which it has been mentioned that after the death of Corona, it has been decided to give a compensation of 4 lakhs to the relatives of the deceased.

Shortly following news regarding the Government giving Rs 4 Lakh compensation to families of those who died from Coronavirus went viral, the fact-check wing of the Press Information Bureau of India ( PIB fact-check ) took Twitter to clarify that the viral claim is fake. 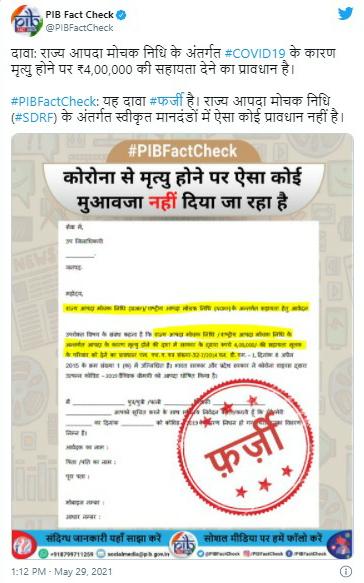 However, it has been said in many reports that a petition has been filed in the Supreme Court for compensation of Rs 4 lakh to the corona victims. The matter is pending in court and the next hearing is on June 11, 2021.

In conclusion, the viral claim is false that under the Disaster Management Act and the Epidemic Act, the government of India is giving a compensation of Rs 4 lakh to the relatives of the person who lost their life from Coronavirus. The announcement was made in March 2020 but this decision was withdrawn on the same day.