The government has not announced officially when schools would be open and till when they would not re-open.

A news platform ‘Simplicity’ had recently published an article claiming that the Central Government has reportedly said that schools will not be reopened at least until December. This news, however, is fake and misleading.

This news was confirmed to be false by the Press Information Bureau’s fact-check page. They had tweeted out informing that no such decisions have been taken by the government. The tweet by PIB reads, "A news agency has reported that the Central Government has decided to not re-open schools until December. #PIBFactCheck: Government has not made any such decision". 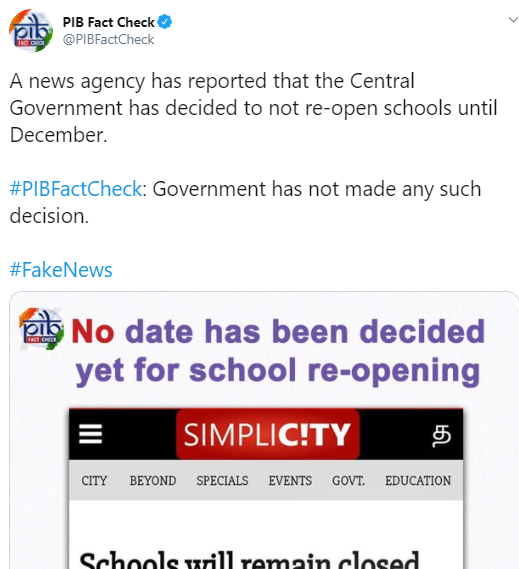 simplicity.in was quick to change its headline after PIB's clarification and corrected the story. The new headline reads "Schools may remain closed until December - Central Government sources". However, the old misleading headline is still there in the URL of the story as highlighted in the screenshot below.

We also did not find any other article reporting this misinformation.

Furthermore, this is not the first time that misinformation about school reopening has been published. Recently, another story which claimed that the center has decided to reopen schools between September 1 and November 14 in a phased manner was debunked by the PIB fact-check account. A few months ago, India news had broadcasted that the MHA permitted all states to open schools and this was also debunked by us.

As of now, the government has not announced officially, when schools would be open and till when they would not re-open. In order to avoid misinformation related to the reopening of educational institutions, refer only to Government news sources.