The viral claim that Suhrita Das posted condolence message to Rhea Chakraborty hours before Sushant's death is false. The screenshot was either taken from a country that is 4:30 hours behind the Indian timezone or by changing the device's timezone.

Bollywood actor Sushant Singh Rajput had allegedly committed suicide on 14th June 2020. After his death, his fans have been floating different theories surrounding his death. From nepotism, the focus has now shifted to his girlfriend Rhea Chakraborty after Sushant's father had filed a police complaint against Rhea in Bihar. He accused her of the abetment of suicide and misappropriation of Sushant's money.

Amid this, a Twitter user Darshan N. Popat tweeted a screenshot of a Facebook post by Suhrita Das in which she shared a condolence message for Rhea Chakraborty.

While sharing the screenshot, the user wrote, "Curious case of SuhritaDas who posted condolence message to Rhea on #SushantSinghRajput demise at 11:08 AM on 14-6-2020? However, Sushant's death came into public-domain post 3 PM only. As Per sources, SuhritaDas works for MaheshNBhatt office." He further writes, "How did SuhritaDas knew in Advance earlier at 11.08 am on 14/6/20 Death of SushantMurder ? Also is it true that SuhritaDas tweeted at 11.08 am,14/6/20 on death of #SushantSinghRajput when #SidharthPithani and gang were searching for keys of Sushant room?" He further shares a screenshot of a tweet claiming her post at 11:08 am was deleted and then re-posted at 3:38 exactly four and half hours later. 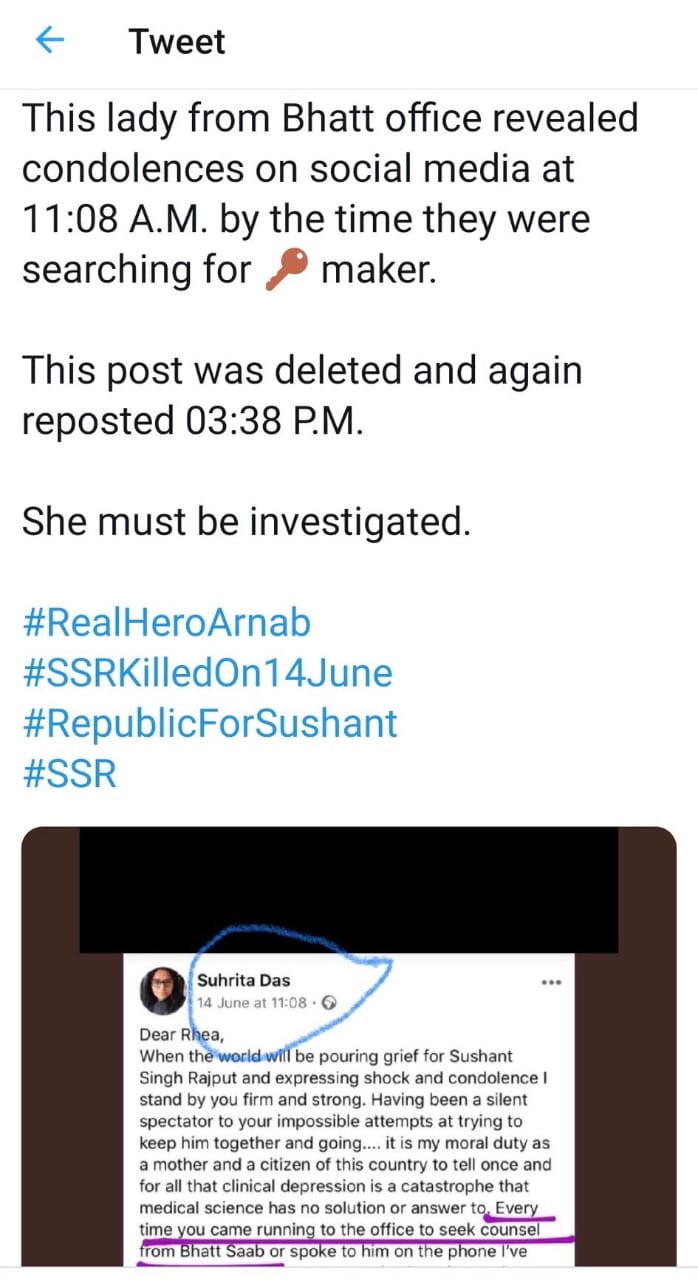 You can view the archived version of the tweet here.

The user is trying to imply that Suhrita Das posted the message hours before the news of Sushant Singh Rajput's death broke out in media.

The user has tried to propose a controversial theory linking Mahesh Bhatt with the death of Sushant. We will not get into these details and will limit the scope of Factcheck to whether Suhrita Das posted the condolence message to Rhea Chakraborty hours before Sushant's death or not.

The first question we will try to answer is how Facebook shows the time of the user posts. Usually, when we post something, Facebook stores the UTC timestamp in its database. UTC is Coordinated Universal Time. UTC is 5:30 hours behind Indian Time Zone (IST). So, if we post something at 12 pm, Facebook will store the timestamp of 6:30 Am. But in our app, it will show 12 pm if the timezone of our mobile or desktop is set according to Indian Timezone. It's because Facebook picks the time zone from the device (Mobile or desktop) and converts the UTC time to the local time.
So, if a user is viewing the same post from London, United Kingdom, it will not show 12pm but 7:30 because London's time is 4:30 hours behind IST and 1 hour ahead of UTC due to daylight saving.

Daylight Saving Time (DST) is the practice of setting the clocks forward one hour from standard time during the summer months, and back again in the fall, in order to make better use of natural daylight. This is a common practice in European countries.

So, the screenshot shared by the Twitter user Darshan was either taken from some country which is 4:30 hours behind IST or by changing the timezone of the device.

Just to demonstrate, I changed the timezone of my Mac to London, United Kingdom and time of all the posts on my Facebook started showing 4:30 hours behind. You can see the video fo screen recording here:

When the timezone of my Mac was Bengaluru, Karnataka the time of the post shown in the video was 22:11 pm. But when I changed the timezone to London, United Kingdom, it started showing 17:41, exactly 4:30 hours behind.

Moreover, people are claiming that it was posted at 11:08 am which she deleted and re-posted at 3:38 pm. It means the screenshot must have been taken before she deleted the post i.e within few hours between 11:08 am - 3:38 pm. But Facebook never shows the exact time for recent posts. It shows hours or minutes before the post was published. You can see the below screenshot for reference.

Moreover, there is no concrete evidence like archived link is available to support this controversial claim.

In Conclusion, the viral claim that Suhrita Das posted condolence message to Rhea Chakraborty hours before Sushant's death is false. The screenshot was either taken from a country that is 4:30 hours behind the Indian timezone or by changing the device's timezone.