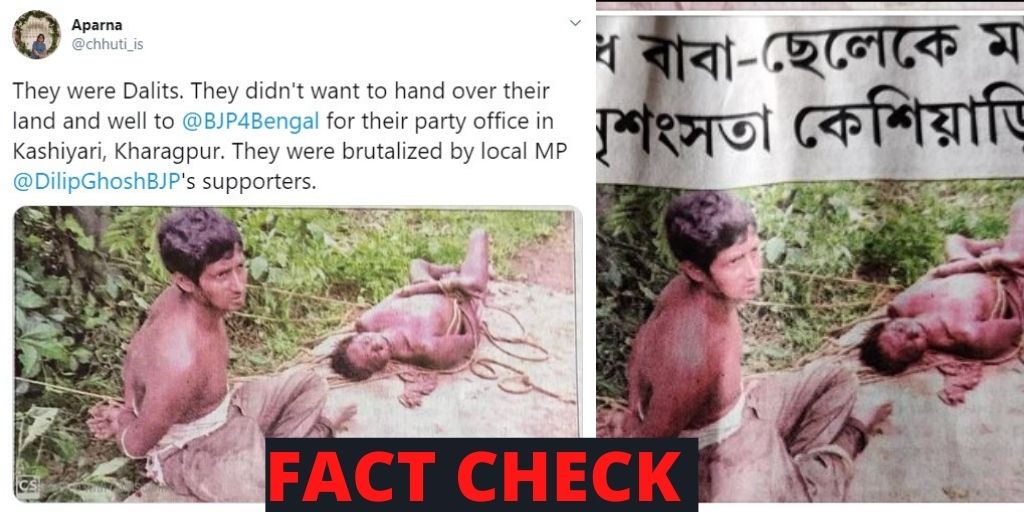 The viral image is from an incident when Bimal Bagh and his son were attacked allegedly by local BJP workers over a land dispute in Kharagpur's Keshiyari village. Police have registered a case in the matter. The reason for the dispute is not verified yet.

Recently, an image was widely shared on social media platforms claiming that Dalits in Kharagpur's Keshiyari were brutalized by supporters of local BJP Dilip Ghosh. In the viral image, one can see two men with bare upper bodies, and their hands were also tied at their backs with ropes.

A Twitter page named 'The Dalit Voice' shared the image with a caption, "#Bengal They were Dalits. They didn't want to hand over their land and well to #BJP for their party office in Kashiyari, Kharagpur. They were brutalized by local BJP MP Dilip Ghosh supporters @MamataOfficial  look into this matter and take strict action." 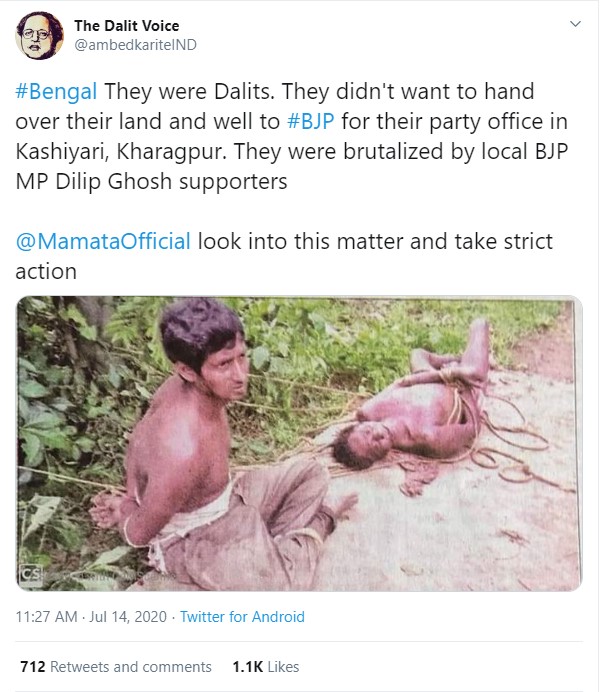 A user named Aparna shared the image with the same caption. 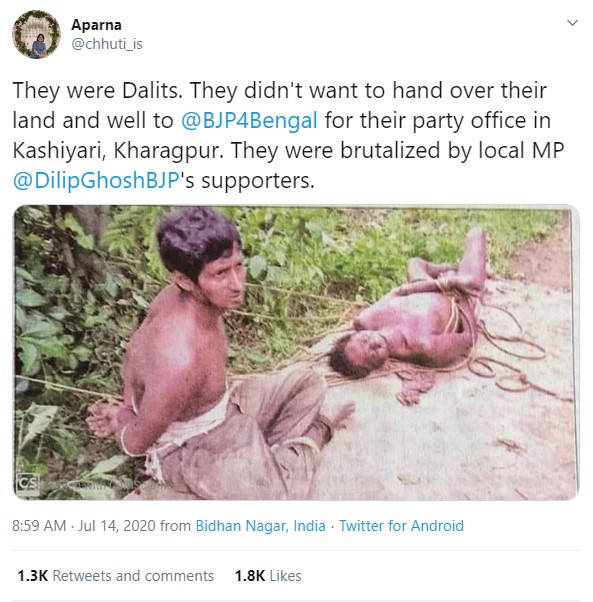 The image is viral on Twitter with the same claim.

A Facebook user shared the viral image along with the picture of a news report on this incident, published in a Bengali newspaper. 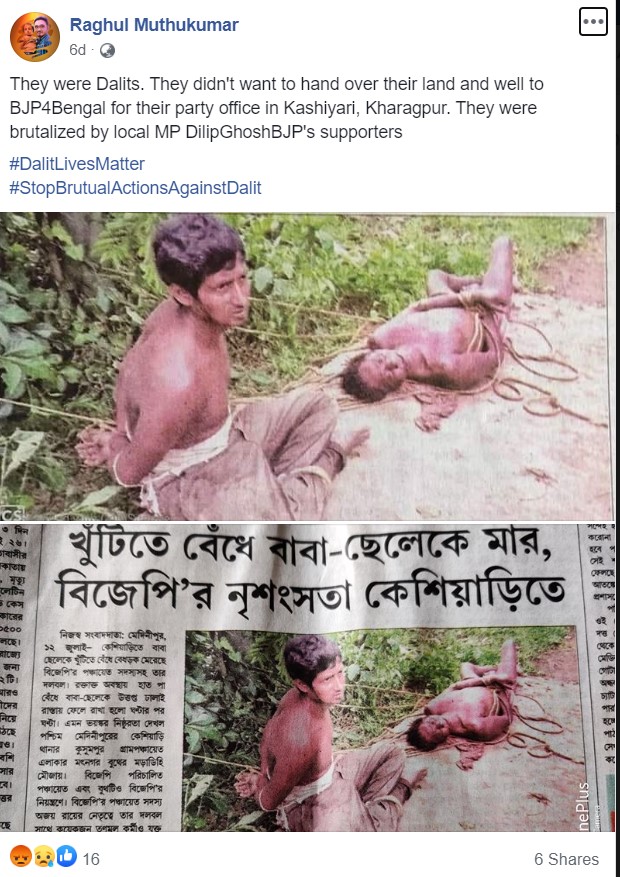 Keshiyari is a village in Kharagpur Subdivision of Paschim Medinipur district in the state of West Bengal. Whereas Dilip Ghosh, a well-known politician from West Bengal is a Member of Parliament representing the Medinipur constituency in Lok Sabha.

In our investigation, we were able to ascertain that image is a from a recent incident that took place in Keshiyari village where a father and son were allegedly beaten by some local members of BJP over a land dispute.

With the help of relevant, we found a news report by the Bengali website Ganashakti published on July 13. According to the report, Bimal Bagh and his son Krishna were attacked by grassroots activists. Reportedly, Bimal and his son were attacked by a group of men and beaten with wooden sticks. Bimal was quoted saying that he and his son were left on the road bleeding. They were later rescued by Police who also registered a complaint about the incident and initiated an investigation. However, there is no mention of a 'Dalit' angle in the report.

We reached out to Medinipur police for their official statement on the incident and to know whether the claims being made on social media are true or not, however, we got no response even after trying several times. They simply refused to give any details.

West Bengal Youth Congress also tweeted about the incident saying, "Father and son were tied up and beaten by BJP workers and later left on the street. Their family alleged that local BJP wants to occupy their land illegally for the BJP party office." Notedly, WB Youth Congress also did not point out that there is a Dalit angle. 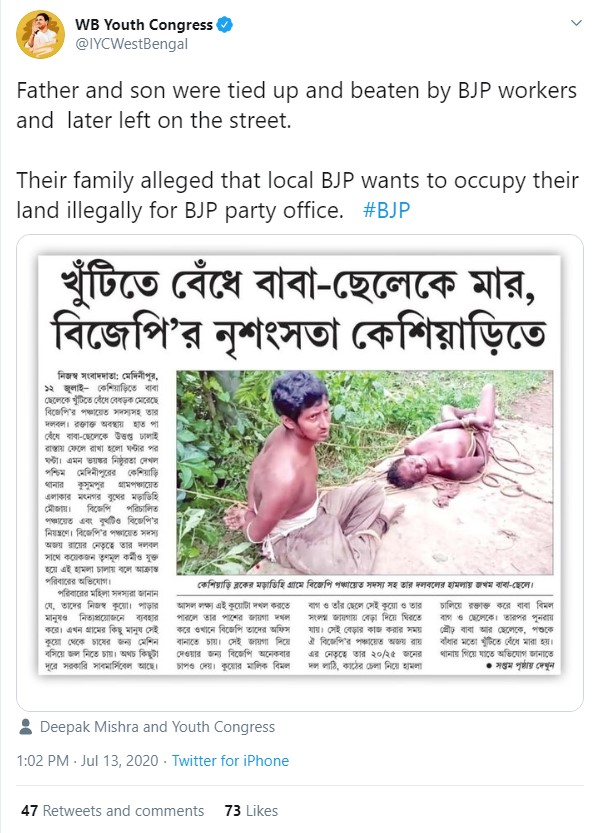 The viral image is from an incident when Bimal Bagh and his son were attacked allegedly by local BJP workers over a land dispute in Kharagpur's Keshiyari village. Police have registered a case in the matter. The reason for the dispute is not verified yet.