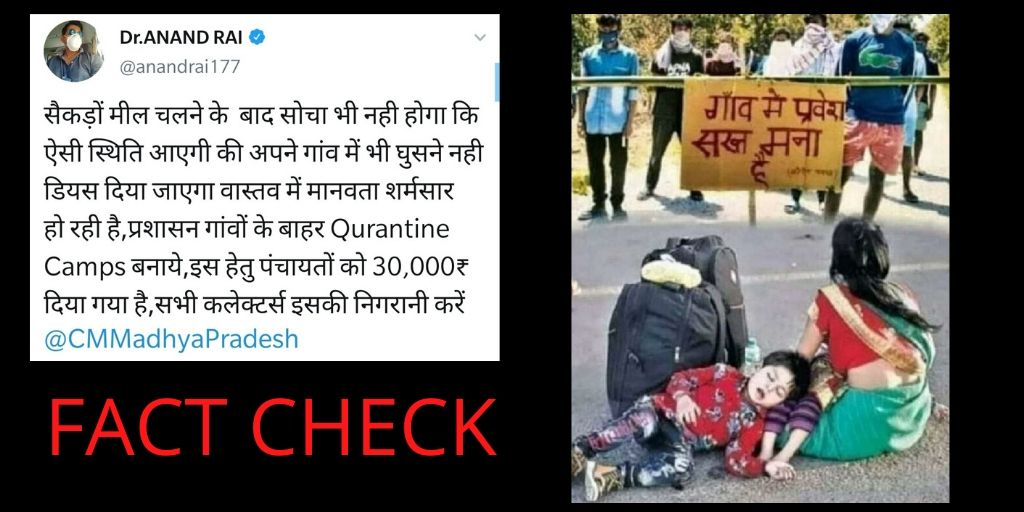 An edited image using two different images of two different incidents from Chhattisgarh and Delhi was being shared to show the plight of migrant workers in Madhya Pradesh.

A twitter user named Dr. Anand Rai who is a civil rights activist according to his twitter bio shared an image showing the plight of migrant workers in Madhya Pradesh. The image was shared with the caption, "After walking hundreds of km, they might haven't even thought that they won't be allowed to enter in their villages. Village authorities should set up quarantine camps outside the village, they have been given Rs 30,000 for it. DM should overlook the arrangements."

In this image, one can see a woman sitting on the road along with two kids, on the other side, some men are standing on the village gate which has a boarding with "entry in the village is prohibited" written on it.

In our investigation, we found this image that is an edited image and is not from Madhya Pradesh.

With the help of reverse image search, we found that this image has been edited using two different images of two different incidents into a single one, to present a false picture.

The first image of men standing near the village gate is from Chhattisgarh which was published in one of India Today's reports on March 25. The second image of Women was published in a news report with a caption that suggests it is from Delhi and is being shared on social media since March 29.

This image has been edited to deliberately present a false picture and to spread fake news.

In conclusion, an edited image using two different images of two different incidents from Chhattisgarh and Delhi was being shared to show the plight of migrant workers in Madhya Pradesh.