A detergent brand Surf Excel and its parent company Hindustan Unilever Limited (HUL) has faced backlash on social media for an ad on Holi. You can watch the ad here:

Many users on social media started a campaign to boycott the brand because they considered the ad anti-Hindu.

Amid the controversy, a tweet by Times of India is going viral on social media which reads "As a result of massive boycott by the hurt Hindu community because of a Hindu shaming derogatory ad by Surf Excel, the company has already faced loss amounting close to Rs 10 crores which is expected to rise further."

A Twitter user tweeted the screenshot with a caption "we should #BoycottSurfExcel .we can't tolerate this#BoycottHul". 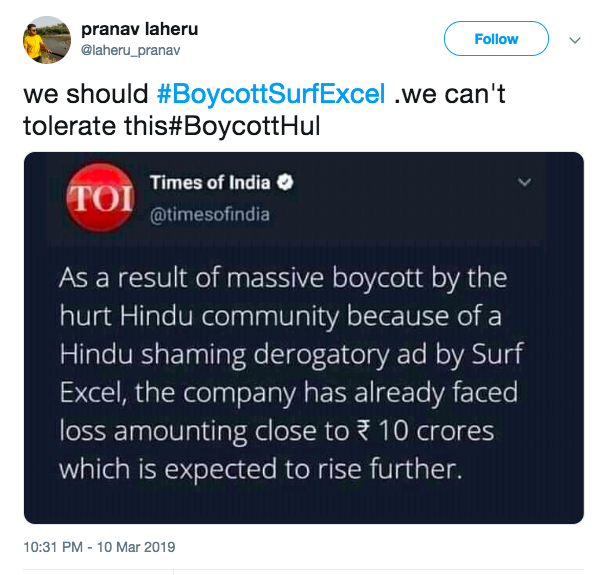 We searched for this tweet by Times of India but couldn't find any. We also looked for media reports but couldn't find any. We then carefully analysed the tweet and compared with a real tweet of Times of India. The logo and tweeter handle is the same. But we found that the logo and text are not properly aligned. Notice the highlighted section in the picture below which shows that the tweet screenshot is digitally created.