A video of the Naga sadhus chanting 'Har-har Mahadev' in large numbers on the road is being shared with the claim that these sadhus have come out on the road of Prayagraj in support of the Citizenship Amendment Act (CAA). You can watch the video here:

A Facebook user name Sant Bhavana didi shared the video with a caption “Large number of naga sadhus came on the street in Prayagraj to show their support for CAA. My country is changing”. 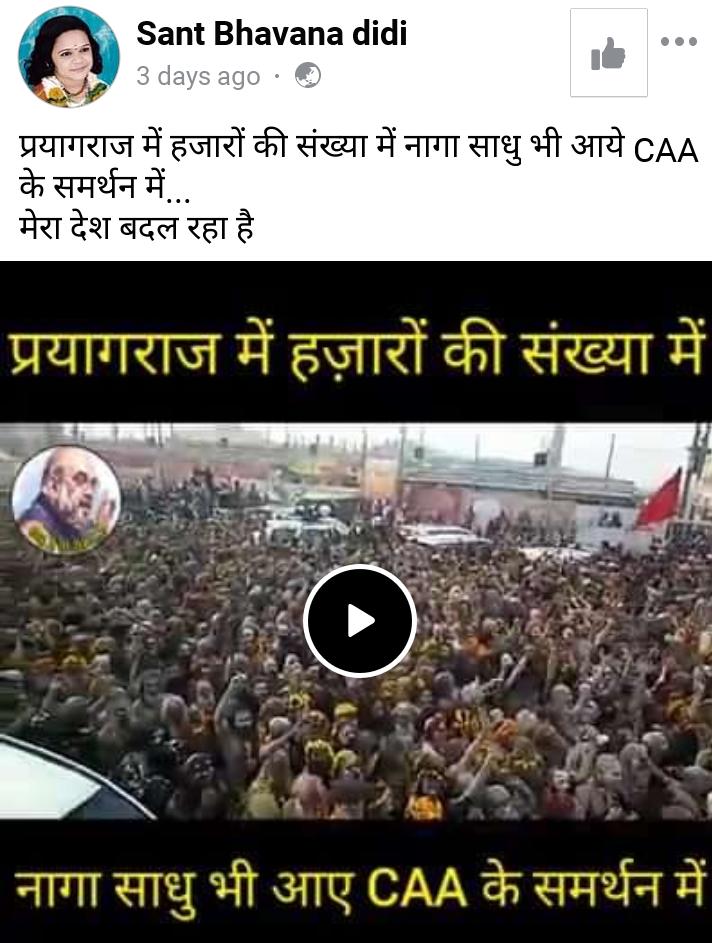 The viral video received 74 likes and 4,400 views at the time of writing this article.

In the investigation, we found that the video is from the Kumbh Mela held in Prayagraj, Uttar Pradesh in 2019. The Video has no connection with CAA.

We search on Facebook using keywords ‘naga sadhu Kumbh Mela’ and found a video on Facebook published by GDTV on 7th March 2019 in which the visuals were exactly the same as in the video that is now going viral.

Here is the comparison of the screengrabs of both the video.

On searching the keywords 'Kumbh Mela 2019 naga sadhu' on Google, we found many news reports and videos that mention thousands of Naga sadhus taking out processions during the Kumbh Mela.

However, We did not find any reliable media reports which are linked with Naga sadhus taking out a rally in support or opposition to CAA.

The claim that Naga Sadhus came out in the support of CAA in Prayagraj is false. The viral video is nothing to do with CAA and was recorded when thousands of Naga sadhus took out processions during the Kumbh Mela in 2019.