On Dec 19, Congress leader and MP from Thiruvananthapuram Shashi Tharoor tweeted a picture of historian Ramachandra Guha to suggest that Bengaluru cop threatened him to hit with a fist.

His tweet reads, "Is this cop threatening to hit ? @Ram_Guha ? with his fist? It’s bad enough to arrest a senior historian exercising his democratic right to protest. But to do so with the threat of force is disgraceful & the cop deserves stern disciplinary action. Does the Home Minister care?". 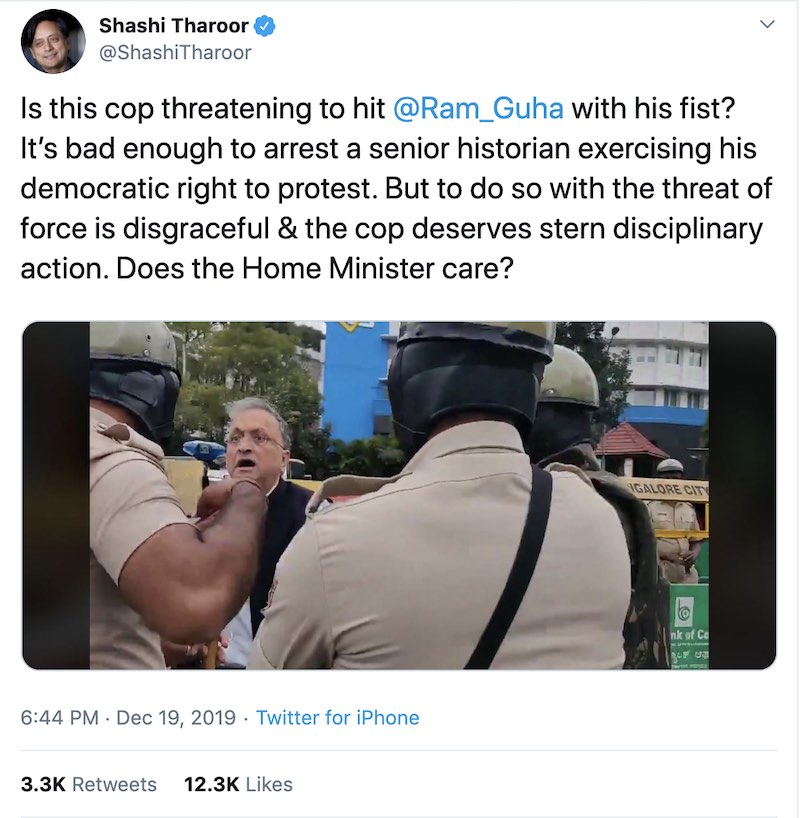 Several other verified handles have made a similar claim.

A verified Twitter handle Utsav Bains tweeted the video of the incident and wrote, "India’s most respected voice @Ram_Guha dragged & threatened with a fist by Bengaluru Police for speaking to d Press about CAA-NRC, In France when Sartre was arrested during a protest, President CharlesDeGaulle said - You don't arrest Voltaire-Do we have such Statesmen in India ?"

In the picture shared by Shashi Tharoor, his fingers are pointed towards his pocket on the chest. It was also confirmed in the video, that the cop never formed a fist and his fingers were mostly open.

To confirm this, we slowed down the video to analyse the sequence of events when the picture shared by Shashi Tharoor was clicked. You can watch the slowed-down video here:

The slowed down video confirms that the cop was indeed putting his hand in the pocket and he never formed his fist.

The claim is false that Bengaluru cop threatened to hit ?historian Ramachandra Guha with his fist.