Muslim woman beaten publicly in India by Hindutva (BJP +RSS): No, it is a video of a husband flogging his wife 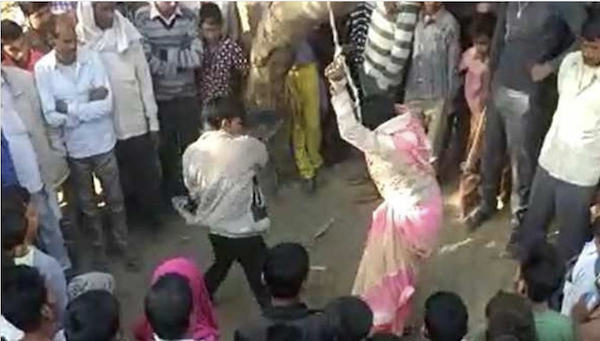 A disturbing video showing a woman tied to a tree by her wrists and being publicly flogged while the mob is a mute audience has gone viral with a claim that Hindutva forces (BJP and RSS) beating a Muslim woman in India.

The video was shared by a Pakistan based Facebook page PTI BANNU. 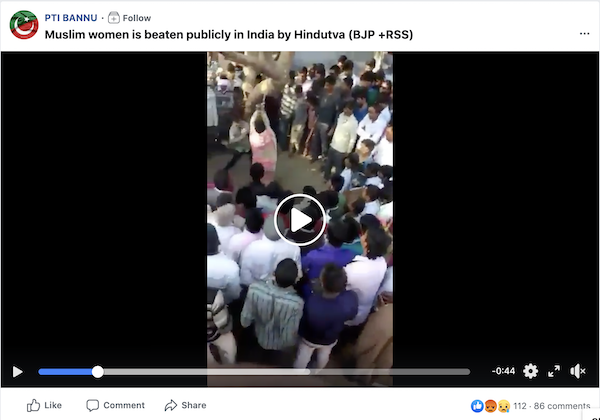 The 73-second video clip, apparently shot with a mobile phone, purportedly shows the saree-clad woman’s hands tied to an overhead branch of a tree and repeatedly hit with what appeared to be a leather belt by a man in a green shirt and a jacket. The woman could be heard grunting and screaming after each hit.

The video also shows a large crowd of men watching the beating and some of them can even be heard berating the woman.

The video has been shared by several Pakistani handles.

A Facebook user Amit Gangwar has also shared this video with a claim that a Hindu woman was beaten and then raped by Muslim Youths. 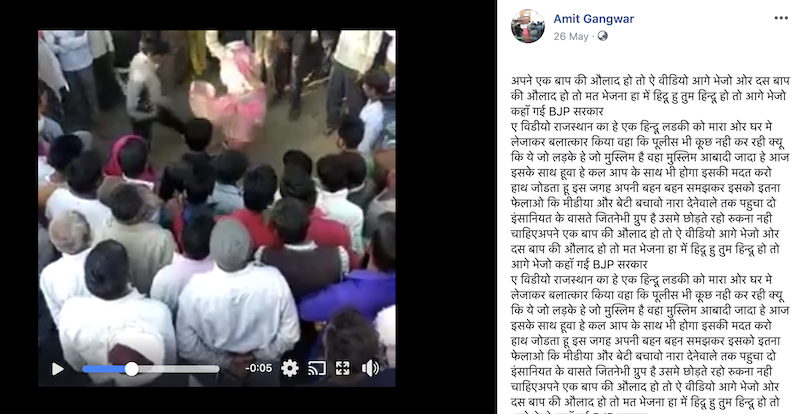 We did a keyword search on Google and found a video report by India TV dated 22 March 2018. You can see the relevant part from 11th second onwards. According to the report, the woman was being publicly flogged by her husband "on the panchayat's order for eloping with another man."

A reverse image of a key-frame from the video using the InVid Chrome extension led to a Hindustan Times article on the incident which was published on the same date as India Today report i.e 22nd March 2018.

The incident occurred on March 10 at Launga village, about 400 km from state capital Lucknow.

Bulandshahr superintendent of police Praveen Ranjan Singh said police registered a case against 18 people, 12 of them unidentified, after receiving a copy of the video clip. The woman’s husband, a former panchayat head and his son were arrested.

Police said the panchayat wanted to “teach a lesson to the woman”.

In her complaint to police, the woman admitted to eloping with her neighbour Dharmendra Lodhi on March 5 and staying at the house of one of his relatives in another village.

After five days, a group of people from Launga convinced the couple to return to their village.

Police said Shersingh and his supporters convened a kangaroo court and ordered her public flogging.

Some of the villagers had objected to the punishment and asked the former pradhan to stop it but they were abused and asked to leave the place.

After the beating, the woman was dragged into a room where Shersingh and his supporters allegedly molested her and asked to keep silent. The woman also accused Shersingh of asking his men to make a video of the incident so that others could see the consequences of eloping.

The incident was reported by India Today as well.

The claim that a Muslim woman was beaten publicly in India by Hindutva (BJP +RSS) is false. The viral video was recorded when a man ruthlessly flogged his wife on the orders of the panchayat for eloping with another man in Uttar Pradesh's Bulandshahr district.