Fact Check: A youth from Hindu community set ablaze by men of Muslim Community in Gonda 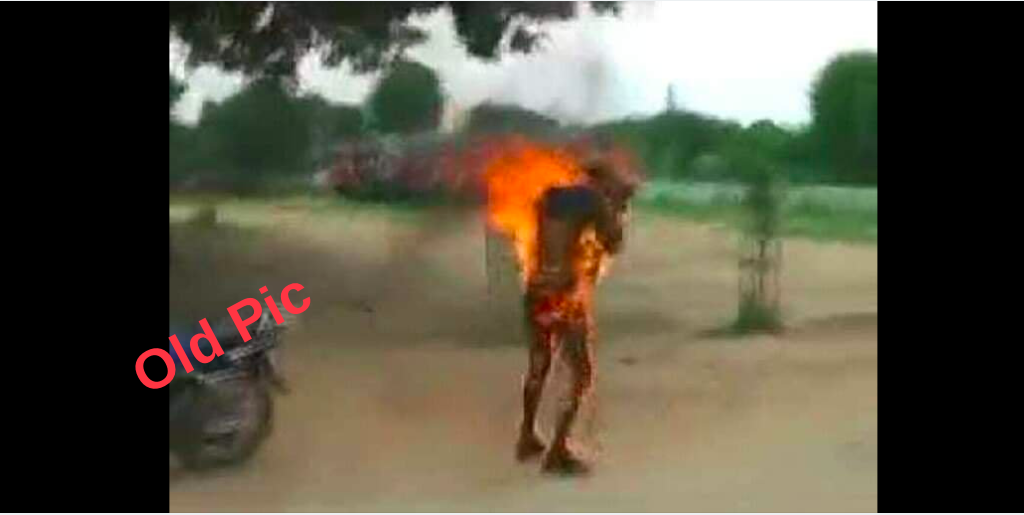 On 16th May, Abhijat Mishra tweeted a set of three images to claim that one Hindu youth was set ablaze by Muslims. The tweet reads:

In Gonda district of UP,  a Hindu youth was set ablaze by Four ‘messengers of peace’ – Imram, Ramzan, Nizamuddin, Tufail. Though the four jihadis have been arrested, but where is the the gang which keeps screaming mob lynching. 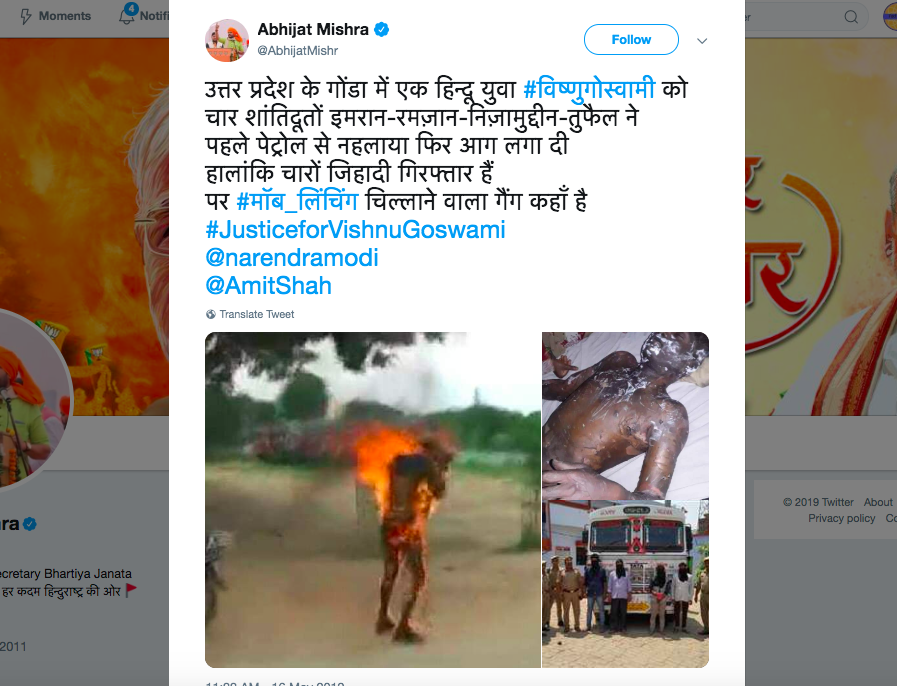 The same set of images was tweeted by many other users who were pointed to us by one of our readers.

The incident was first reported by a news website called Amarujala on 15th May. According to the report, Vishnu Goswami, the affected youth had reportedly gone to pick up his father Ramdi Goswami at Jamunia Bangh. The father and son had stopped at Gonga-Ayodhya highway to drink water. During this time a driver of a petrol tanker and few other men got into an argument with Vishnu following which the accused men doused Vishnu in petrol and burnt him alive. The accused are Imran, Tufail, Ramzan, and Nizamuddin. Vishnu who is said to still be in a critical condition was first taken to the district hospital and then to KGMU hospital in Lucknow.

According to official claims from the police, Vishnu and his dad had reportedly gotten into a heated argument and the men tried to calm the situation between the two, Vishnu had apparently started arguing with them as well, which led to the four accused men to use brutality.

The 4 accused men have been arrested based on police reports and based on Vishnu’s complaint they have also registered cases on the 4 on many sections including an attempt to murder.

We also checked the Twitter profile of Gonda Police and found that they have issued advisory about the incident to maintain the communal harmony. 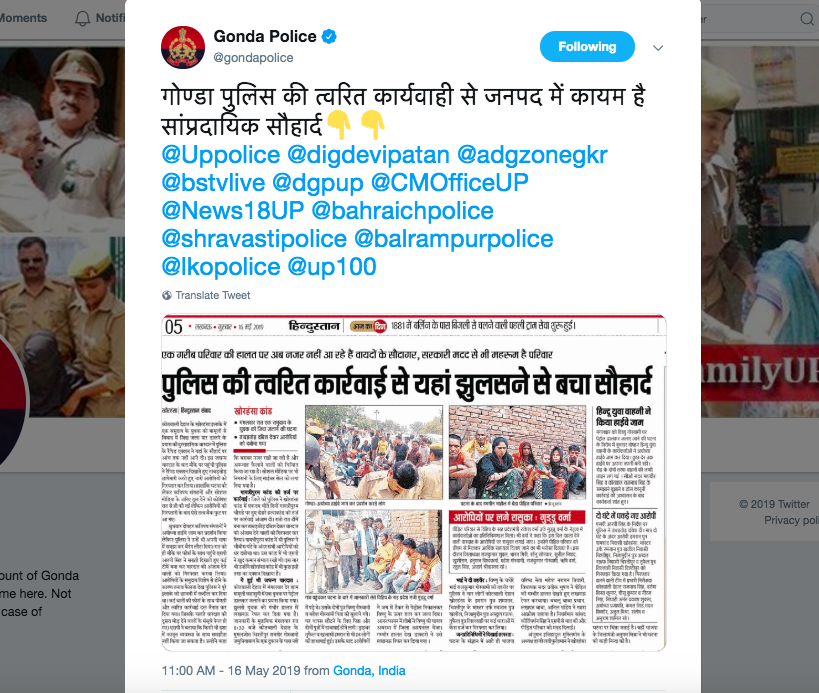 Gonda Police also tweeted that the viral picture of burning man is fake and not related to this case at all. The picture below is a statement from the Gonda police informs us that the 4 men accused have been arrested and it also highlights how many are spreading false rumours about the incident. Thus they also request us to be civil humans and not spread the graphic image and false rumours. Furthermore, the highlighted end sentence says that anyone who spreads false rumours will have to face serious consequences. 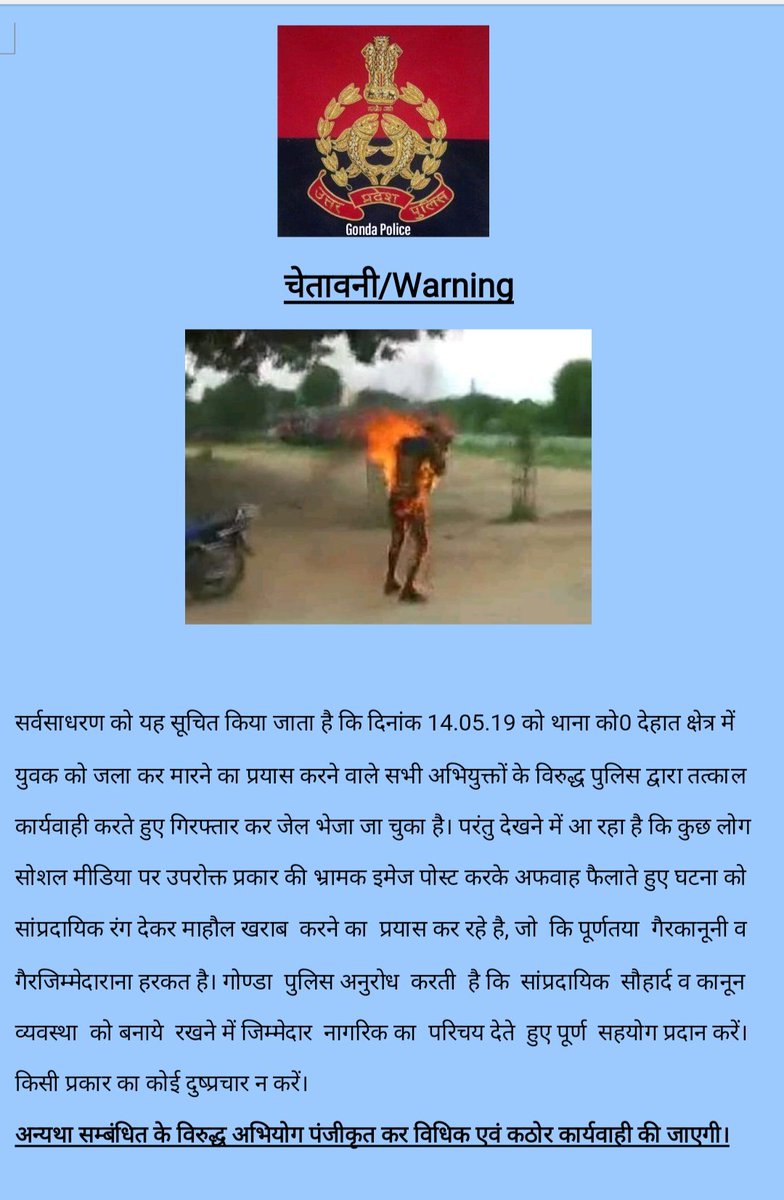 We also conducted a reverse image search and found that the graphic image of a person burning is a screenshot from a Youtube video dated back to March 25, 2013. No context has been provided to the video but it can be concluded that the image used in the viral tweet is not from the actual incident reported but from this old video.

The Gonda police have not provided any information about the second and third picture and we couldn't verify their authenticity independently.

A youth from Hindu community Vishnu Kumar Goswami was indeed set on fire in Gonda district of UP by a group of 4 men from the Muslim community. However, Gonda Police has denied any communal angle in the incident.

Several people have used an old image to report this incident on social media.