Fact Check: A section of media spread misinformation about Ramnavmi fair in Ayodhya amid coronavirus outbreak 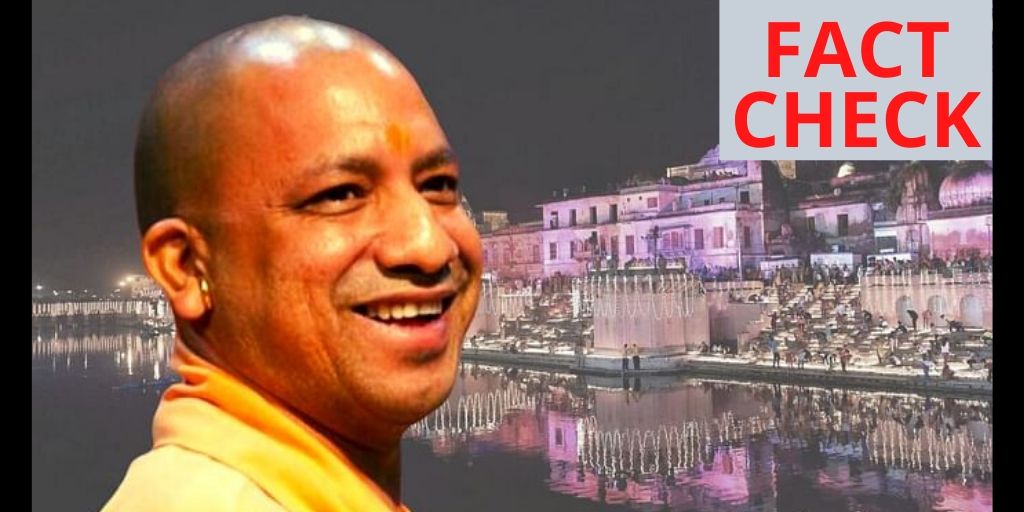 Several media houses prematurely declare that the UP government had given the green signal for Ramnavmi fair.

India is one of the 183 countries that are battling with the outbreak of the novel Covid19. India has till now witnessed  5 deaths and more than 250 confirmed cases of Coronavirus. The central government along with the state governments are issuing advisories and notice for the public to avoid unnecessary travel, public gatherings and to stay at home as much as possible.

Amid all this, the grand Ram Navami Mela was scheduled to be held in Ayodhya from 25th March to 2nd April. Several major media houses published stories with headlines suggesting that the Yogi Adityanath government showed a green signal to Ram Navmi Mela in the Ayodhya, where devotees from nearby states are expected.

The Wire published a story on March 18, titled, "Ram Will Ensure no Harm Comes': Adityanath Govt Okays Mega Fair in Time of Coronavirus." The sub-headline reads, "The Ram Navami Mela or fair will be held from March 25 to April 2 and is likely to attract millions of devotees. " 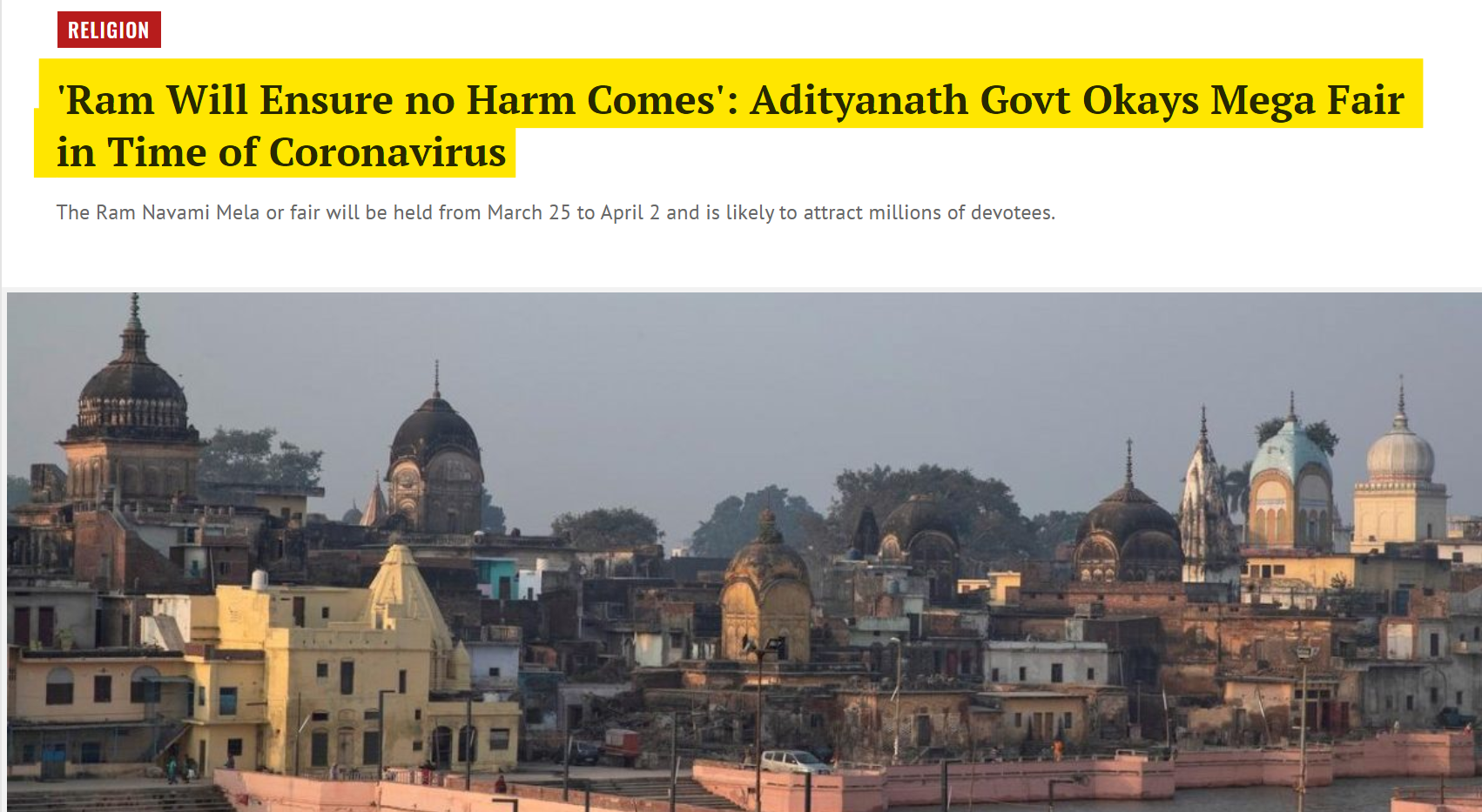 In their article, the media house while targetting UP government has quoted 'unnamed government sources' informing that the government gave a go-ahead to the fair.

The report also claimed that the Adityanath dispensation gave a go-ahead to the fair to avoid a “Hindu backlash.”

Historian Ram Chandra Guha also posted on Twitter and shared an article by Deccan Herald. He wrote, "To go ahead with this Mela now is to trifle with the health of millions of Indians. It must be stopped." 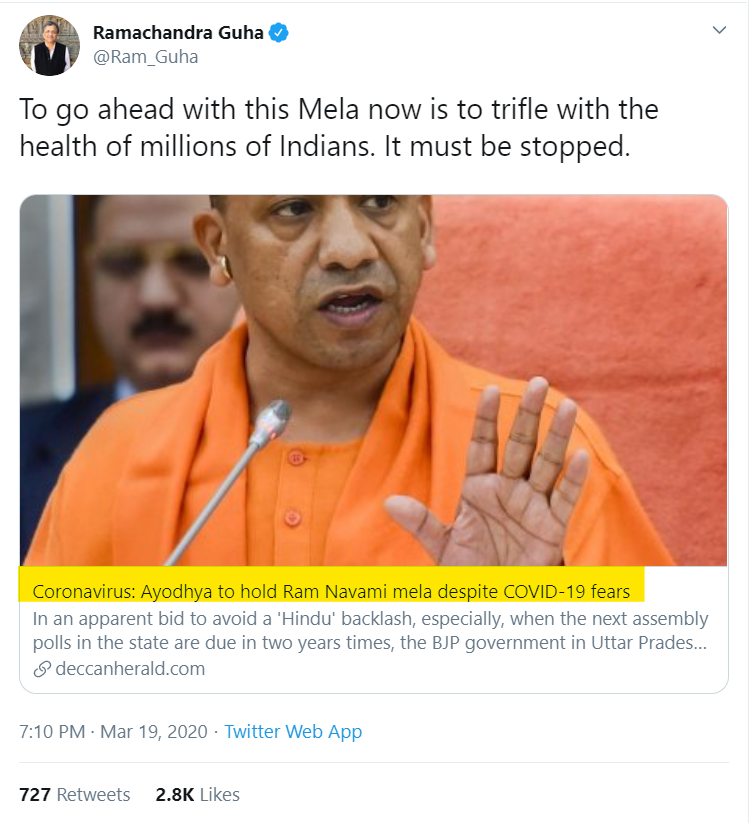 Many other published stories on similar lines including News Laundry, Times of India, and Republic World.

On 16th March, UP CM Yogi Adityanath had said that even though they haven't taken any decision, they will review the situation on 20th March. He said it during ABP News Summit 2020. You can watch the relevant portion from 34 minutes 40th second in the video below:

Apart from the CM's statement, we found a news report by Hindi News daily published on March 18 by Amar Ujala which clearly stated that as Ramnavmi fair might get canceled as the meeting regarding the fair in Ayodhya has been postponed. 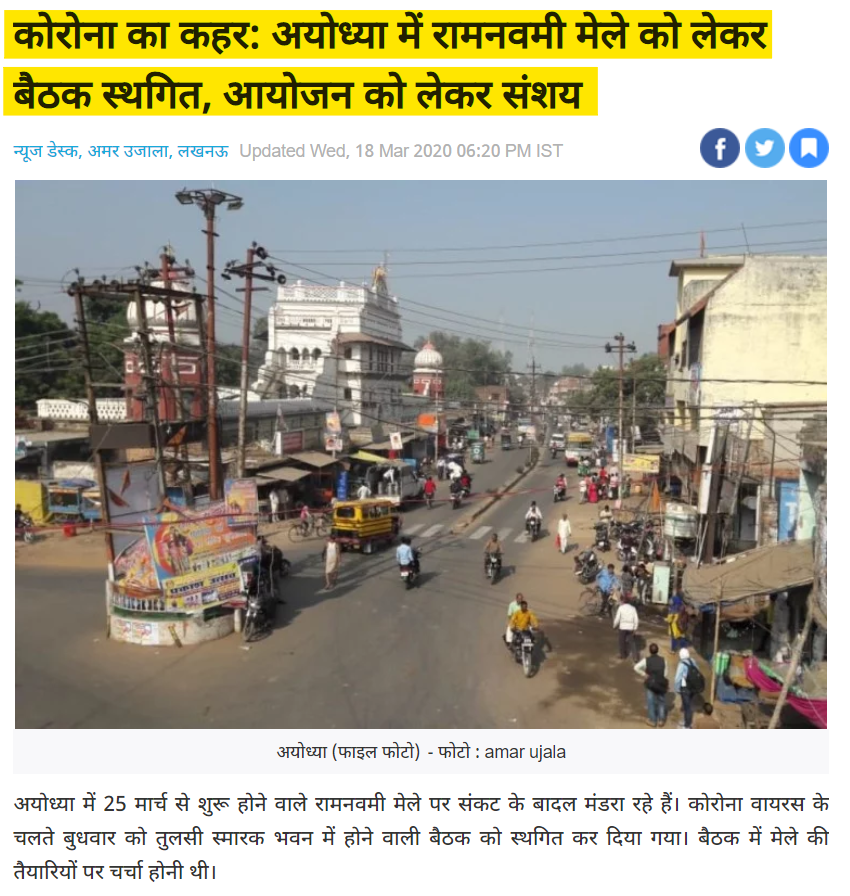 According to the article, the Ram Navami fair was scheduled to begin from March 25 and is now under clouds due to the outbreak of Coronavirus.  A meeting to discuss the Preparations for the fair at the Tulsi memorial building on Wednesday has been postponed.  (Translated from Hindi).

Clearly, the government had not given its go-ahead when the media published these reports.

UP CM appealed to perform religious ceremony at home

We also found a report by the Economics Times published on March 19. The report quoted UP CM saying, "Chaitra Navratri is imminent and many devotees visit temples, especially on the first, second, eighth and ninth day. Fairs are also organized in many areas that see mass participation of people. In light of special circumstances, I appeal to the public to perform any religious ceremony at their homes so that the spread of the infectious virus can be prevented."

The UP govt also clarified they do not organize the fair, and neither do they invite devotees for the same. The govt only provides necessary arrangements which are generally done by govt in such large gatherings. Govt officials told that they are appealing the religious leaders to appeal to people to stay at home.

District Magistrate of Ayodhya, Anuj Jha was also quoted saying, "The government does not organize any fair, neither does it invite people to any such fair- it only makes necessary supplementary arrangements for lakhs of devotees that turn up to Ayodhya on Ram Navami. We are seeking the help of religious leaders in appealing to the public about staying at home and celebrating."

Jha also added, "since April 2 is still two weeks away, any advisory regarding any fair, if needs to be issued, will be issued in due course of time. Meanwhile, the transfer of the idol of Ram Lalla to the platform inside the Ram Janam Bhoomi campus will take place as planned on March 25 and will witness the CM himself performing the puja."

A VHP has confirmed to OpIndia that grand Ram Navami Mela, scheduled to be held in Ayodhya from 25th March to 2nd April, has been canceled but a formal announcement was yet to be made.

According to a report by News 18 dated 19th March, UP govt has canceled the fair.

Clearly,  if we go by these pieces of information, there are indications that Ramnavmi Mela is canceled. And by no means, these reports suggest that the Ramnavmi fair will be held as per it was planned before Coronavirus outbreak.

Now if we look at the title used in the Wire's report, "Ram Will Ensure no Harm Comes': Adityanath Govt Okays Mega Fair in Time of Coronavirus," it appears that the publication used this headline in a derogatory way, in an attempt to target one particular community. They picked one statement made by a saint and used it along with the name of Uttar Pradesh's CM to make it look like that he made the statement. 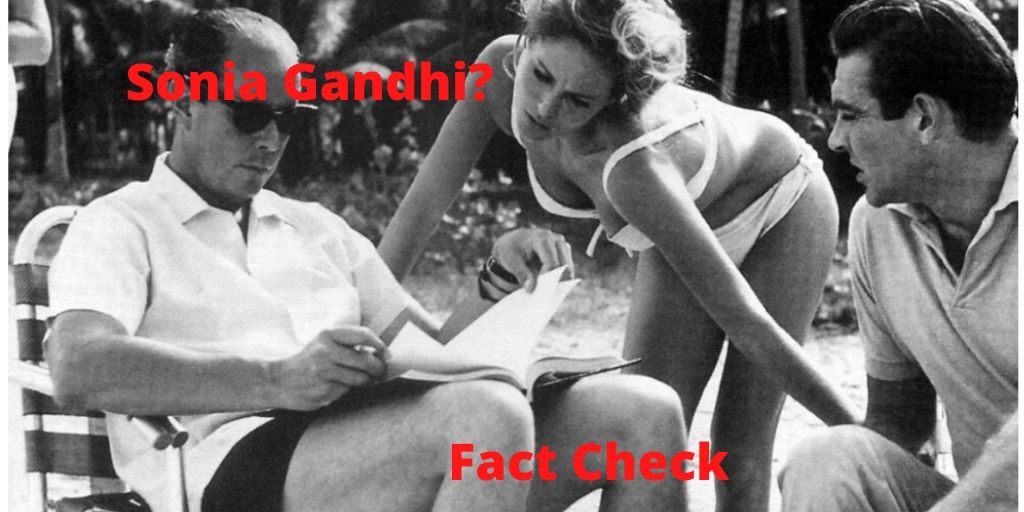