Recently, a verified twitter user named Preeti Chobey posted names of 13 people claiming that they were spying on India for Pakistan. While sharing 13 Hindu names, Preeti sarcastically wrote that 'these are the staunch Muslim men who were arrested by police for spying.' 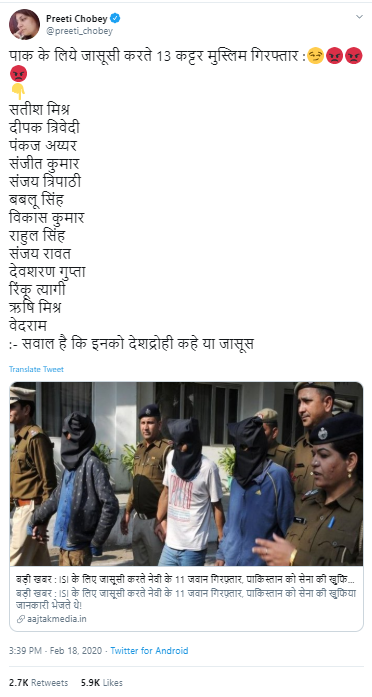 At the time of writing this article, this tweet has been reshared more than 2700 times.

In her tweet, Preeti also shared an article by a website named Aajtak Media. This is a new website as it has only a few articles and some random blogs, out of which the first one was published on 16th February 2020. According to the report, 13 people including 11 Navy officers have been arrested following the allegations of spying on India and leaking sensitive information on social media to enemy spies, after being honey-trapped on social media.

The reported media also quoted the names of six arrested Navy officers and claimed that they were released by India Today. 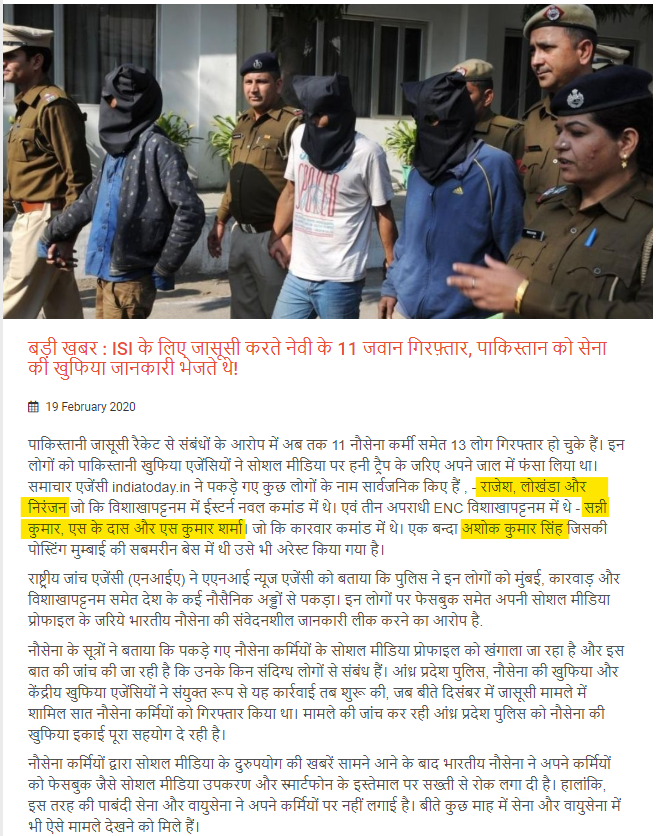 On the 16th of February, it was reported that "as many as 13 Navy personnel including two civilians have been apprehended in connection with an alleged espionage case where Pakistani intelligence operatives virtually honey-trapped them on social media."

On the 4th of January, India Today in its report released names of the 11 accused navy officials.

According to a Times of India report, two arrested civilians are- Sayyed alias Masoom Ali, a hawala operator from Mumbai and Sheikh Shahista, a 47-year-old woman who was reportedly the key conduit in routing the money to accused through a hawala channel.

Hence, the claim that all the 13 accused in the espionage case are Hindu is not completely true. Clearly, 11 naval personnel are from the Hindu community and two civilians belong to the Muslim community.

However, it is noteworthy none of the names released by media matches the names Preeti Chobey, an ex-journalist (according to her twitter bio) has shared in her post. Clearly, the names used by her are made up to misinform people on communal lines.

The image used in the Aajtak Media article is unrelated as it was originally used in an article by the Hindustan Times in 2017 when three men were arrested for gang-raping and murdering a minor girl in Gurgaon. 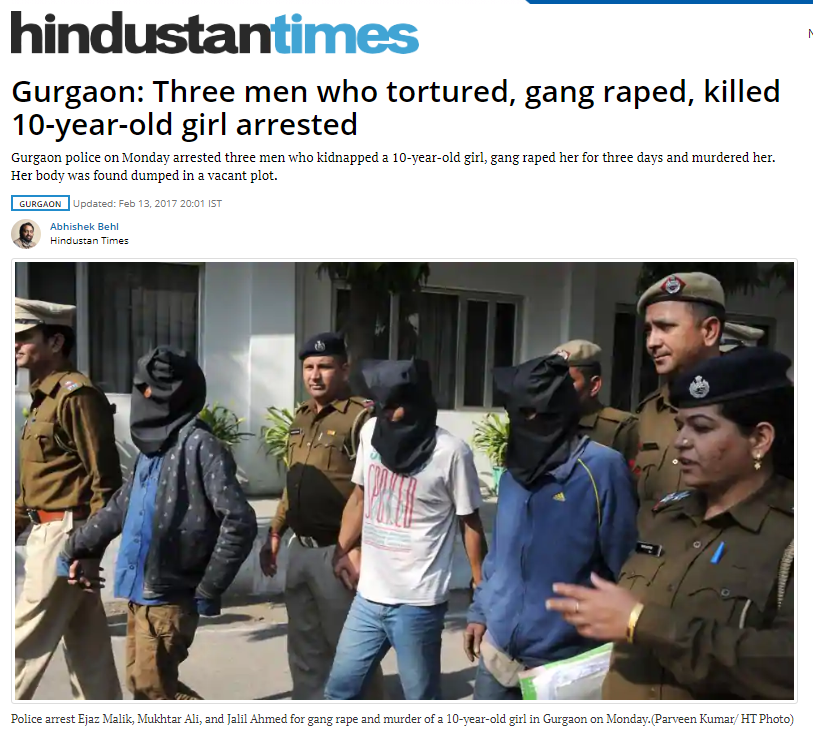 Previously, we had prematurely declared that the names mentioned in the website AajTak Media were made up. We regret the error. We thank our friend at Altnews to point this out.

In its report, Altnews has alleged that Shashank Singh, one of our co-founders intentionally floated a dubious list of names in order to propagate disinformation. However, they failed to mention the follow-up tweet in which he clearly mentioned that the names are fake. 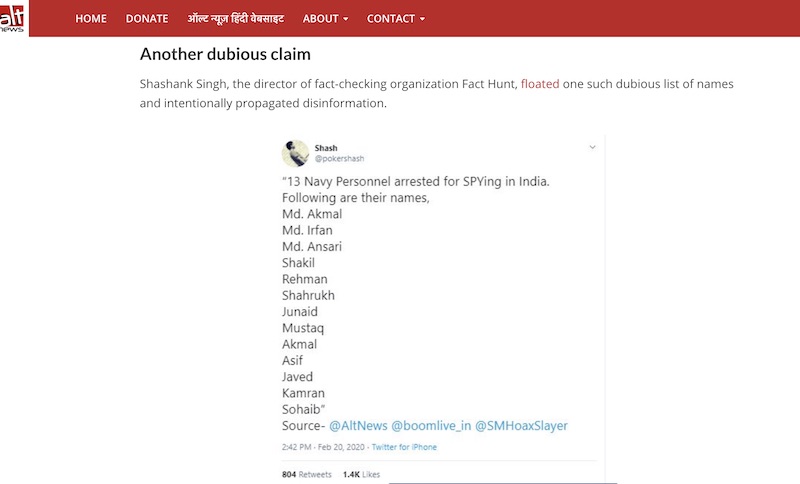 Here is Shashank's follow up tweet in which he alleged that Altnews and other fact-checkers favours a particular ideology thus blacking out misinformation against a particular religion. 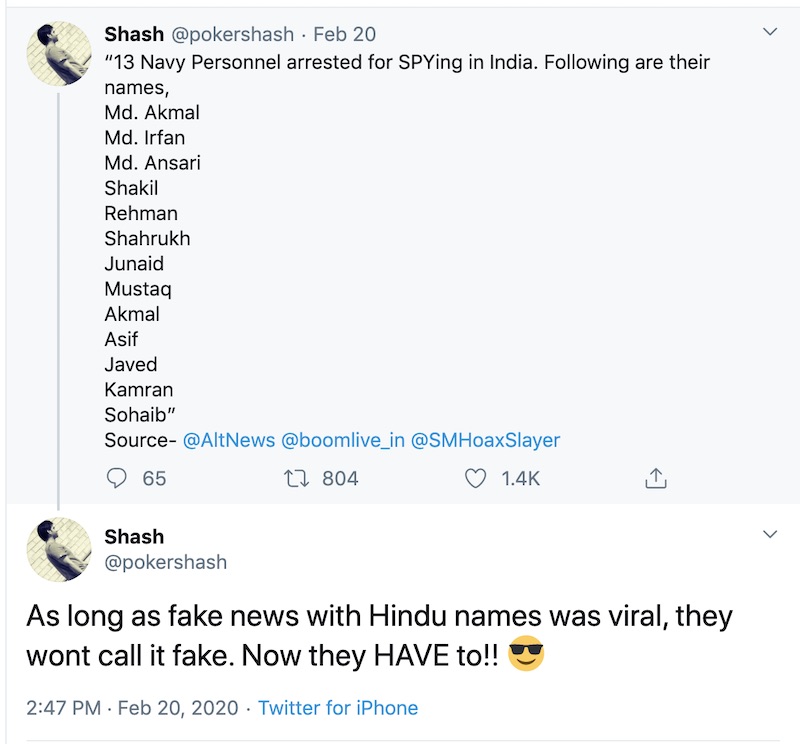 Shashank's claim is somewhat true because Altnews has long been selectively using police statement to call out misinformation against minorities but avoids it when police statement favors majority community in India.

In the aftermath of last year's Lok Sabha election, we had debunked several fake hate crimes in the name of "Jai Shree Ram" and "Bharat Mata Ki Jai" using police statement and their findings.

You can read our detailed report :

However, hardly any of these cases were covered by Altnews and other fact-checkers. But whenever the police statement favors the minority community, they rush to publish articles calling out misinformation. For example, In Aligarh's murder case of a child, Altnews had selectively used police statements to rule out rape. However, the police had clearly mentioned that they are not ruling out the chances of rape.