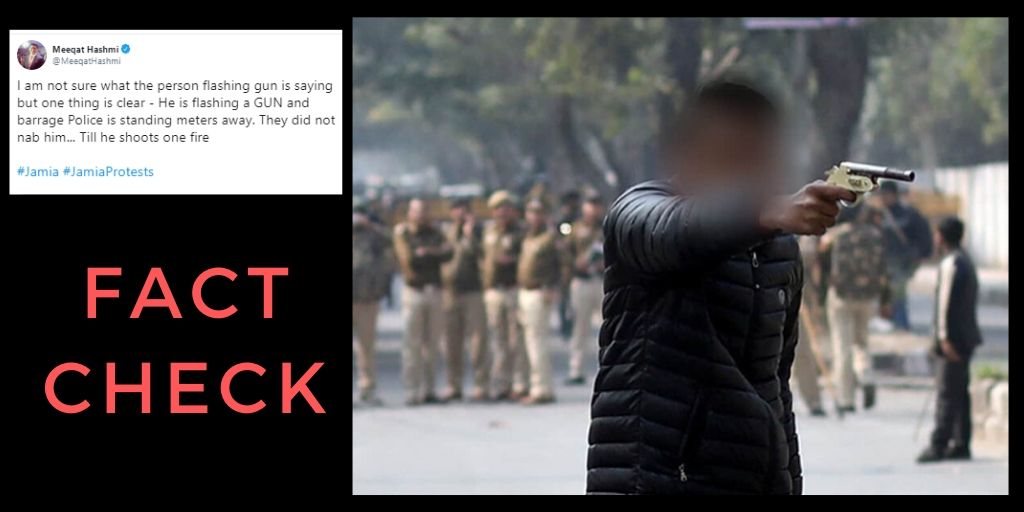 The police followed the necessary protocol. It is wrong to say that the Delhi police stood by and watched the man, Gopal, brandishing a gun,  and opening fire at protesters.

After a month-long protest against CAA and NRC in the capital city, protesters including students of Jamia Millia Islamia were marching towards Rajghat on 30th January. In the meanwhile, a 19-year-old boy named Gopal, dressed in a black jacket and brandishing a gun opened fire at protesters near Jamia Millia Islamia university in Delhi.  A protester was injured in the attack where Gopal was allegedly said, "Who wants freedom? I will give you freedom."

As soon as the video of the video came in the public's eye, it took social media by storm. Some of the Netizens pointed out the inactive police in screenshots of the video and expressed their outrage over it.

A number of Twitter users claimed that the Delhi police stood by and watched the man brandishing a gun, opened fire at protesters near Jamia Millia Islamia University.

A verified Twitter user named Meqat Hashmi shared the video with a caption, " I am not sure what the person flashing gun is saying but one thing is clear - He is flashing a GUN and barrage Police is standing meters away. They did not nab him... Till he shoots one fire" 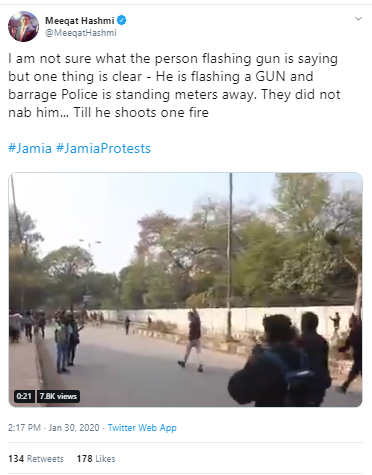 At the time of writing this article, the tweet was shared more than 130 times.

India Today's journalist Rahul Kanwal tweeted a picture which shows policemen standing at the back while the shooter was holding a pistol in his hand. 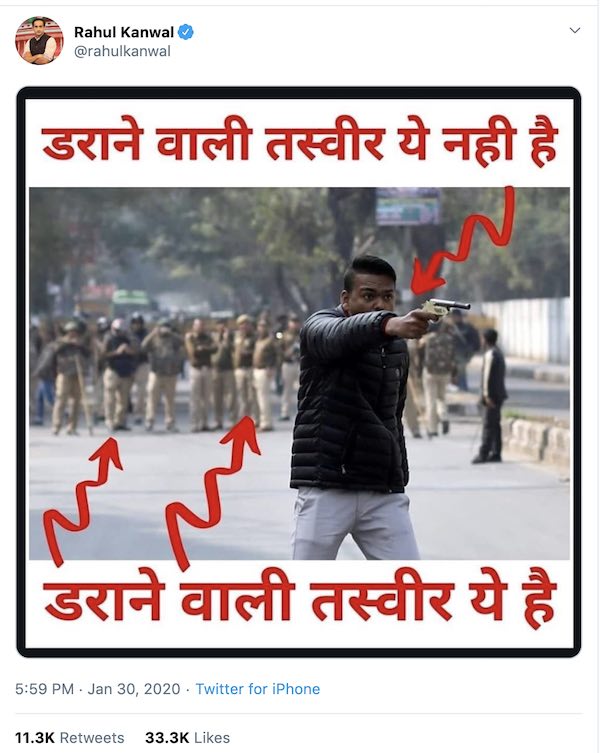 The claim turned out to be false. A number of the video shows the Delhi Police did apprehend the man after they were made aware that he was carrying a weapon.

In the following video, the police were standing at the back and the man with a pistol in hand was walking backward (thus blocking policemen's view). Some people from the background can be seen pointing out to the police that he is holding a pistol in his hand. As soon as police realized it,  few policemen walked up from behind and caught hold of him. In the meantime, he was able to open fire.

As there were hundreds of people, it should be noted that there are protocols in place when dealing with an active shooter, to ensure the situation doesn't get out of hand, and the shooter does not get agitated.

The picture tweeted by Rahul Kanwal was taken in the first few seconds in the above video when police were not aware that he is holding a gun.

The Police officers are trained on how to respond to an active shooter, a procedure known as Rapid Deployment. According to which, they are supposed to proceed immediately to the area in which shots were last heard; their purpose is to stop the shooting as quickly as possible. The first responding officers will normally be in teams of four (4); they may be dressed in regular patrol uniforms, or they may be wearing external bulletproof vests, Kevlar helmets, and other tactical equipment. The officers may be armed with rifles, shotguns, or handguns, and might also be using pepper spray or tear gas to control the situation.

There's nothing safe about a single officer running to confront a potential murderer or a terrorist. A terrorist is defined as a person who uses unlawful violence and intimidation, especially against civilians, in the pursuit of political aims.

Hence, it can be concluded that the police followed the necessary protocol. It is wrong to say that the Delhi police stood by and watched the man, Gopal, brandishing a gun, and opening fire at protesters.

Update: One of our readers sent us a paper clip of Times of India in which the accused was holding the gun and policemen can be seen in the background. 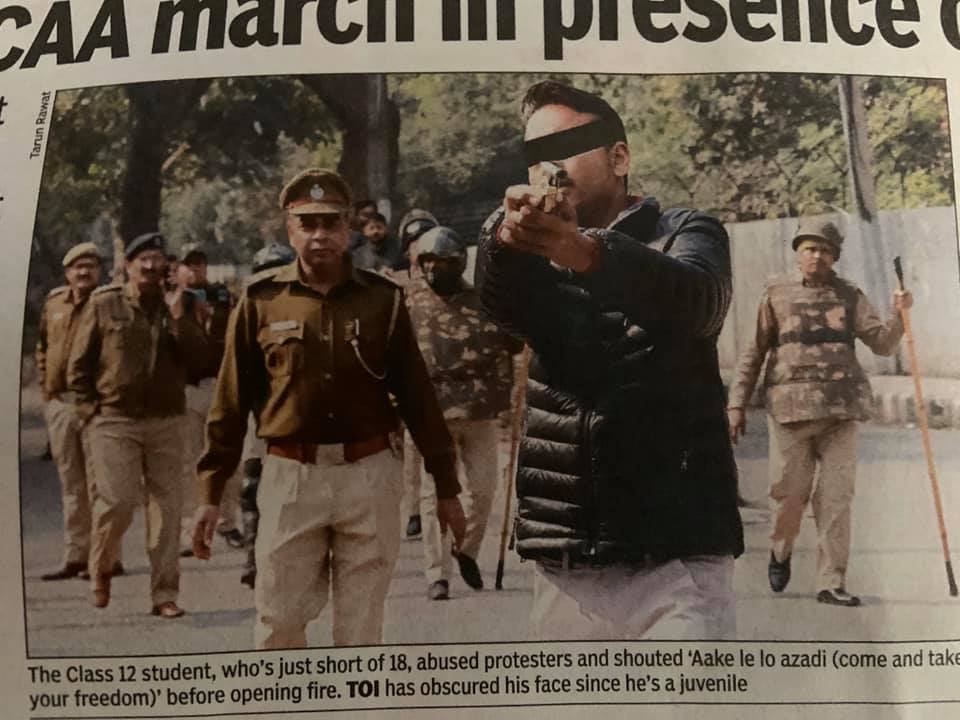 We can confirm that the picture was taken just before the policemen nabbed the gunman. In the picture, the policeman actually is moving towards him quietly to snatch the gun. 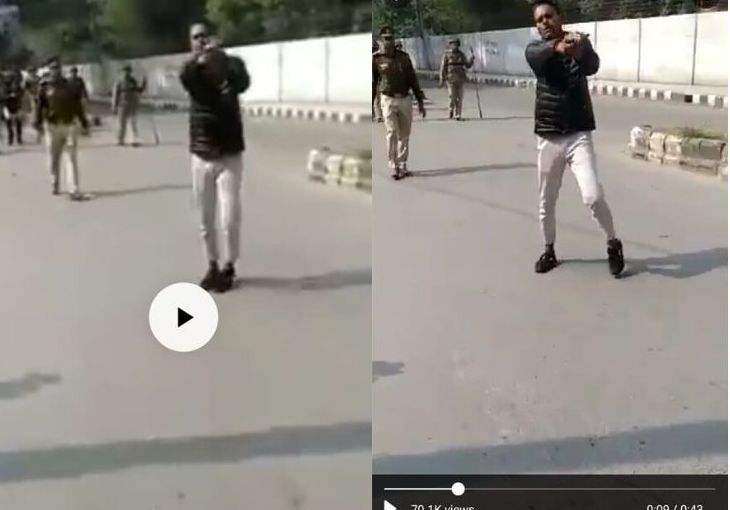 Screenshot from the video

The picture published by Times of India was clicked around 8th second in the video from a different angle.