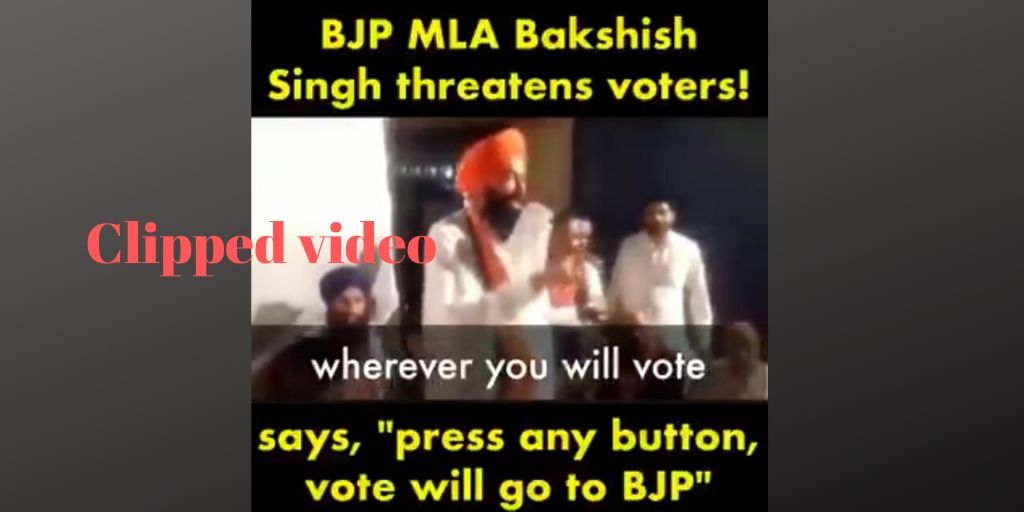 The viral claim is false that BJP MLA from Haryana Bakhsh Singh Virk admitted that the EVMs are tampered in such a way that whatever button you press, the vote will go to the BJP.

Congress MP Rahul Gandhi tweeted a video of BJP candidate from Haryana’s Assandh constituency, Bakshish Singh Virk with a caption "The most honest man in the BJP".

The video that Rahul Gandhi has shared is of 39 seconds, in which Baksheesh Singh can be seen addressing Punjabi in a general meeting. He can be heard saying, "Wherever you vote, we will get to know that which person has voted for whom. Do not think that we will not know. We deliberately don't tell you. But if we want we can find who will you vote. Because Modi Ji and Manohar Lal Ji are very intelligent. Whichever button you press, the votes will automatically go to flower (BJP’s election symbol)". 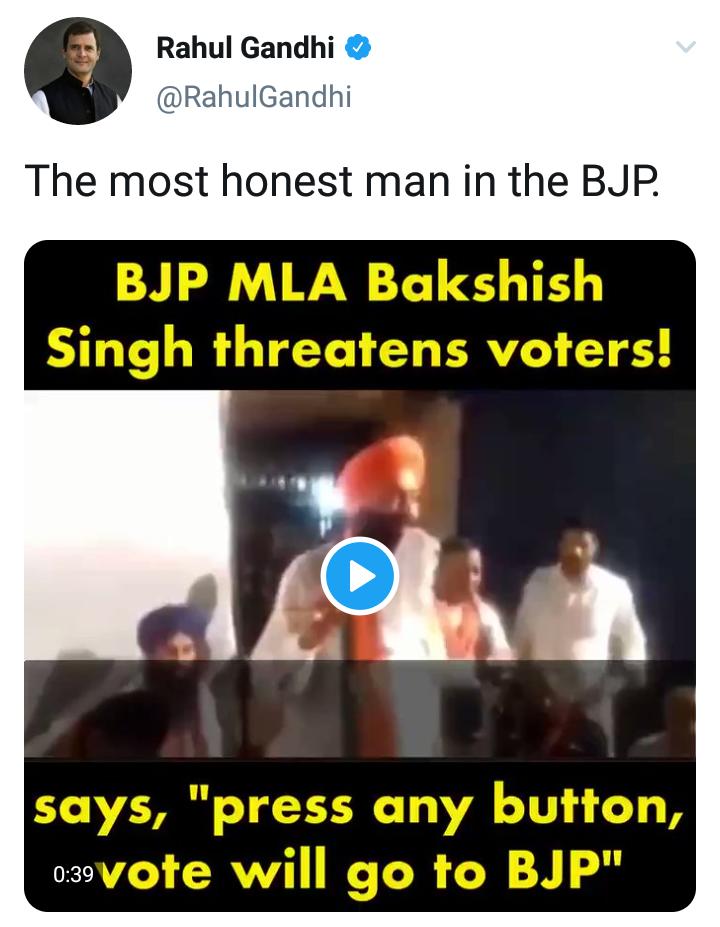 The post received 45,632 likes and 13,881 retweets at the time of writing this article. You can watch the video shared by Rahul Gandhi here:

In the investigation, we found that the video clip that Rahul Gandhi has shared has been edited in such a way that the meaning of what Virk said has changed.

What Virk says while addressing in Punjabi will translate to, "You know what they are saying now?" They are saying that no matter where you vote, it will go to the flower (BJP) only. Whatever button you press, the vote will go to the BJP. A device has been fitted in the EVM".

You can watch his original video here:

The first sentence, where he refers to the opposition, was clipped. He says that the opposition thinks that the BJP has fixed such devices in voting machines that all votes are recorded in the party’s name. Here, he is talking about opposition claims of rigging EVMs.

The original clip was also broadcasted by STV Haryana News.

However, it is worth mentioning that Virk had actually said that we will come to know whoever you vote for because Modiji’s and Manoharlalji’s eyes are also very sharp.

According to a news report, after the controversial remarks about EVMs emerged on social media on the eve of Haryana Assembly polls, following which the Election Commission issued Virk a show-cause notice and appointed a special observer to the constituency to take "corrective action". However, Virk claimed that he never said anything about EVMs. He said,

"A fake video has been made viral. Some media person has done this act and twisted the entire thing. I respect the Election Commission and have faith in EVMs. I never said anything about the voting machines".

Now it is up to the Election Commission to decide whether Virk's statement will fall under the category of unfairly influencing voters or whether it is a violation of the Model Code of Conduct.

In conclusion, the viral claim is false that BJP MLA from Haryana Bakhsh Singh Virk said that the EVMs have tampered. The meaning of Virk's statement has been changed by editing the video.