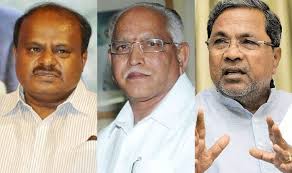 The BJP has emerged as the single largest party in Karnataka election but fell eight seats short of a majority. The Congress having 78 seats has extended unconditional support to third-placed rival JD(S) with 37 seats for a post-poll alliance to keep BJP out of power. All eyes are now on Governor Vajubhai Vala who will have to decide whether to call BJP to form the government or JD(S)-Congress combine, which together have the majority in the 224-member Assembly.

The BJP and Janata Dal Secular-Congress’ post-election alliance have both staked claim. Now the question is who should be given the chance to form the government?

The Sarkaria Commission was set up by the central government in 1983 to review Centre-state relations and examine and suggest changes within the framework of the Constitution of India, expressly recommends inviting the single largest party first to avoid any controversy. “This has been upheld by the Supreme Court in 2005.

As per Sarkaria Commission order of preference the governor should follow in case of hung assembly:

As per Punchi Commission order of preference the governor should follow in case of hung assembly:

“He or she (the governor) has to invite the leader of a party or an alliance who in his or her opinion is likely to command the confidence of the House.” - Sanjay Hedge, senior Supreme Court lawyer

“If the BJP were to be invited and manages to break the JD(S), it has to steer clear of falling foul of the anti-defection law. Whatever decision the Governor takes, whether calling the single largest party or another alliance, he mustn’t take any unnecessarily step that could encourage or precipitate horse trading,” said GC Malhotra, a former secretary-general of the Lok Sabha.

“It is up to the understanding of the governor whom he calls to form the government. It is up to him if he wants to call the single-largest party or a coalition government” -  Subhash Kashyap (Constitutional expert)

Why Governors didn't give chanve to congress in Goa, Manipur and Meghalaya when they were single largest party?

The Supreme Court dismissed the Congress’s petition challenging GOA's governor's decision to invite BJP to form the gvernment by stating that:

However in Karnataka BJP being the single largest party has already made their claim to form the government, it will be logical enough to give them the first chance.