Fact Check: Do Kashmiri women lose her right over ancestral properties if she marries a non-Kashmiri 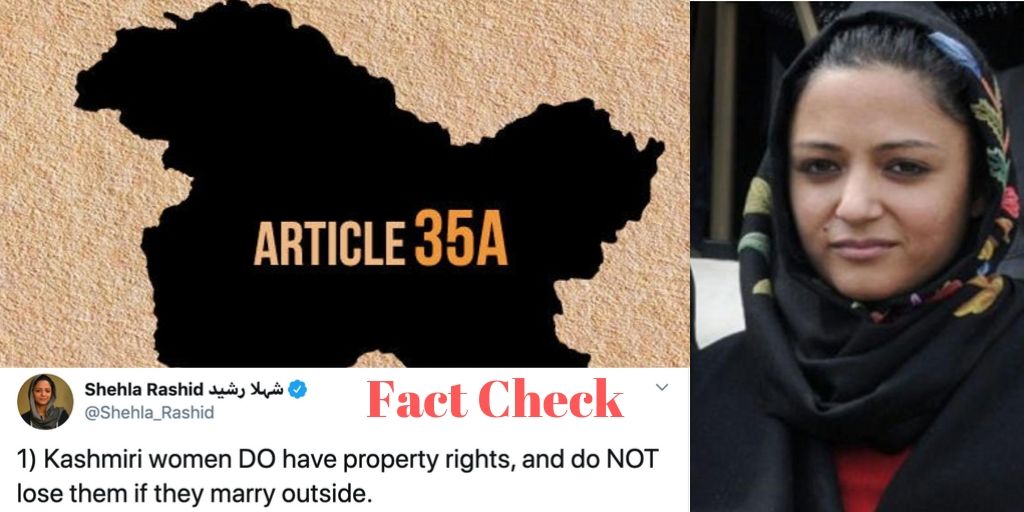 Do Kashmiri women lose their right over ancestral properties if they marry a non-state subject? This post debunks the widely held belief about Kashmiri Women.

1) Kashmiri women DO have property rights, and do NOT lose them if they marry outside.

2) The Supreme Court recently decriminalised homosexuality in all of India. No credit to her homophobic friends in the RSS-BJP. Their govt OPPOSED legalization on record in the Supreme Court. 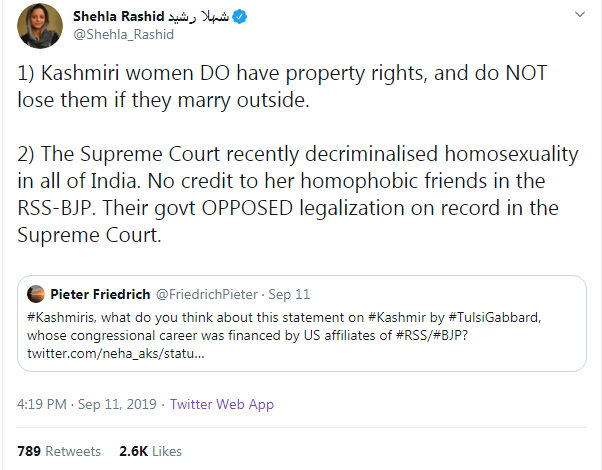 Shehla Rashid Shora, a native of Jammu and Kashmir is a leader of (JKPM) Jammu and Kashmir People’s Movement.  The activist had been vice president of Jawaharlal Nehru University for 2015-16. She has also written for The Indian Express. Currently, she is pursuing her Ph.D. at Jawaharlal University. Shehla Rashid has over 6,35,400 followers on Twitter and the above tweet of her has seen 791 retweets and 2,600 likes.

So, what is a matter of concern?

Precisely, the matter of concern is point one: Kashmiri women Do have property rights and do NOT lose them if they marry outside. (We are not verifying point two for now)

A twitter user countered (point one) of Shehla: “Madam, Jammu and Kashmir women under 35-A Article use to lose the property if they do marry men from rest of the country”.

To this, her reply was: “No, they don’t. Please do proper research. Your government has lied to you. Just as they lied to Amarnath yatris about a non-existent terrorist threat. And you bought both these lies because you blindly trust Modi.”

Another Twitter handle Saburi Pandit countering the point tweeted in reply; “What are you even saying? Every woman resident of J and K loses property rights on marrying anyone outside the state. Please get yourself educated! I'm a KP born and brought up in Jammu. How can you simply lie like that?”

“They don’t. Please do proper research”, was the reply from Shehla Rashid.

It is often quoted and majoritarian view that a Kashmiri woman loses her right over the ancestral property if she marries a non-resident of Jammu and Kashmir. Various media reports have often reiterated this status in J&K, which is provided by Article 35A. The Hindu and India Today has shown allegiance to the belief also have endorsed this view in their articles.

What is government view on the matter?

An Indian Express report published on August 13 this year, after the Jammu and Kashmir reorganisation Bill was passed from both the houses of Parliament, reported Union Minister of States for Shipping Mansukh Laxmanbhai Mandaviya, saying in a press conference  “… If a girl (permanent resident) of Jammu and Kashmir married a boy from any other part of the country, who is not a permanent resident of J&K, that girl and her children would be deprived of the property rights…”.

So, what is correct about a Kashmiri woman marrying an outsider and property rights? What we found.

We found an Indian Express article headlined "Explained: Do J&K woman lose their right to share in the ancestral property if they marry a non-state subject? " published on 3rd December 2013 from the archives. The article brings out that ‘a J&K woman doesn’t lose her share of the ancestral property completely if she marries to a non-state subject.’ in answer to the question.

The judgment of the High Court Could be read here.

The article further explains NC (Nationalist Conference) government led by Farooq Abdullah under whose rule the verdict had moved Supreme Court, and filed an SLP (SLP) Special Leave Petition in the Apex Court.

However, the successive coalition government of PDP (People’s Democratic Party) and Congress, withdrew the petition. Furthermore, the coalition government moved a resolution Jammu and Kashmir Permanent Resident Status (disqualification) Bill 2004 in an attempt to nullify the High Court Verdict. But rising differences between coalition partners stalled the bill in Legislative Council. Then another attempt to nullify the bill was made in 2010, this time too, it failed to get the support of the house.

Apart from the Indian Express, other media portals like Outlook.com, firstpost.com in their articles have reiterated the present status on Kashmiri women losing property upon marriage with the non-state subject.

However though a Kashmiri woman (permanent citizen) doesn’t lose her right over ancestral properties after marriage with a non-state subject, the property is not inherited by children of such a couple.

The Jammu and Kashmir High Court in its judgment in its written judgement had observed that Children of such couple acquire the status of father (who is a non-state subject) and not mother. The court didn’t decide whether the children and husband should be considered a state subject or not. The High Court has called for larger bench to hear the matter in the determination of whether the husband of a permanent resident could be called a state subject or not.

Since the kids can't acquire the property from the mother, Kashmiri women are bound to lose the property after her death. Though it is not clear whether the state acquires such property.

So, Kashmiri women have virtually left with no other option apart from selling the property to Kashmiri and settle in other parts of the country if she wants to pass on her property to kids and grand-kids. If she doesn't sell her property, she is bound to lose it.

Either way, Kashmiri women are the losers if they decide to marry someone from outside of Kashmir.

So, Shehla's tweet (point one) is technically correct but it doesn't show a complete picture. In pure technical term, women don't lose the right of the property but she loses the right to pass on the property to her kids,

Notably, once the Jammu and Kashmir reorganization bill comes into effect from October 31, Kashmiri women will not face this discrimination if they marry someone from outside of Kashmir.

The constitution of India under Article 136 vests the Supreme Court of India with a special power to grant special leave to appeal against any judgment or order or decree in any matter or cause passed or made by any Court/tribunal in the territory of India.

Special Leave Petition holds a prime place in the Indian Judicial System. It provides the aggrieved party special permission to be heard in Apex Court in an appeal against any judgment or order of any court.

The SLP can be filed against any judgment of the High Court within 90 days from the date of judgment.

Or SLP can be filed within 60 days against the order of the High Court refusing to grant the certificate of fitness for appeal to Supreme Court. (Law senate).

Hence the widely held belief that a Kashmiri woman after marrying a non-state subject loses her right over ancestral property is not 100% right but it is not 100% wrong either. So, Shehla's tweet (point one) is technically correct but it doesn't show a complete picture.