Pingali Venkayya or Surayya Tayyabji - Who designed our national flag? 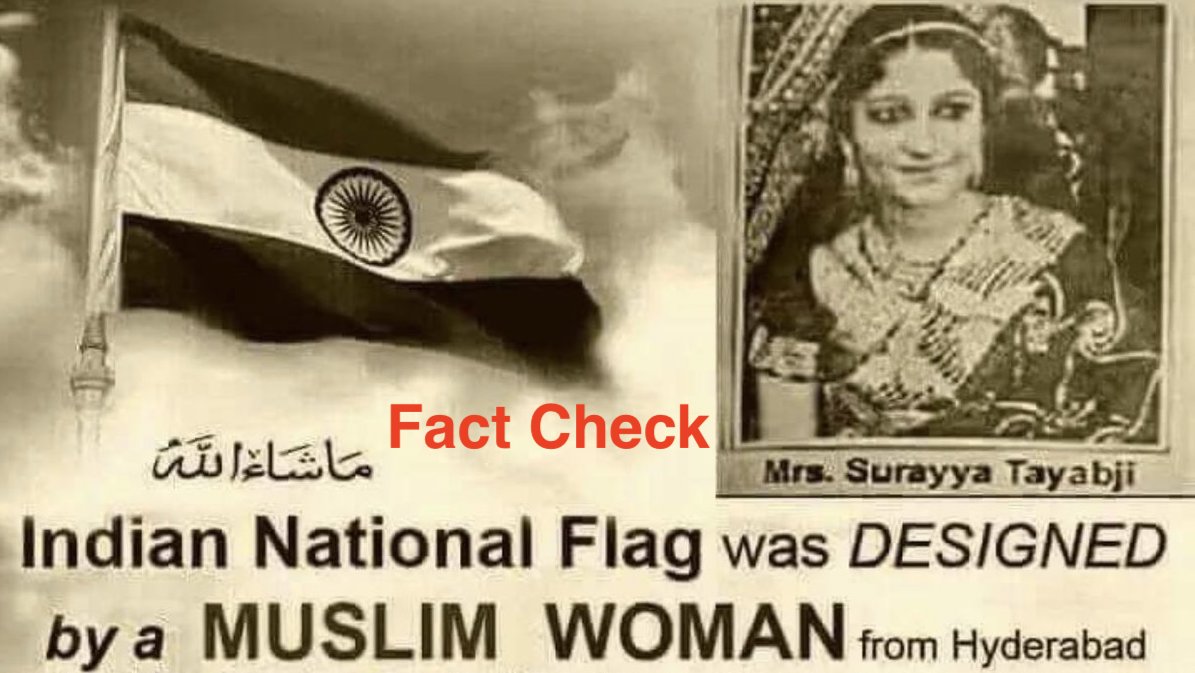 The flag with spinning wheel was originally designed by Pingali Venkayya and the removal of spinning wheel and its suitable replacement with Ashoka Chakra was taken care of by Surayya Badr-ud-Din-Tyabji.

On 15th of August, noted journalist Arfa Khanum Sherwani, who hosts the show ‘Arfa ka India’ on the online news portal ‘The wire’ tweeted: “For the Azadi that we all fought for. (Our national flag was designed by Surayya Tayyabji) #IndependenceDayIndia.” The tweet is retweeted 85 times. 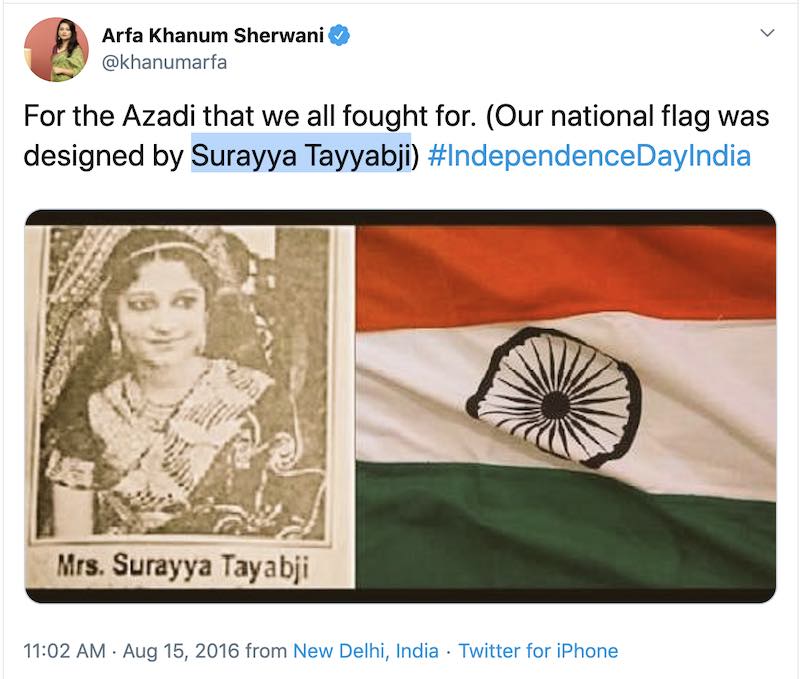 The tweet of Arfa re-instigated the controversy around the designer of the Indian National Flag.

Although Pingali Venkayya was commorated in 2009 for his design of the national flag. There is controversy amiss among the masses over who is the designer of the Indian national flag.

The tricolor is a symbol of national pride for every Indian. It signifies India’s long struggle for freedom. The tricolor in its present form was adopted on July 22, 1947, by the Constituent Assembly. Our tricolor has three colors namely, saffron at the top, white in the middle and green at the bottom, divided equally in the ratio of 2:3. The Ashok Chakra in navy-blue color having 24 spokes occupies the center in white.

The controversy around the designer of the Indian national flag was instigated by Capt. L Panduranga Reddy, a historian, who first proposed that not Pingali Venkayya but Surayya Tayyabji is designer of Indian National flag.

The claim (that Surayya Badr-ud-Din Tyabji is the designer of our national flag) has been substantiated for in reference to a book ‘The Last Days of Raj’ written by English Historian Trevor Royle, which says and claim that "By one of those contradictions which run through India's history, the national flag was designed by a Muslim, Badr-ud-Din Tyabji The flag which flew on Nehru's car that night had been specially made by Tyabji's wife".

Further According to Capt. L Panduranga Reddy AICC authorised historian on the issue of the national flag, Bhogaraju Pattabhi Seetaramaiah has not made any mention of Pingali Venkaiah’s name, not even once in his book The New Indian Express reports.

So Who is right?

The first ever flag for India was made by Irish Disciple of Swami Vivekananda, in the year 1904, it had two colours red and yellow. Red denoted the freedom struggle and yellow symbolised victory. The flag had Vande Mataram written on it in Bengali. It also had a Vajra ( said to be the weapon of rain God Indra) and a white lotus at the center.

Since then many flags have been designed by various personalities. In the same year(1906) a flag was believed to be designed by Sachindra Prasad and Sukumar Mitra.

In 1916, Pingali Venkaiyya designed a flag with the intention to bring the whole nation together. He reportedly had met Gandhi, who had said to him to incorporate the charka to represent the economic regeneration of India. Pingali Venkayya came up with a flag with charka on a red and green background. However, Gandhi was not happy with it as he believed that the flag did not represent all religions of India.

To address Gandhiji’s concern a new flag was designed. This time the white featured at the top, green in the center and red at the bottom symbolising the minority religions, Muslims and Hindus respectively, with a Charkha drawn across all three bands. Although this flag was not adopted by Congress it was widely used during the freedom movement

The Hindu reports that four years preceding 1919, Pingali Venkaiyaa had been offering various designs of flags for the Indian National Flag.

However, around this time, there were many who were not satisfied with the religious interpretation of the flag. All India Sanskrit Congress convened in Calcutta in 1924 suggested the inclusion of saffron and ‘Gadha’ of Lord Vishnu as the symbol of Hindus. Sikhs too demanded inclusion of yellow color to represent them.

In the wake of these developments, Congress Working Committee appointed a ‘Flag Committee on 02-04-1931 to sort out these issues and passing a resolution that "objection has been taken to the three colors in the flag on the ground that they are conceived on the communal basis."

As a result of this, a flag featuring just one colour, ochre, and a charka at the upper hoist. The INC did not adopt this flag on the ground of communal lines.

Later that year when the congress committee met in Karachi, a resolution was passed saying, The Hindu quotes “The National Flag shall be three-colored, horizontally arranged as before, but the colors shall be saffron, white and green in that order from top to bottom, with the spinning-wheel in dark blue in the center of the white stripe; it being understood that the colors have no communal significance, but that saffron shall represent courage and sacrifice, white peace and truth, and green shall represent faith and chivalry, and the spinning wheel the hope of the masses."

This flag was said to be designed by Pingali Venkayya.

The Indian National Congress officially adopted this flag on 6th August 1931 and hoisted it on August 31, 1931. This day was regarded as Flag day. It had tricolor just like the current national flag but with the charkha at the center.

Ram Chandra Guha in his TRUTHS ABOUT THE TRICOLOUR, for The Hindu says, the next modification in the flag took place on the eve of Independence, a committee of the Constituent Assembly decided that while they would retain the colours and spirit of the tricolour, they needed to make some changes, if only to ensure that the flag of independent India was not identified with the Congress party alone. Finally, it was resolved that the spinning wheel would be replaced by a Asoka Chakra.

However Gandhi was of the opinion that ‘The Congress has been national from its very inception’, he insisted. ‘It has never been sectional. It embraces all sections and all Indians’. Should not ‘the flag under which the Congress has fought so many non-violent battles … now be the flag of the Government of free India?’

Mr. Guha writes that even though Gandhi was not happy about the change he was ultimately persuaded.

On July 22, 1947, the constituent assembly passed a resolution on the National flag where Pandit Jawaharlal Nehru proposed the flag of the Indian National Congress but instead of the Chakhra or spinning wheel, he proposed the Ashoka Chakra of the Lion emblem.

In an article written for The Wire by the daughter of Surayya Badr-ud-Din-Tyabji -- Laila Tyabji writes:

Time was ticking along and everyone in the Committee (Nehru was keenly involved and extremely unhappy with the designs coming in) were getting a bit desperate, when suddenly, my parents had this brainwave of the lions and chakra on top of the Ashoka column. (They both loved the sculpture and ethos of that period). So, my mother drew a graphic version and the printing press at the Viceregal Lodge (now Rashtrapati Niwas) made some impressions and everyone loved it. Of course, the four lions (Lion Capital of Ashoka) have been our emblem ever since.

Meanwhile, without thinking too much about it, everyone had assumed that the Congress tricolour flag designed by Pingali Venkayya, with Gandhiji’s charkha in the middle, would be the national flag. Our independence struggle had been fought under its banner. However, there was opposition to a party flag representing the nation. So, my parents were tasked with re-doing the flag, and they took the same Ashoka chakra and put it on the tricolour. Once it was done, it all seemed so natural and obvious. Originally, my mother had painted a black chakra, but Gandhiji objected so it became navy blue.

The documents of Parliamentary archives shows Suraiya Tyabji's name in the list of members of the Flag Presentation Committee who presented the national flag on Aug 14th, 1947. However, it is nowhere mentioned that it was her design which was passed by the constituent assembly on July 22, 1947.

There is no primary source available to substantiate the claim.

However, according to Flag Foundation of India, an NGO set up by Congress leader and industrialist Naveen Jindal, it was Suraiya Badr-ud-din Tyabji's design of the national flag which was approved by the constituent assembly.

Even if it was her design, it is not clear whether other members of the Flag Committee were involved in the design process or not. Or if they were involved then up to what extent. If if it was entirely her own idea, she can't be called as a designer of the Indian flag. At best one can call her the woman who replaced Spinning Wheel(Charkha) from our national flag and replaced it with Ashoka Chakra.

Hence, the flag with spinning wheel was originally designed by Pingali Venkayya and the removal of spinning wheel and its suitable replacement with Ashoka Chakra was taken care of by Surayya Badr-ud-Din-Tyabji.

An image of Surayya Tyabji is going viral on web with a message that she was the one who designed the Indian flag. 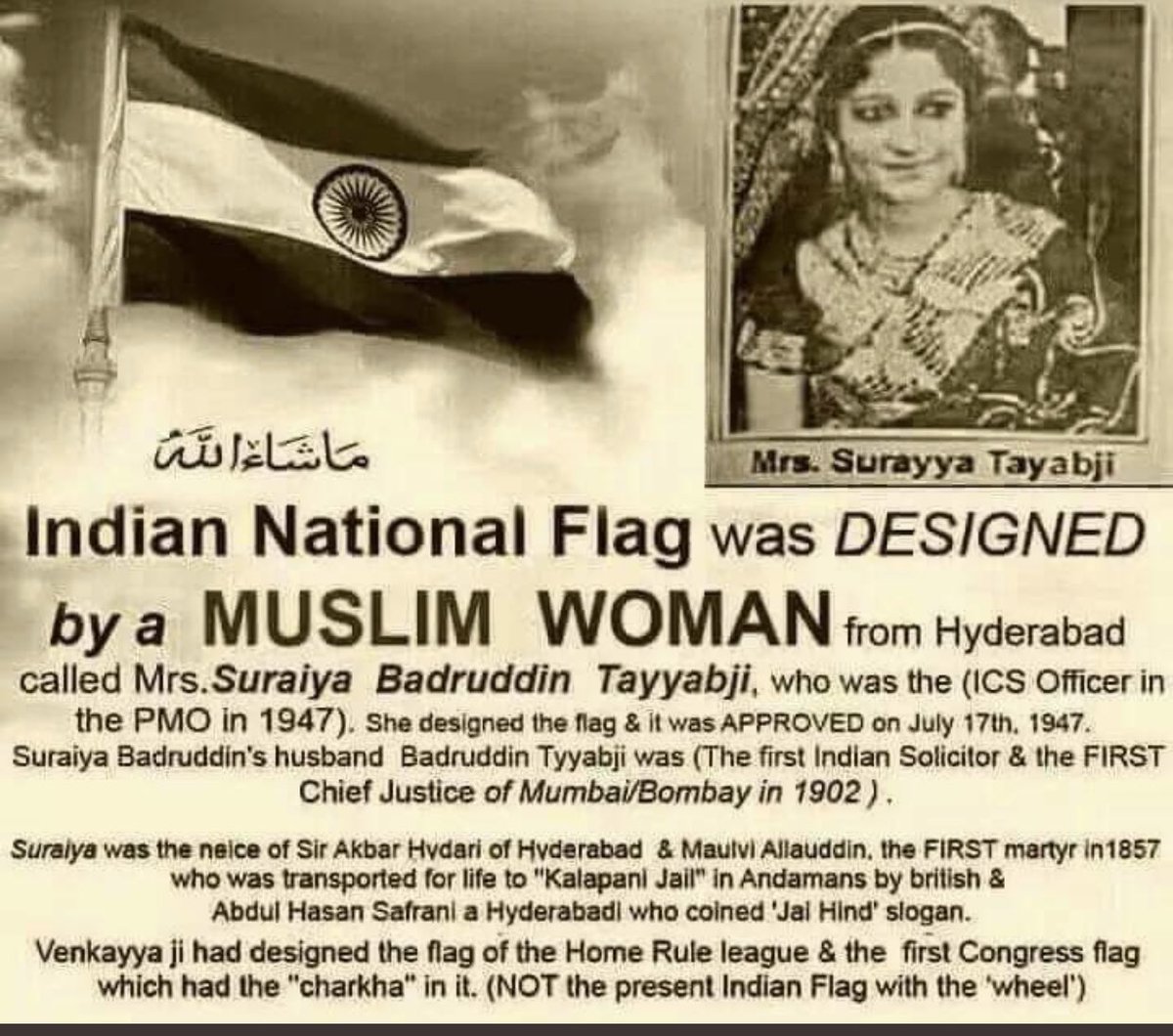 However, the claim of this viral picture is clearly wrong and misleading. Suraiya Tyabji was not an ICS officer in the PMO and neither her husband Badruddin Tyabji was the first chief justice of Bombay high court.

Moreover, she alone can't be credited with the design of our national flag.