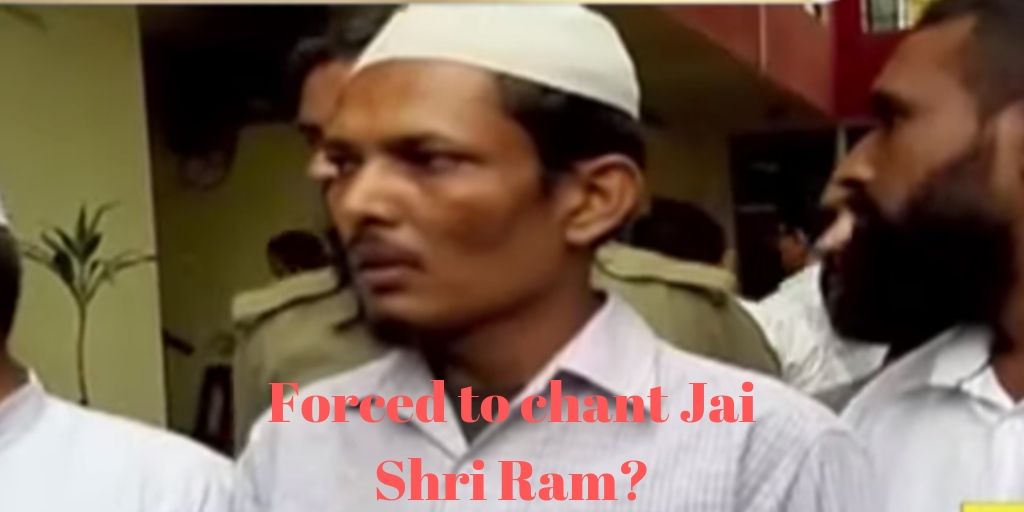 The eye-witnesses who came to the victim's rescue have denied that he was forced to chant ‘Jai Shri Ram’. Instead, they have asserted that the incident was a result of a personal feud.

Last week, a report went viral on Social media that a man was allegedly thrashed by a group of unidentified persons and forced him to chant "Jai Shri Ram" in Aurangabad city of Maharashtra. 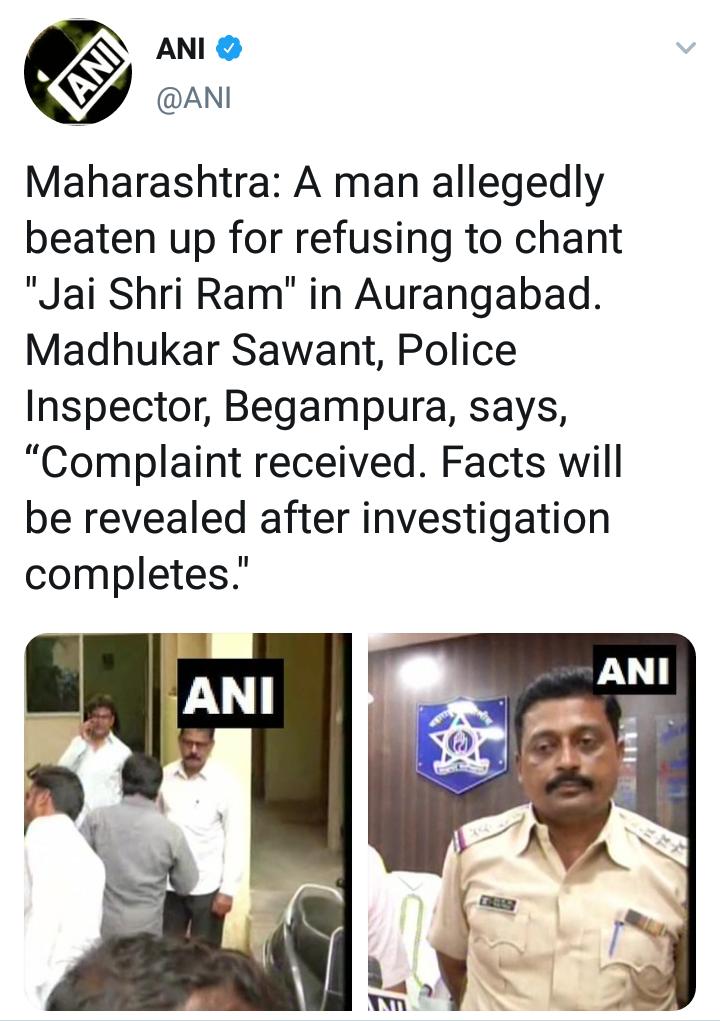 Imran Ismail Patel, a hotel employee, said in his complaint that a gang of around 10 hooligans stopped him near Hudco Corner in Begumpura area when he was returning home on a motorbike. They beat him up and forced him to say "Jai Shri Ram".

Police inspector Madhukar Sawant said the investigation was underway and the complaint was being verified. A case under IPC sections 153-A (promoting enmity between different groups on the ground of religion) and 144 (unlawful assembly) was registered, the police officer added.

According to Imran Ismail Patel, the men thrashed him and forced him to chant 'Jai Shri Ram' thrice. He full filled their demands but they still beat him. On hearing Imran cries, a Hindu couple rushed out of their house to his rescue and saved him. The couple pleaded the attackers not to harm him. They then got his motorbike keys from the assaulters and ensured that he went home safely.

The eye-witnesses who came to Imran’s rescue have put paid to the claims made by Imran that he was forced to chant ‘Jai Shri Ram’. Instead, they have asserted that the incident was a result of a personal feud. 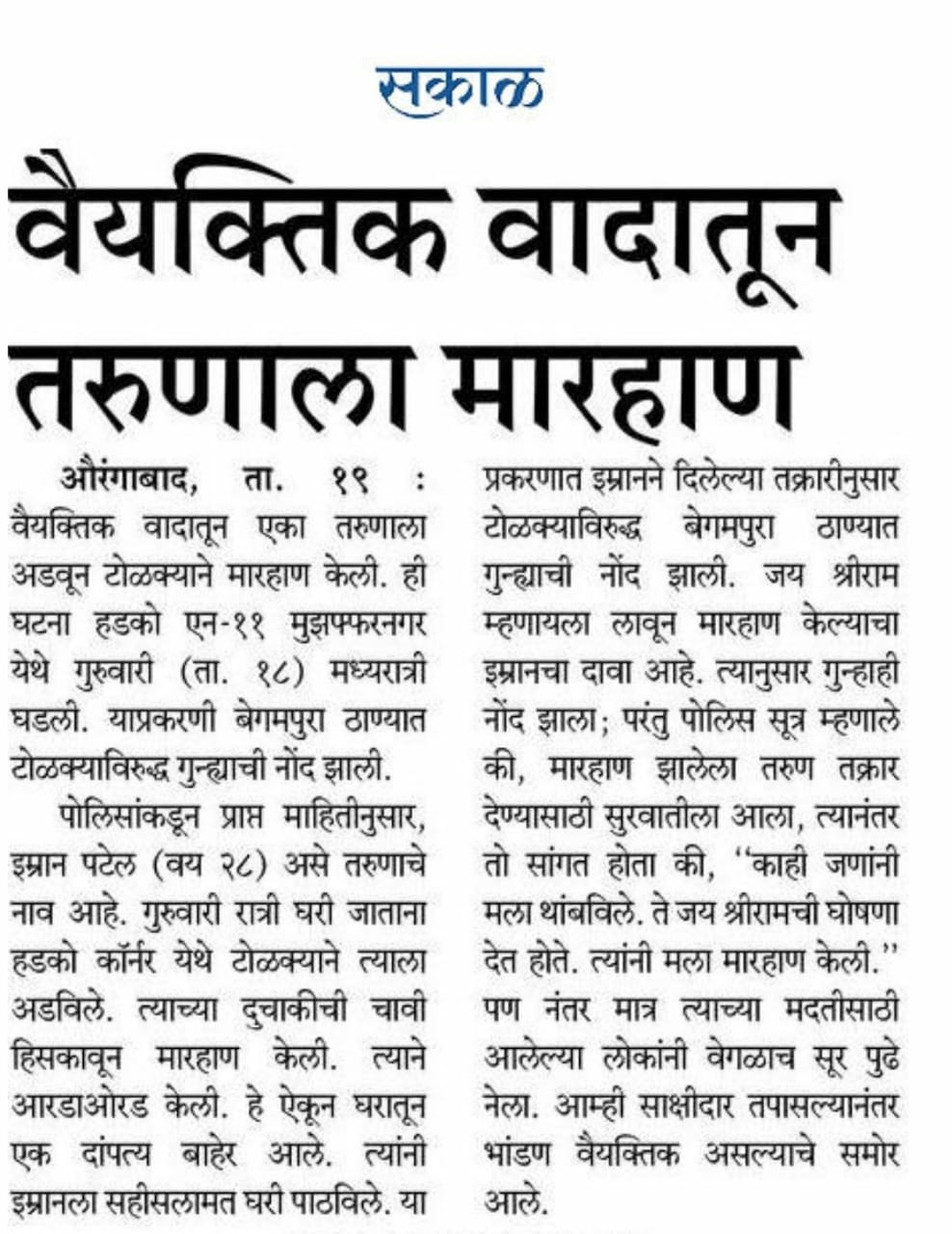 The police said that the investigation is underway and the allegation of the communal slogan is being verified.

Incidents of members of the minority community being cornered and forced to say "Jai Shri Ram" has been reported from various parts of the country in the last few months. However, several such incidents have turned out to be false.

Therefore, unless the investigation completes, it cannot be claimed with certainty that Imran was forced to chant ‘Jai Shri Ram’ by the assaulters.

The victim's or eyewitness' statements should not be accepted on the face value. These are just statements and may not reflect the truth. So, we will not give any conclusion in this case and will wait for the investigation to be completed. The article will be updated as soon as we get further information in this case.

A similar case had happened in an Unnao's Madrassa where it was claimed that a group of Madrassa students was brutally attacked by some people for not chanting "Jai Shri Ram". However, after an investigation by police, no religious angle emerged in this case.

In another similar incident which took place on 4th July, it was initially claimed that a group of men locked up an auto driver in a washroom and pelted stone at him for not chanting "Jai Shri Ram". But later it came into the light that he was thrashed for refusing an auto-ride to the accused.

To create communal tension, there have been cases when Muslim men have forced another Muslim to chant Jai Shri Ram, recorded the video and shared it on the internet.