Hindu Woman converted to Islam because it is the best religion: No, she was forced to convert by her Muslim in-laws 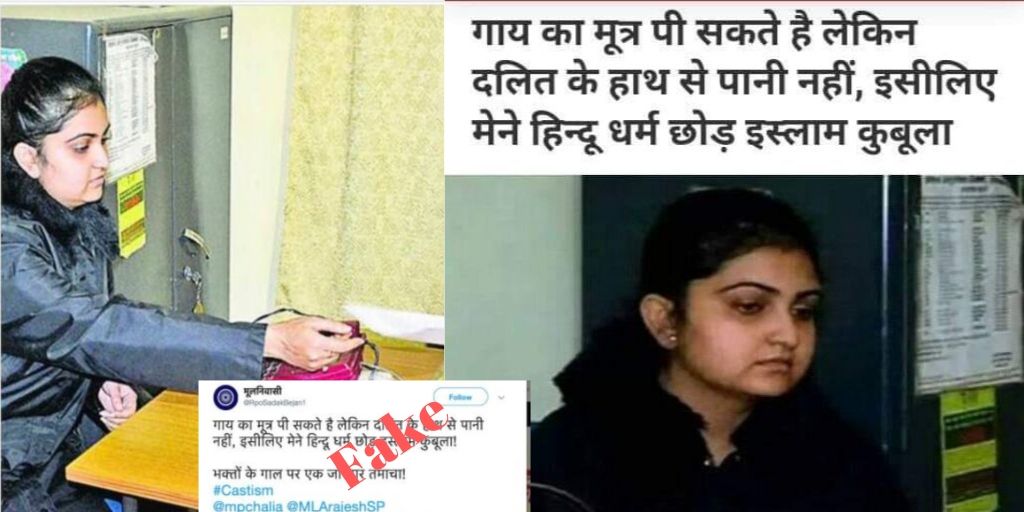 The woman in the picture used by Voter Giri is Jaya Bhandari who was forcibly converted to Islam in January 2015 by her husband and in-laws. The claim that she left Hinduism and converted to Islam because she found Islam the best religion of the world is false.

A picture of a woman is going viral on social media with a claim that a Hindu woman converted to Islam because Hindus can drink the urine of cows but avoid drinking water from the hand of a Dalit.

The viral post on social media also claims that the girl studied Islam closely and found it to be the best religion in the world because it is a religion of peace and it has given most rights to women. A Facebook user Sajjad Nizami shared the long post in Hindi in a Facebook group. 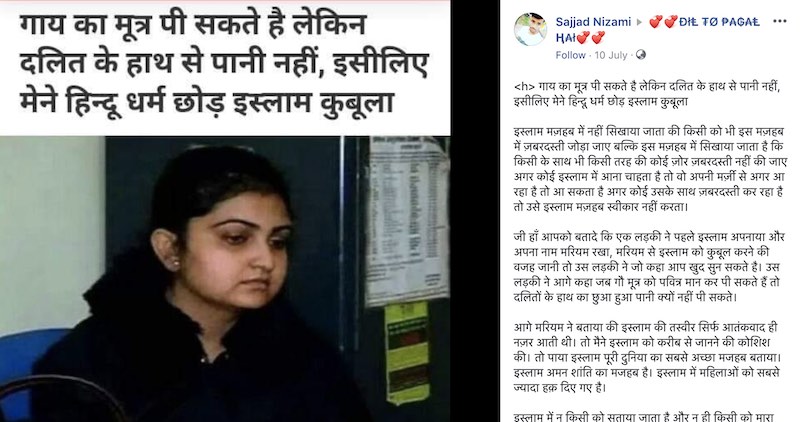 A simple google search with keywords revealed that this was first published by a little know website Voter Giri on June 14, 2017. As per the article, the girl converted to Islam and changed her name to Mariyam. You can read the archived version of the article here. 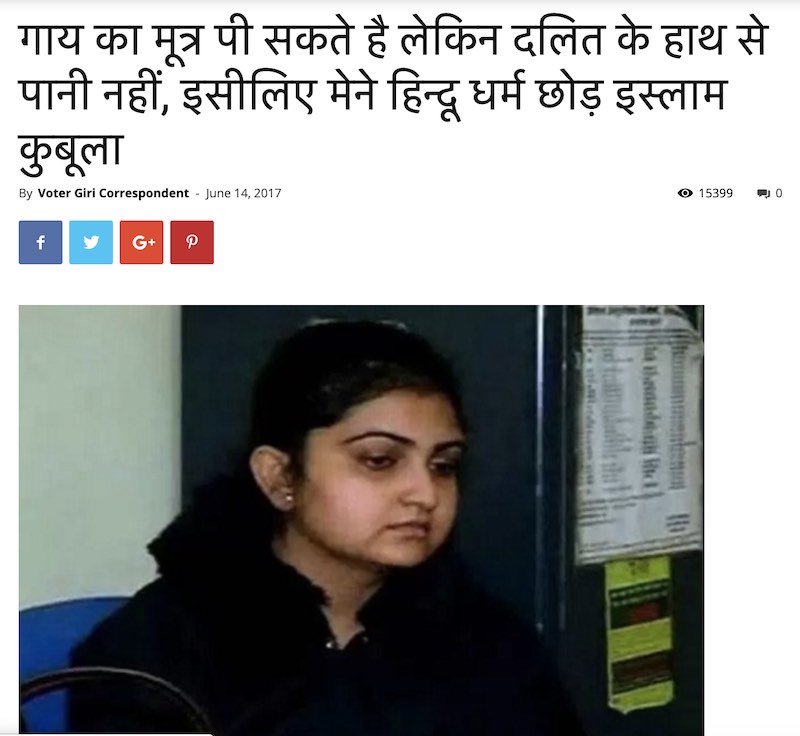 We found that many people on Twitter are sharing the link of this article by Voter Giri to make similar claims. You can see all such tweets here.

A tweet by a @RpoSadakBejan1 has more than 100 retweets and 300 likes. 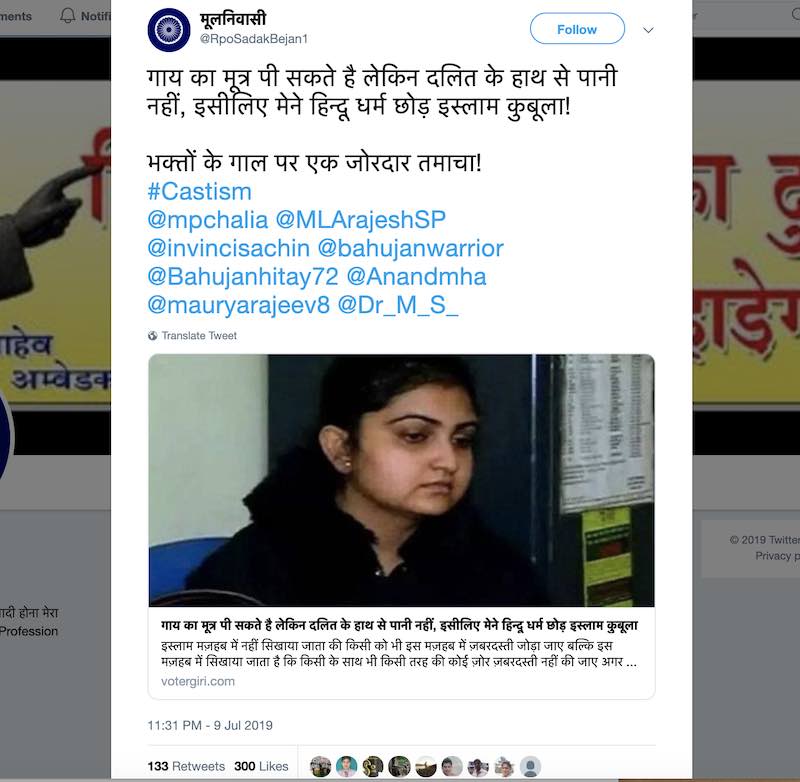 A case of forced conversion

We did a reverse image search on the Google which took us to a website dredpic.pw where this picture was used with a caption, "Inhumane Islamic torture on Hindu married girl by her Muslim Husband and Family in a brutal row for forced conversion."

We used different keywords to search on Google about the forced conversion cases and found a report by Hindustan Times with the photo of the same woman. The report mentions her name as Jaya Bhandari who filed an FIR after she was assaulted and forcibly converted to Islam by her second husband Waqar Danish Anwar and his family.

The first investigation report (FIR) says her in-laws allegedly change her name and forced her to eat beef, besides assaulting her when she refused to pay a dowry of `5 lakh.

Bhandari tied the knot with Anwar on November 10, 2013 at a temple on the outskirts of Ranchi. She was a divorcee with a seven-year-old daughter when Anwar proposed her for marriage. As per the complaint, her name was forcibly changed to Zoya Anwar.

She said, “I was first confined to a room and tortured, where the forceful conversion and nikah took place”. 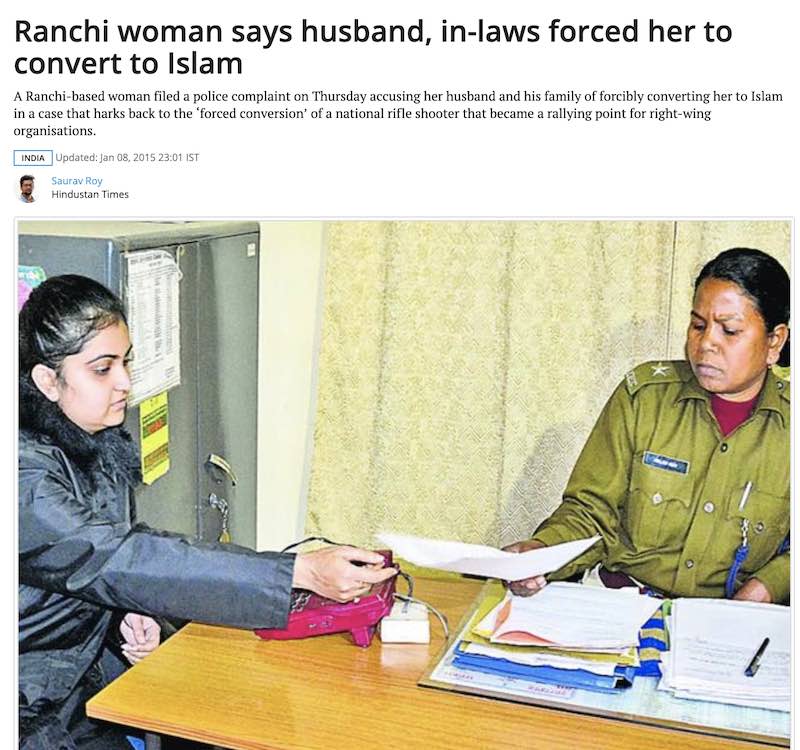 Conclusion: The woman in the picture used by Voter Giri is Jaya Bhandari who was forcibly converted to Islam in January 2015 by her husband and in-laws. The claim that she left Hinduism and converted to Islam because she found Islam the best religion of the world is false.