Sabiha Khan became a Hindu to support Mohammad Tabrez: No, the claim is false

The claim that a Muslim woman Sabiha Khan projected herself as a Hindu to support Mohammad Tabrez is false. The girl holding the placard belongs to the Hindu community.

Last week, a group of activists held a rally at Jantar Mantar to protest against the alleged lynching of Tabrez Ansari in Jharkhand. Since then an image of a girl holding a candle and placard in her hands is going viral on social media.

The text on the placard reads "I am a Hindu and I love Muslims. Muslims are my brother, sisters, and spouses. You killed our Tabrez. We all are Tabrez. Your hate is too small in front of us all. #NoToHindutvaTerrorism Hindu Love Muslim". 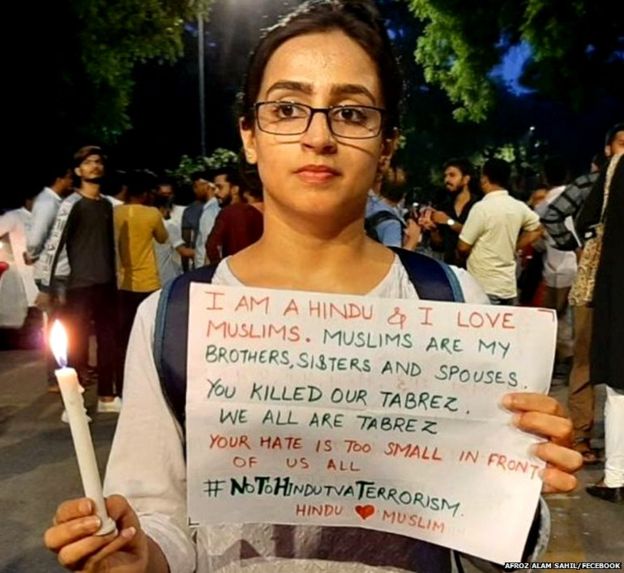 Many people on social media are claiming that the woman in the picture is actually Sabiha Khan and she is pretending to be a Hindu. A popular Twitter handle @Exsecular tweeted it with a sarcastic caption "Gangadhar hi Shaktimaan hai". 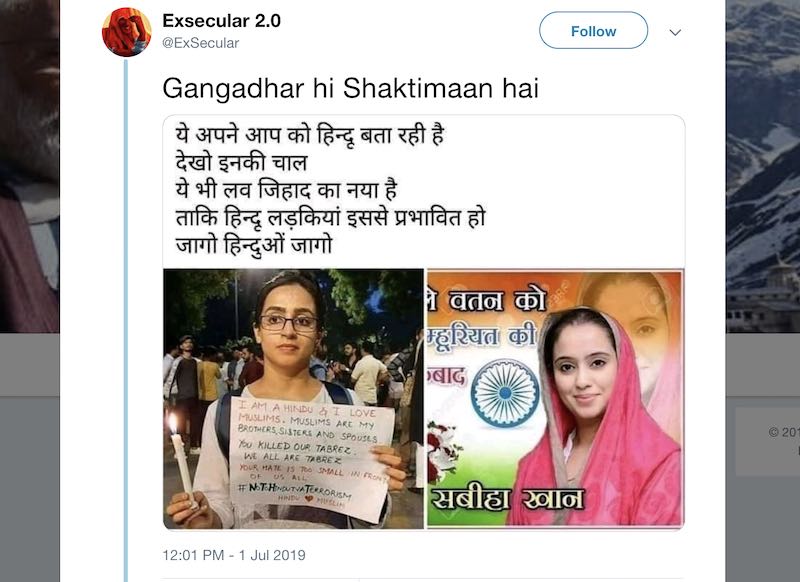 Several other users on social media have made a similar claim that both women are the same. Another screenshot of a tweet is going viral on Whatsapp and Facebook. The tweet reads "So Sabiha Khan became a Hindu to support Jharkhand Criminal Mohammad Tabrez and to protest against Hindus. Now make Sahiba Khan famous who claimed to be Hindu to support a Muslim thief and protest against Hindus. This is an example of Al Taqqyiya and Jihad". 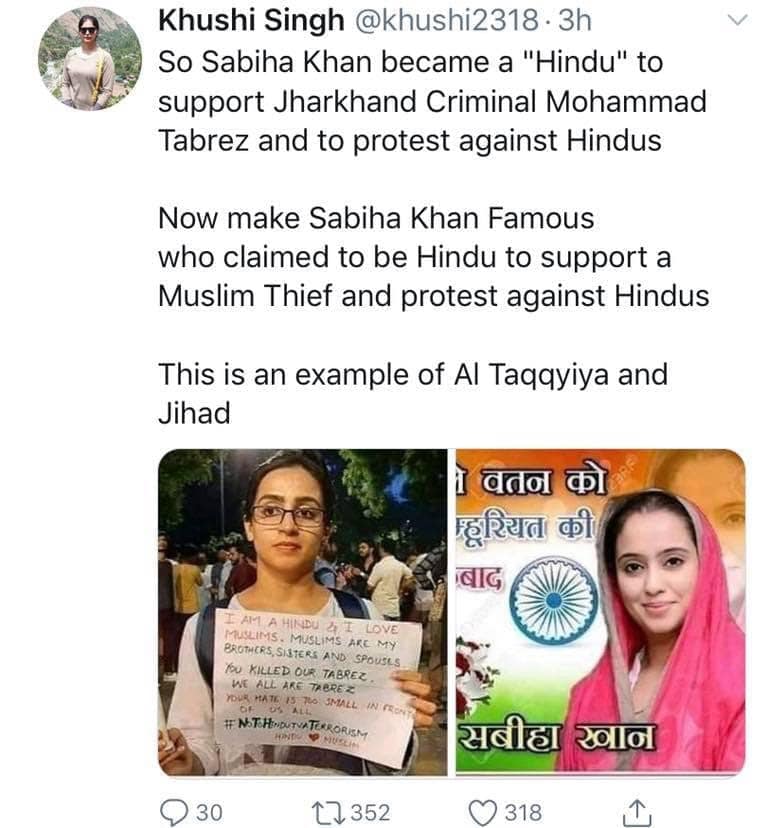 Not the same women

Even though their face has some similarities, they are not the same person. We did a reverse image search and found that the picture was first shared by journalist Afroz Alam Sahil on his Facebook wall on June 26.

The same picture was published by media houses like BBC and Beyond Headlines. Sabiha Khan had also shared this picture on her Facebook wall on June 27th.

We reached out to the girl on Facebook to verify her identity. We have decided to not to disclose her identity in order to respect her privacy. 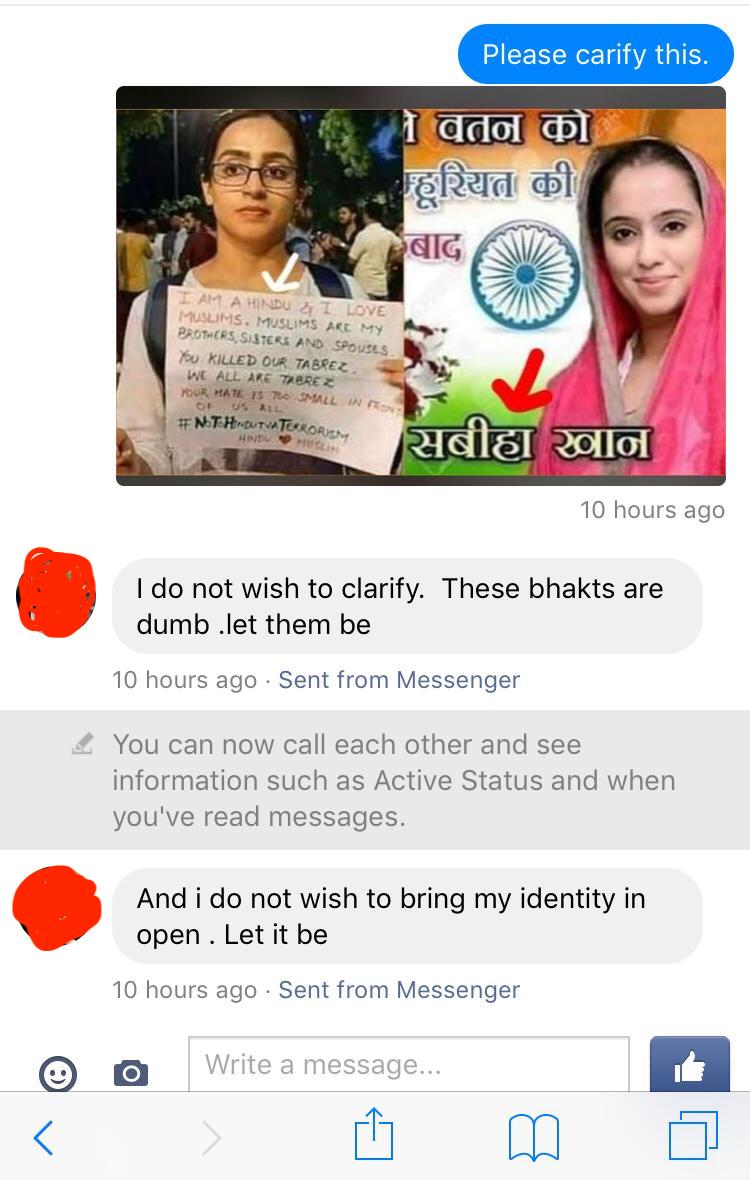 Conclusion: The claim that a Muslim woman Sabiha Khan projected herself as a Hindu to support Mohammad Tabrez is false. The girl belongs to the Hindu community.

We also found a video from the rally in which the same girl can be heard speaking. She gave her opinion that our society failed the day when we didn't come out on the streets when Akhlaq and Pehlu Khan was lynched. She further accused BJP (without taking name) for these lynchings.

She claimed that Two nation theory was not proposed by Jinnah but he borrowed it from RSS and right wings. However, we have already debunked this claim to prove that Savarkar was not the architect of Two Nation Theory which led the partition. It was Sir Syed Ahmad Khan who seeded the Two Nation Theory. Muhammad Iqbal (Allama Iqbal)'s presidential address to the Muslim League on 29 December 1930 is seen by many as the first exposition of the two-nation theory in support of what would ultimately become Pakistan. Muhammad Ali Jinnah borrowed two nation theory from Sir Syed Ahmad Khan and Md. Iqbal and not from RSS or Savarkar because as per Savarkar's Two Nation Theory, "there are two nations in India, India shall not be divided into two parts, one for Muslims and the other for the Hindus; that the two nations shall dwell in one country and shall live under the mantle of one single constitution." You can read our detailed article on this here:

Fact Check : No, Savarkar was not the architect of Two Nation Theory which led the partition

Tabrez Ansari was beaten up by a mob on the suspicion of theft on 17 June in Jharkhand. His family alleges that a mob thrashed him and forced him to say "Jai Shri Ram" and "Jai Hanuman" before handing him over to the police the next day. Reportedly, the beating left him unconscious. Four days later, on 22 June, he breathed his last at Saraikela Karsawan civil hospital, where he was being treated under judicial remand. Video of his beating is going viral on social media in which a few people can be heard asking him to chant "Jai Shri Ram".

Several media houses and activists have called it a hate crime. But we at Fact Hunt believe that it will be unfair to put this incident in the category of hate crime and we have a genuine reason for it. Last year, a 27-year-old tribal youth, Madhu was beaten to death on allegations of theft.

A few days back, Mohd Sameer was beaten inside a mosque by a fellow Muslims in UP's Hapur on suspicion of mobile theft. A few weeks back, a suspected thief beaten to death by shop-owner as reported by IANS.

In 2011, a thief was beaten to death by villagers in Mahaboobnagar, Telangana.

All these cases clearly show that Mon hardly cares about the religion of the thief. In Tabrez's case, some people did ask him to chant Jai Shri Ram but that was not the primary reason. He was thrashed because he was caught on the suspicion of theft.

Civil Surgeon Dr. AN Ray said, “Stress-induced cardiac arrest could have led to the sudden death of Ansari since no internal injury was found during his post mortem examination”.

Ever since BJP led NDA govt came into power for its second term, there has been an attempt to build a narrative that Muslims are being targetted by Hindus in the name of religion.

However, we debunked several cases of hate crimes which were proven wrong. You can read our detailed article here:

A few weeks back, Gangaram Singh Chauhan was lynched inside his own house by his Muslim neighbors when he wrote a police complaint about his minor daughter who went missing in UP’s Moradabad district. The incident has been widely ignored by the mainstream media let alone the protests by the activists.

It's human nature to stand with victims and we appreciate that these activists are standing up for the victims of the minority community who were lynched by cow vigilantes but it will be a great disservice to our society if we don't speak for the innocent farmers who have lost their lives at the hand of cattle smugglers. You can read our detailed report on this topic here:

Cattle smugglers are killing owners across India, farmers are facing a threat to life and livelihood