UP cop asked the gang rape victim to have sex with him before registering FIR: Another false accusation against Police

The claim that a cop in UP asked a gang rape victim to have sex with him before registering an FIR is false. The victim had lodged a fake gang-rape case which the SI had exposed due to which she tried to frame the S.I.

On 25th June, Singer Chinmayi Sripaada tweeted an article which claims that UP cop asked a 37-year-old gang rape victim to have sex with him before registering FIR.

Her tweet with a caption "Meanwhile in Uttar Pradesh" suggests that this is a recent incident and her tweet has received more than 700 retweets. 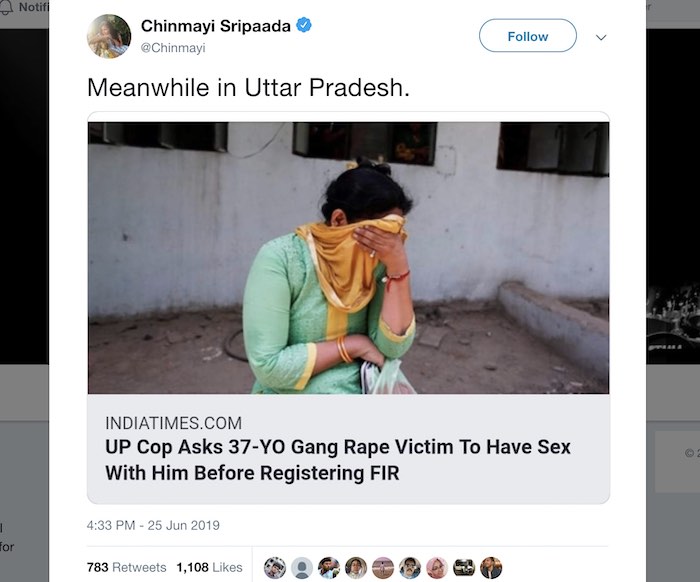 National Vice President of Indian Youth Congress Srinivas B V tweeted another article related to the same incident by Times of India with a message "#NewIndia Example Shame On You @myogiadityanath UP Cop Asks 37-YO Gang Rape Victim To Have Sex With Him Before Registering FIR". 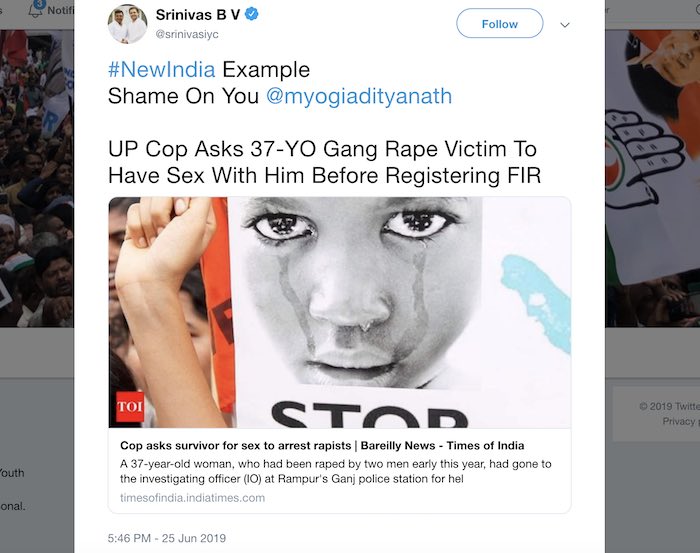 As per the report dated 22 June 2017 by Indiatimes.com, the woman was gang-raped by two men, one of whom was known to her, on the night of February 12 when she had gone to visit a relative and was on her way back to Rampur city. The two offered her a lift, dropped her home and later gang-raped her at gunpoint when they found she was alone in the house.  The two persons were identified as 55-year-old Ameer Ahmad and 45-year-old Sattar Ahmad who were booked under IPC's sections 376 (D) (gangrape), 323 (voluntarily causing hurt) and 506 (criminal intimidation).

However, the rape survivor told TOI, "My ordeal began soon afterward. Whenever I approached SI Jai Prakash Singh seeking the arrest of the accused, he would say he first wanted to have sex with me. He even called up on my mobile phone and invited me to visit him in his room alone. When I turned him down, he filed a closure report in the case a fortnight ago."

She had secretly recorded her conversations with SI Jai Prakash Singh and handed over a CD to the SP.

As per the report, Rampur superintendent of police Vipin Tada had said that Prima facie, the voice in the audio clip doesn't match with that of the SI. But they will investigate her charges thoroughly.

The official Twitter handle of UP Police Fact Check has shed lights on the entire case. They tweeted to call out Chinmayi Sripaada for sharing an old and misleading report. 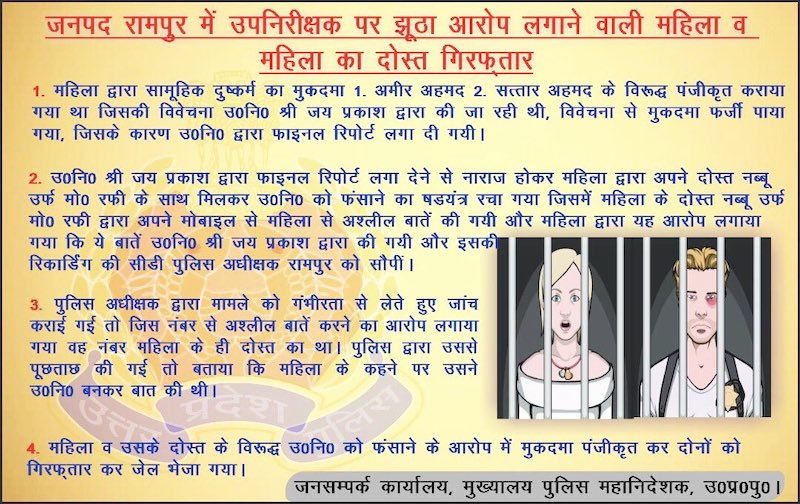 According to UP Police, the woman had filed false rape charges against the two men. When S.I Jai Prakash closed this report, the woman tried to frame the S.I with the help of her friend Md. Rafi. In the investigation, it was found that the number from which she had received the vulgar call belonged to her friend. A case was registered against the woman and her friend for trying to frame S.I in a false case.

Several people on Twitter pointed out that this is a 2 years old news which later turned out to be false. However, she refused to delete her tweet by saying she doesn't believe UP police. She went on to argue that due process was not followed by the police and suggested that the S.I was given clean chit just because he claimed his innocence. 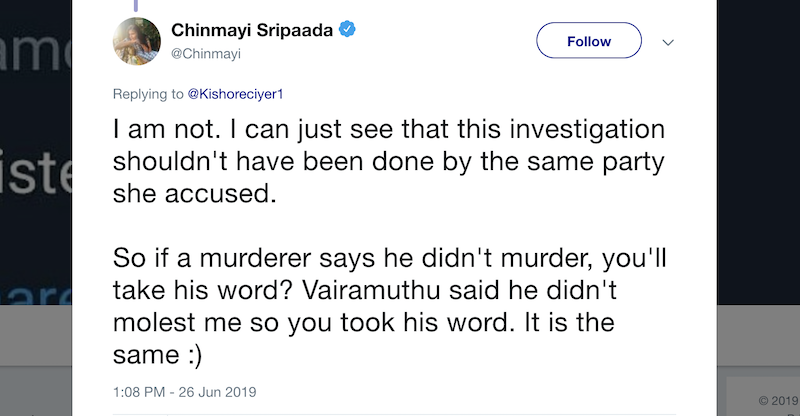 However, her argument doesn't seem to be valid. S.I was not given clean chit just because he pleaded not guilty. A proper inquiry was conducted which proved his innocence.