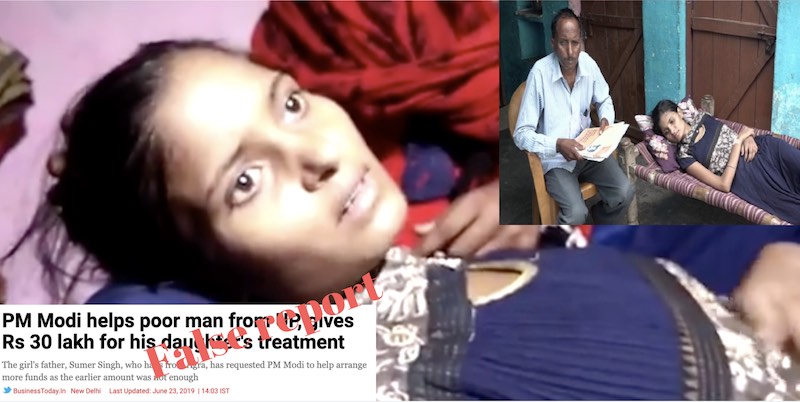 ANI misreported that PM Modi has sanctioned a grant of Rs 30 lakh for the treatment, a girl suffering from aplastic anemia after her father had written to him seeking help for her treatment. In reality, only 3 lakh was approved.

On June 22, ANI reported that prime minister Narendra Modi has sanctioned a grant of Rs 30 lakh for the treatment, a girl suffering from aplastic anemia after her father had written to him seeking help for her treatment.

Aplastic anemia is a medical condition that leaves the patient at a higher risk of infections and uncontrollable bleeding. It occurs when the body stops producing enough new blood cells.

As per the report PM Modi's office released the money from the Prime Minister's National Relief Fund. 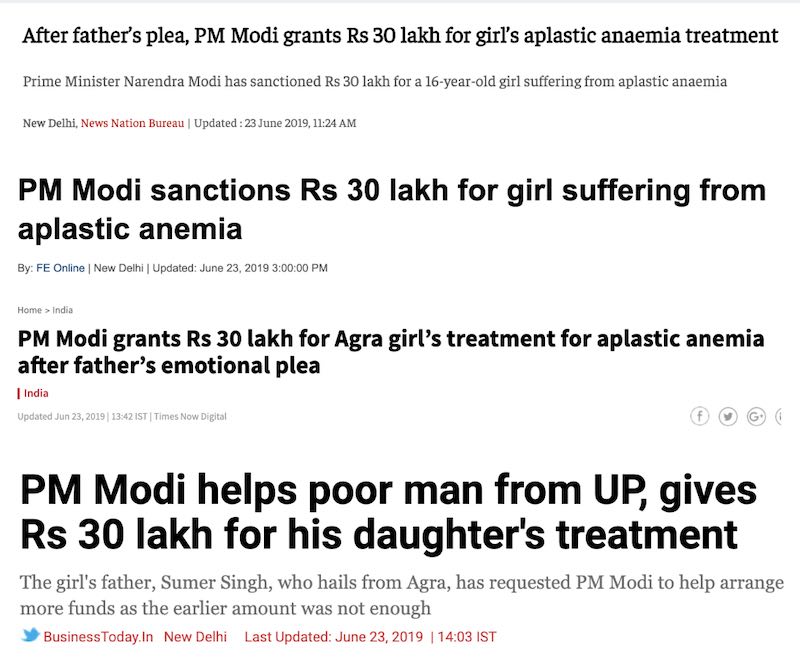 A Times of India's journalist Arvind Chauhan pointed out on Twitter that only 3 lakh has been sanctioned by PMO's office and she is now facing delay due to wrong media reports. He also shared the letter from PMO's office. 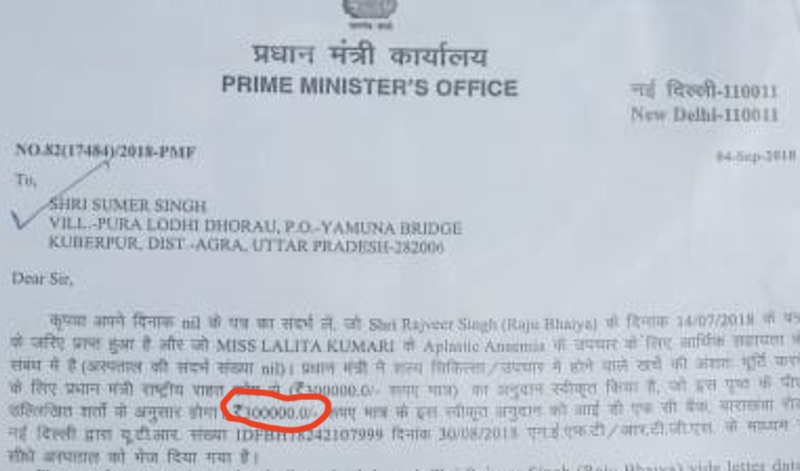 The full letter from PMO's office can be read here.

Shocked at these fake reports being shared on the social media, Lalita’s father Sumer Singh told TOI, “After the intervention of MP Rajveer Singh, who wrote a letter to PMO for financial assistance, only Rs 3 lakh was sanctioned last year on September 30. The report of Rs 30 lakh grant is fake and it has hurt our efforts to get help for my daughter. We need help for our dying girl. This fake news can cost my daughter’s life.”

Lalita is undergoing treatment at the department of medical oncology & BMT, RK Birla Cancer Centre, Sawai Man Singh Medical College and Hospital in Jaipur. She needs a bone marrow transplant from her brother to survive as hers had completely become useless. The cost is approx Rs 10 lakh. The letter from the hospital can be read here.

Sumer Singh, girl’s father further told TOI, “Every month, I have to arrange for six units of blood for Lalita. Her condition has deteriorated over the last two months. I have sold my farmland, mortgaged my house to pay her medical bills of nearly Rs 6.5 lakh. Currently, she is being treated at Sawai Man Singh Medical College in Jaipur, where doctors have asked us to arrange for Rs 10 lakh for bone marrow transplant. But I don’t have the money.”

The bedridden Lalita said, “Had PMO office granted Rs 30 lakh against Rs 10 lakh requirement, I would have got new lease of life. This is cruel. Whoever has spread this fake news must visit me and see my condition. My family has lost their entire savings, farmland and mortgaged our home to pay my medical bill.” Her video is shared by Arvind Chauhan which you can watch here.