Jamnagar-Junagarh highway bridge collapsed within 3 months of inauguration: No, Congress made false claim 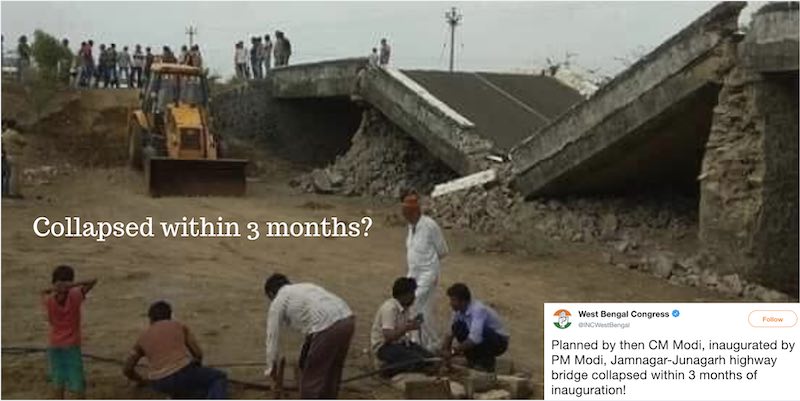 The bridge on Jamnagar-Junagadh Highway didn't collapse within three months of its inauguration. It was 50 years old bridge. INC west Bengal falsely claimed that the collapsed bridge was planned and inaugurated by Narendra Modi.

The West Bengal Congress while taking a dig at Prime Minister Narendra Modi claimed that a bridge which was inaugurated by him three months back has now collapsed on the Jamnagar-Junagadh Highway. The tweet has a photo of the collapsed bridge.

The tweet reads, "Planned by then CM Modi, inaugurated by PM Modi, Jamnagar-Junagarh highway bridge collapsed within 3 months of inauguration!". 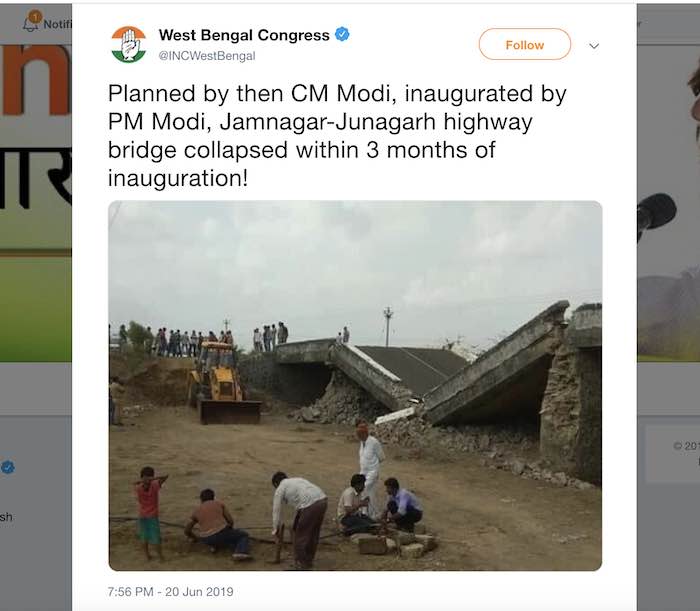 The tweet by West Bengal Congress was liked by Rahul Gandhi as well. 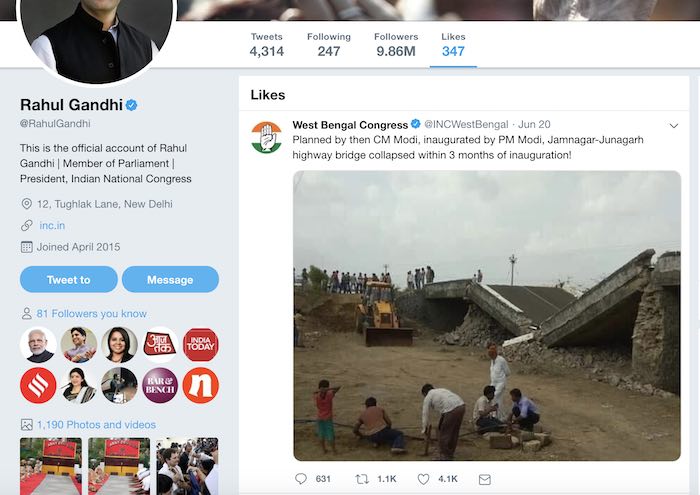 Many other users have tweeted the picture with the same claim.

The Facebook page of West Bengal Congress shared the same image with an exact caption.

With the help of reverse image search, we found an article in a local news website which confirms that a bridge on the Jamnagar-Junagadh road near Satudad village, around 14km from Jamkandorna taluka, did collapse on June 19.

However, the bridge that collapsed was built more than 50 years ago.  It was confirmed to India Today by Sub-divisional magistrate (SDM) GK Miyani.

Speaking to India Today, Jitendra Singh Jadeja, the sarpanch of Satudad village, said, The bridge was more than 50 years old and was lying in a dilapidated condition. We informed the administration about this but nobody took necessary action. Jadeja also told us that the bridge was never inaugurated by PM Modi. A tar coal road on the bridge was built around one-and-a-half-year ago.

Conclusion: The bridge on Jamnagar-Junagadh Highway didn't collapse within three months of its inauguration. It was 50 years old bridge. INC west Bengal falsely claimed that the collapsed bridge was planned and inaugurated by Narendra Modi.