No, Govt of India didn't sell the Red Fort for 25 crore: debunking misinformation about "Adopt A Heritage" project

The claim that the government of India has sold Red Fort to Dalmia Group is false. Dalmia Group has adopted the Red Fort under Corporate Social Responsibility. As per the MOU, the revenue generated from the public will be re-invested back in its development and maintenance.

The ‘Adopt A Heritage: Apni Dharohar, Apni Pehchaan’, scheme was launched on 27th September 2017 with the collaboration of Ministry of Tourism, Ministry of Culture, Archaeological Survey of India (ASI), and State/UTs Governments. The Project envisages involvement of Private/Public Companies / Organizations and Individuals to adopt Monuments, Natural Heritage Sites and other Tourist Sites in the country to develop and maintain tourist amenities at heritage sites and making them tourist friendly, to enhance tourism potential and cultural importance in a planned and phased manner.

Under this scheme, Dalmia Bharat Ltd adopted Red Fort in Delhi. Ever since the news came out, there was a murmur on social media that the central governemnt has sold Red Fort for Rs 25 Crore.

The Twitter handle of greatgameindia.com tweeted, "Do you know the Govt of India has sold the Red Fort for 25 crore Rs?". It all started with a misleading report by Business Standard (which has now been updated).

The article whose title reads "Dalmia Bharat group to adopt Delhi's iconic Red Fort for five years" has URL's slug "shah-jahan-s-iconic-red-fort-in-delhi-is-now-dalmia-group-s-red-fort" which suggests that the article's headline was updated later.

Many social media users shared the Business Standard article to claim that the government has sold Red Fort. A Twitter user @Ra_Bies tweeted, "Government first sold Red Fort to private company for a petty sum. God know what is now cooked in Red Fort. I think they’d steal all the gems. As if it wasn’t enough, this Sanghi govt sold Flipkart to Walmart. I suspect someday all us will be in US custody mopping NY footpaths". You can see the archived tweet here.

Many popular handles like My Fellow Indian abused the prime minister for it. You can see all such tweets here.

TMC MP Derek O'Brien tweeted "Wah! So here is acche din. Red Fort being 'sold '? Now other national treasures ready to be auctioned to highest bidder. As Chairman Parliament Cmtee of Transport Tourism & Culture, can say matter was still being "discussed". Pledge to stop this".

Newsclick.in also contributed to this misinformation campaign. In Delhi, protesters took to the streets on 10th May 2018 for a Padyatra from Rajghat to the Red Fort. Newsclick.in termed this protest as a way to condemn the 'sale' of the Red Fort, a monument that is seen as an important icon for the Indian Freedom Struggle.

They covered the protest and uploaded the video on their Youtube channel. Many protestors can be seen claiming that the government has sold Red Fort.

The Red Fort hasn't been auctioned for five crores a year or sold for Rs 25 crore. It is the minimum amount the Dalmiya group has committed to spending on ensuring tourist friendly faculties - like drinking water, toilet blocks, facilities for physically challenged, pathways, cultural notice boards/signage, vehicle parking, cloakrooms, etc. The revenue generated by the Dalmiya Group during the adoption period has to be reinvested back in its development and maintenance.  So, there is no scope for profit. The ownership of the Red Fort will continue in perpetuity with the government of India and its agencies.

Here is the relevant section from the MOU. 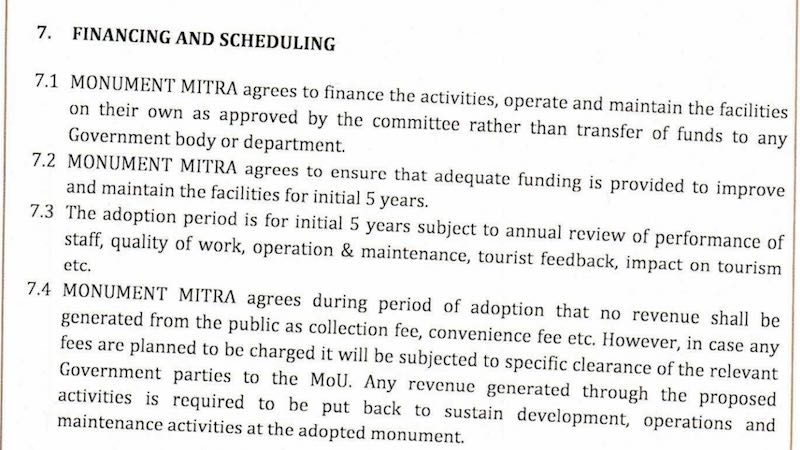 Here is the link to the documents of "Red Fort's MOU".

Conclusion: The claim that the government of India has sold Red Fort to Dalmia Group is false. Dalmia Group has adopted the Red Fort. As per the MOU, the revenue generated from the public will be re-invested back in its development and maintenance.

This is a year old rumour and it started when Fact Hunt was not even operational. But surprisingly, none of the existing Fact Checkers debunked it except ABP News' Viral Sach.