Swati Chaturvedi and other Congress supporters shared a misleading screenshot from an old video to falsely claim that Amit Shah was sleeping in the parliament.

Congress president Rahul Gandhi walked into another controversy in this ongoing parliament session when he was caught using his phone while President Ram Nath Kovind was addressing a joint session in Parliament. You can watch the video here.

To counter this many Congress supporter have started sharing a picture of the newly elected home minister Amit Shah taking nap inside the parliament while Union Law Minister Ravi Shankar Prasad was speaking.

A Twitter user @snapnchat tweeted "If @RahulGandhi is using his mobile it's an insult to the parliament but if @AmitShah takes a nap it's alright... Heights of Hypocrisy". 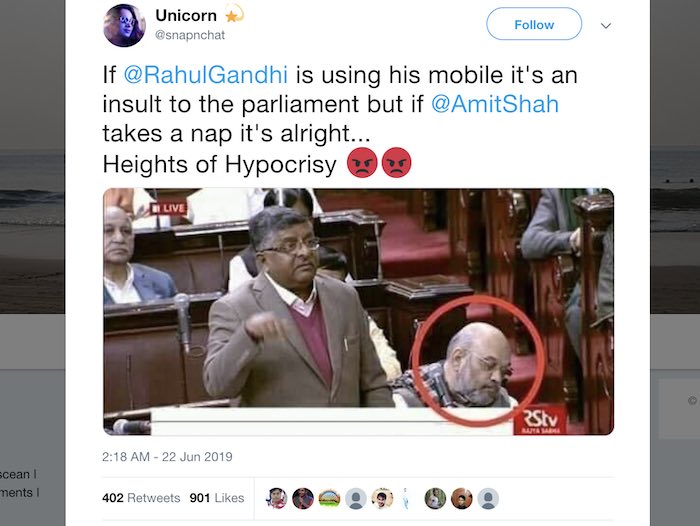 Another Twitter user Bose Shruti tweeted the picture with a caption "Levels of hypocrisy of bhakts : unmatched! @RahulGandhi using his phone is a problem but then @AmitShah sleeping is not!". Her tweet was retweeted more than 500 times and was liked by more than 1500 users.

Amiti Pandey, the general secretary of MP Youth Congress tweeted the picture with a message "Amit Shah merrily snores away his time at Parliament thereby dignifying it. But Rahul Gandhi insults the same institution when he looks at his phone. #BJP ko apni dictionary bhi release kar deni chahiye on how it perceives terms and their definitions to be. #BJPSeDemocracyBhachao".

Swati Chaturvedi who is a journalist also tweeted the picture with a caption "Shah in deep chintan or as we call it sleeping". 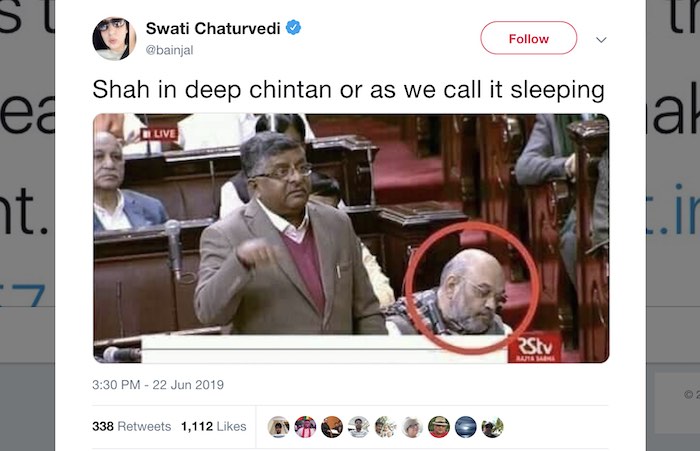 Amit Shah was not sleeping

We were able to find the video and after watching the video we were able to establish that Amit Shah was not sleeping but was actually reading something. You can watch the whole incident here:

At the start of the video, Amit Shah was constantly looking at Ravi Shankar Prasad. He then picks some papers from the desk and started reading. The screenshot was taken when was reading those papers with his face down. While reading we can clearly notice his face movement.

Conclusion: The claim that Amit Shah was sleeping in the parliament while Ravi Shankar Prasad was speaking is false.

An old incident from Winter Session

The above incident is not from the ongoing session of the parliament. The video is from the previous winter session. We found that a clipped version of the video was uploaded on Youtube by Hindustan Times on 9th January 2019. You can see the date in the screenshot below (highlighted in red). 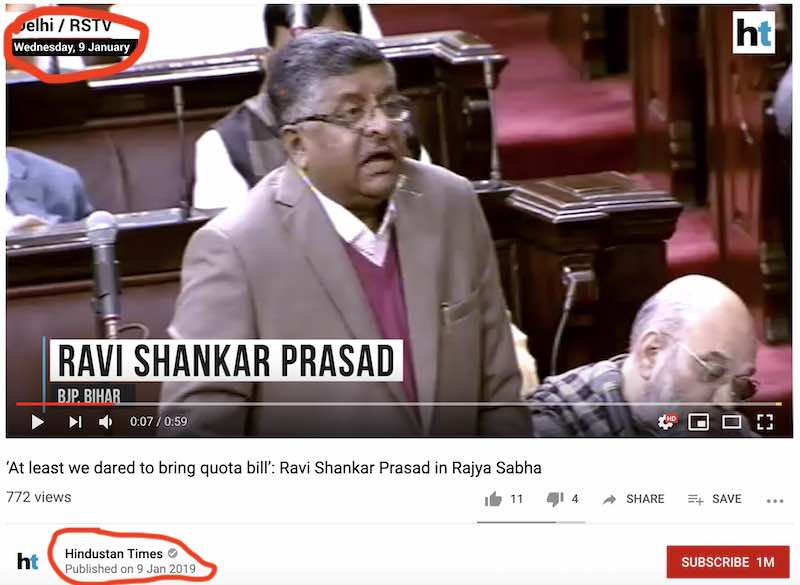