Fact Check : Was Vishal Jangotra acquitted due to lack of evidence in Kathua rape and murder case 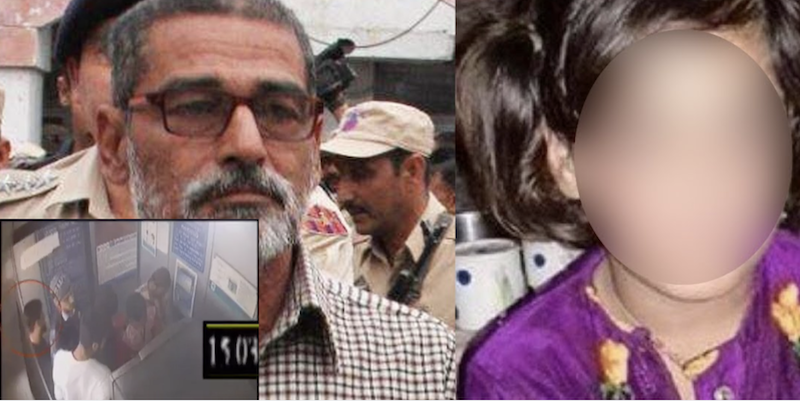 The claims that Vishal has been acquitted due to lack of evidence against him is misleading because according to the court verdict on the Kathua murder and rape case, Vishal acquitted because all the available evidence supported his claim that he was not in Kathua when the crime was committed.

On the 10th of June, a special court had delivered the verdict of the rape and murder case of an eight year old girl in Kathua. Seven people were reported to be accused in this case. Out of the seven, one person named Vishal Jangotra has been acquitted by the court. This led to some people on social media claiming that Jangotra was acquitted due to the lack of evidence against him.

A Twitter user Raghav Ohri tweeted: "Alert & correction: Vishal Jangotra, one of the seven accused has been acquitted by Court for lack of evidence. Six of the eight Convicted. Case against juvenile- one of the accused- yet to be decided by the Juvenile Court ". 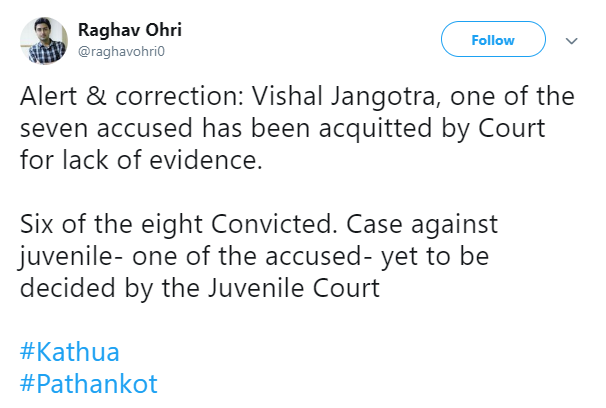 A Facebook user Sophia Garcia wrote "He is Sanji Ram; a retired revenue officer and caretaker of the temple in which the little Aasifa was kept locked-up for days, repeatedly gang-raped, drugged, starved and tortured. He is believed to be the mastermind of whole episode.
This 61 year old fanatic and his SON were two of the 7-8 rapists who gang-raped the little Aasifa in Indian Held Kashmir for four days. He is sentenced to life imprisonment and his son was freed over lack of evidence."

These are some of the many posts and tweets that claim that Vishal Jangotra was acquitted by the court because of the lack of evidence against him. It is reported that three of the seven convicted have been ordered to serve life imprisonment and the other three who were police personnel have been sentenced to five years in prison. So, why was Jangotra acquitted by the court verdict? It is not because of the lack of evidence against him, but because of the evidence found that proves him to be innocent.

Vishal presence in Muzaffarnagar was proven

Reports from Zee news, Times of India and Economic Times detail as to why Vishal was acquitted by the court verdict. It is reported by Zee News that the court had used their news clip as main evidence that proves the chargesheet claims as false. There were 3 videos used by them which shows that Vishal was in Muzaffarnagar, Uttar Pradesh whereas the chargesheet claims made by the Jammu and Kashmir police were otherwise. According to the article, “The three videos clearly established the fact that Vishal was present in Muzaffarnagar, Uttar Pradesh, at around 4 pm on January 12, 2018, and he did not reach Kathua at 6 am in the morning on January 12 as claimed by the police in its charge sheet”.

The three videos show Vishal’s activities in and outside an ATM at Muzaffarnagar. This stands as evidence to Vishal’s claims that he had gone to Meerut to write an exam when he was arrested. Moreover, the article also confirms the authenticity of the video by stating that “Raju Kerni, Zee News Bureau Chief, Jammu (DW-15), has certified the CD and the pen drive to be genuine one as per actual occurrence and without modification, therefore the same certainly be relied upon for reaching at a just decision”.  Zee News has also published an exclusive article which reports Vishal’s claims that he was “Was tortured, forced to admit to rape, murder charges in Kathua case”. He has also claimed that videos of him appearing for the examination which could have been used as proof was erased by the crime branch. He also made another claim that his father is also innocent. The full article can be read here.

Tejwinder Singh, in his judgment, concluded that Vishal Jangotra, son of Sanji Ram, was not present in Kathua when the eight-year-old girl was gang-raped and murdered in January 2018. Instead, he was present in Meeranpur (Muzaffarnagar, Uttar Pradesh) taking his examination.

The court ruled “it cannot be held that papers during the examination of Vishal Jangotra were not attempted by him and the arguments of the prosecution that these were attempted by somebody else cannot be believed”.

The court held that two witnesses, who claim to have seen Jangotra on January 13 and 14, 2018 in Kathua were “under some mistake relating to identity”. The witness, when appeared in the court, said that Jangotra’s face had been a bit changed.

Jangotra’s landlady also deposed in the court to claim that Jangotra was present in UP on the dates when the crime was committed in Kathua.

It is clear that testimonies of bank officials, examiners and cash withdrawals from an ATM led to the court’s conclusion that Vishal Jangotra, one of the co-accused, is “innocent”.