Muslim youth beaten and forced to eat pork by Hindu Extremists: Police denies it and ruled out communal angle 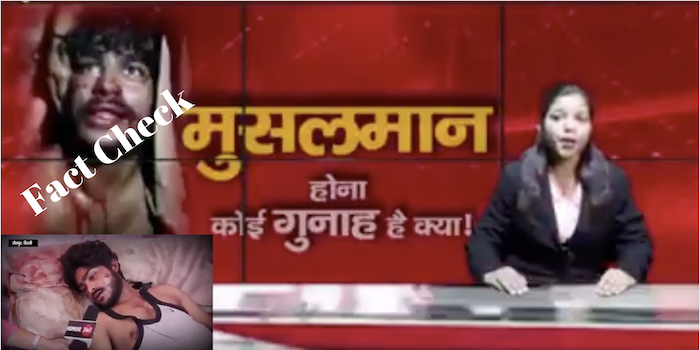 C.J. Werleman falsely claimed that a Muslim man was attacked by a mob of Modi supporting Hindu extremists. Police have refused any communal angle in this incident. Werleman claim that he was fed pork forcefully and was threatened to urinate on him is also false if we go with the police version.

On 3rd June 2019 Columnist for The Middle East Eye and The New Arab C.J. Werleman tweeted a short video of a local news channel which shows how a Muslim guy named Sajid in Jaitpur, Delhi-Badarpur Border was allegedly Mob lynched by Hindus who are Modi Supporters, beaten up by steel rods, forced fed him pork and threatened to urinate on him. In his tweet, he also claimed that "This kind of attack on Muslims has happened every day since Modi's re-election victory".

India: this Muslim man was attacked by a mob of Modi supporting Hindu extremists in New Delhi on 28 May. They beat him with steel rods, forced fed him pork, and threatened to urinate on him. This kind of attack on Muslims has happened every day since Modi's reelection victory. 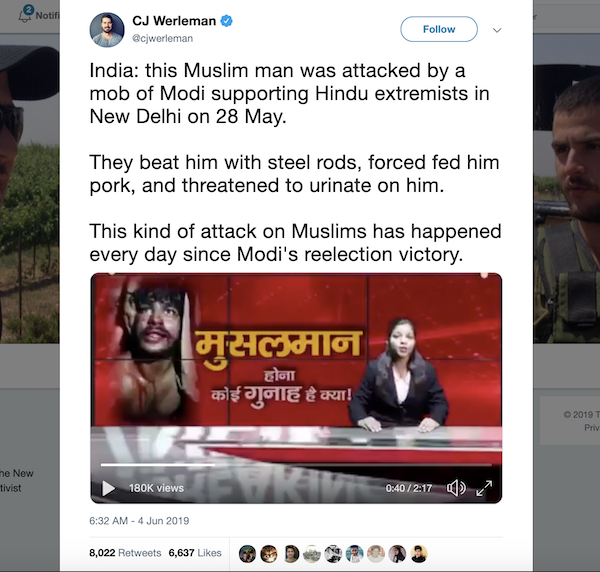 When our team looked into the matter we found that the short video of the local news channel tweeted by C.J. Werleman belongs to Hunkar 24x7. The Incident took place on 28th May 2019 and Hunkar 24x7 uploaded the video on 1st June 2019. You can watch the video here:

In the video, the news anchor said that Sajid(victim) used to work at a local cloth shop while coming back from home late at night with his friend Gaurav, two thieves (pickpocket) attacked and stole their wallet and mobile. His friend ran away to call for help while the victim was captive. The incident took place at 11.30pm near Gurudwara at Jaitpur, Delhi.

The video further claimed that the thieves attacked Sajid when they heard him saying “Ya Allah” and dragged him in a nearby colony, dumped him in auto and took him to another colony while shouting he is a thief where 70-90 people beat him with chain, belts, and rods and threatened him to urinate in his mouth and even kids in the crowd were also shouting to chop off his head and finish him off. Then his friend came to the rescue along with his mother and police and police took charge of the situation and calms the angry crowd.

But we got another version of the story when we contacted the police inspector of that area Inspector Anand to inform about the news being spread over this issue. Inspector Anand told us that in the FIR, there is no communal angle reported. When Sajid and his friend Gaurav was returning to home after work, two known people (mutual friends) started talking to them named Baljit and Debu. After some time they started fighting over some issue. Suddenly Gaurav ran away and a third person named Yameen joined them they dragged and dumped Sajid in an auto-rickshaw and after 1 hour 30 mins they took him to a nearby colony and thrashed him badly. He was rescued by one of his friends and handed over to his family.

If we trust police's version then there was no communal or political angle in this matter and all the story narrated by the victim to the news reporter seems to be exaggerated. Force feeding him a pig and threatening of urination over him was also a lie if we go by the police version.

In this case, 5 people were involved. One Hindu and one Muslim youth were victims while one of the accused (Yameen) is a Muslim himself which clearly shows that he was not beaten because of his religion. Moreover, the victim can himself be heard saying that the accused told the crowd that they have caught a thief.

All the available evidence suggest that it was certainly not a communal matter and the fight might have occurred due to either personal reasons or maybe a case of robbery.

Conclusion: The claim that the victim was beaten because of his religion appears to be false. There is no communal angle in the FIR and as per police accused and victims knew each other.

The misinformation about the incident has been shared by Werleman to further the narrative that minorities are being attacked in India following BJP's victory in the Loksabha election.

First, it was claimed by Swara Bhaskar and Dhruv Rathee that Gau Rakshaks beat up 3 Muslims in MP after Modi's victory. However, the incident happened a day before counting.

The matter was not even settled that several media houses claimed that a Muslim man was beaten up in Gurugram for wearing a skull cap. However, CCTV footage contradicted statements given by the victim.

It was then claimed that a Man was shot at in Begusarai for his Muslim name. However, as per Begusarai Police, the man was shot in Begusarai after a fight over the price of detergent. There is no communal angle in this incident and is not a case of hate crime either.

Man shot at in Begusarai for his ‘Muslim name’: Police says it was not a case of hate crime