Were 25 Yadavs killed in the past 8 days: No, the parody account of Dimple Yadav caught spreading fake news.

The claim that 25 Yadavs were killed in the past few days by BJP workers is absolutely fake. However, 5 politicians (including three of the SP, and one each of the BJP and BSP) have been killed in Uttar Pradesh after the elections.

A parody account of the wife of Akhilesh Yadav, Dimple Yadav recently tweeted out claiming that 25 Yadavs have been killed in the past 8 days in Uttar Pradesh and Bihar, following the elections. The user further accuses Modi of hating Yadavs. 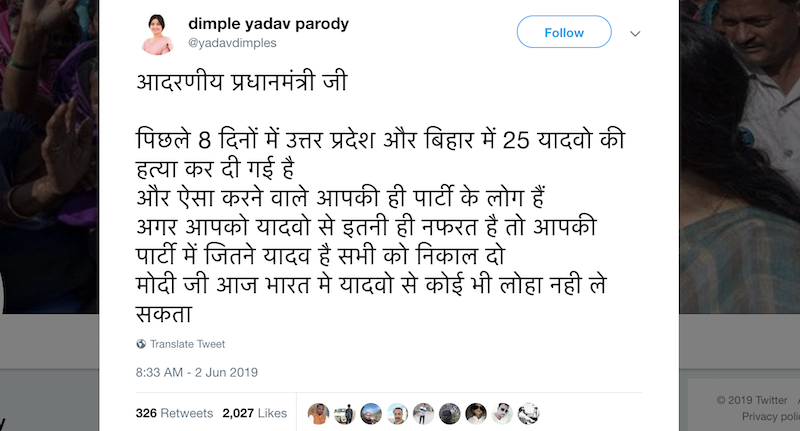 The tweet which is originally in Hindi, roughly translates to “ Respected Prime Minister, in the last 8 days 25 Yadavs have been killed in Uttar Pradesh and Bihar. And those who do that are your own party members. If you have such hate for Yadavs, then remove all the Yadavs from your party. Modiji, today nobody can stand against Yadavs in India”.

We did our research but could not find anyone else claiming this fact other than this Twitter handle. There are incidents from which the user could have developed this story but 25 killings in 8 days have not been reported by any news agency.

Looking for news stories that can be related to this user’s claim, we found some. Firstly, an Indian Express article reports that 5 politicians (including three of the SP, and one each of the BJP and BSP) have been killed in Uttar Pradesh following the elections. The motive of four of the killings have not yet been disclosed and one if it was a result of family feud and it is to be noted that not all of them are Yadavs.

Another article from India Today details on two killings that happened in different places on May 31st and ruled out political involvement. Two Samajwadi Party leaders were shot dead in Uttar Pradesh. Samajwadi Party leader Lalji Yadav was shot dead around 9.30 am near Siddiquepur in Khwaja Sarai area of Jaunpur district. In Gautam Buddh Nagar district, the president of the Samajwadi Party's Dadri assembly segment Ramtek Kataria was killed in a similar manner.

In the case of Lalji Yadav, district Superintendent of Police Ashish Tiwari said, "Prima facie, it appears to be a case of personal enmity and not any political rivalry".

While in the case of Ramtek Kataria Prima facie, district Senior Superintendent of Police (SSP) Vaibhav Krishna said, "the killing appears to be a result of personal enmity with one of Kataria's brothers in the extended family". Indian Express has reported that one BJP office-bearer is among the six accused named in the FIR.

These were all the reports of deaths of politicians, especially Yadavs that we could find after elections.

In conclusion, Twitter user's claim that 25 Yadavs were killed in the past few days by BJP workers is absolutely fake. It has been found that there has been a number of killings but none involving political issues as of now and definitely not by a BJP worker. This particular tweet can be considered as fake news used for propaganda against the ruling BJP.