The claim that PM Modi might have been an illegal vendor or hawker like Avdhesh Dubey because of RTI not providing data about it is false. This is because no law was implemented by the Indian Ministry of railways that allowed vendors to acquire a license.

A political Analyst Tehseen Poonawalla claimed on Twitter that his RTI shows that there is no record to show Prime Minister Narendra Modi had permission to sell tea at any railway station/train. His tweet came in the wake of the recent controversy regarding the arrest of a train hawker whose video making commentary on politics and imitating politicians went viral on social media.

The man was arrested and had to face 10 days of judicial custody and was slapped a fine of Rs. 3,500.

We had published a detailed report of how media misreported in this case. You can read it here. He was arrested for illegal hawking in trains and not for mimicking politicians

This can also be confirmed from a recent tweet from the Ministry of Railways regarding this issue.

The irony in Avdhesh Dubey case: my RTI shows, there is NO RECORD to show shree Narendra Modiji had permission to sell tea at any railway station/train. So IF he did so, like Avdhesh Dubey, Modiji sold tea illegally. Modiji became PM but sent his fan to jail! #MondayMotivaton 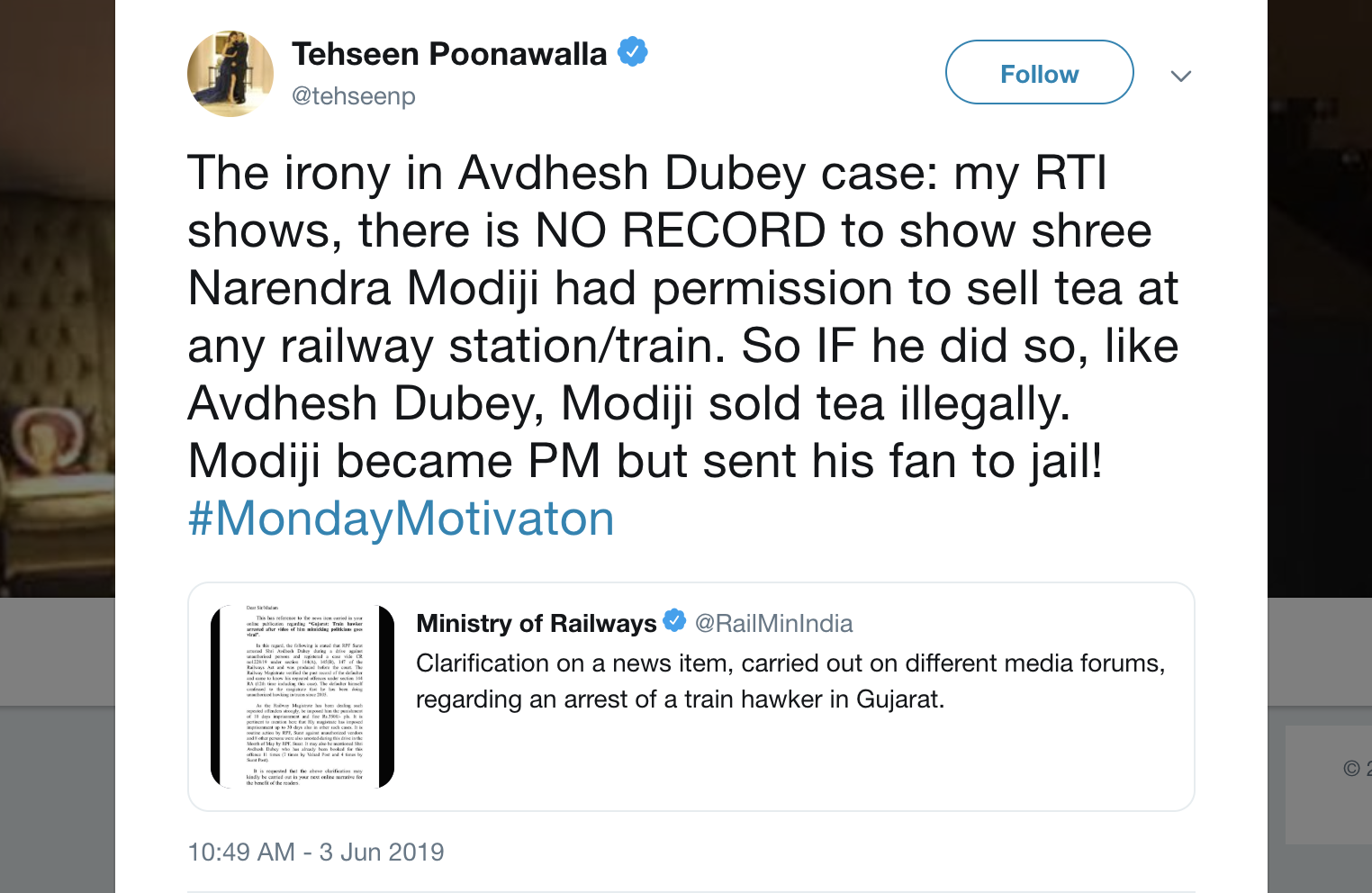 Even though Tehseen Poonawala has not shared the copy RTI reply that he has received which can support his claim, let's assume that no such information is available about the permission being given to Narendra Modi.

A tweet reply from Twitter user @pokershash gives us an idea as to why his claim that Modi might have been an illegal tea seller at the train station is false and misleading. The user in his reply has pointed out that the railway act was implemented in 1989 and that PM Modi sold tea around 1965-1966. 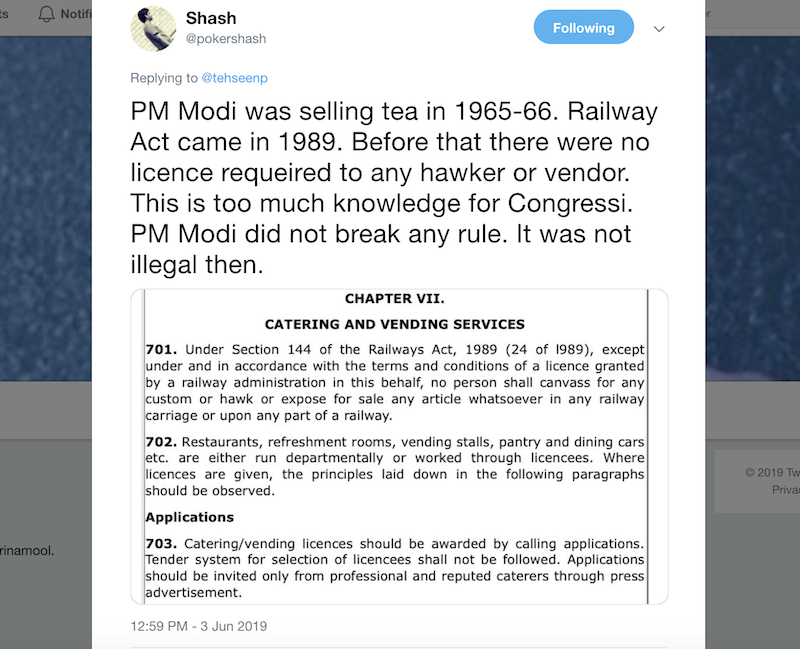 No License Required in 1965

We verified the claim of @pokershash and found that it is true. This can be confirmed by going on the Indian Railways website and reading Chapter 7 which sets rules and regulations that have to be followed with regard to ‘CATERING AND VENDING SERVICES’ and this was implemented from 1989. No proper law as such had been implemented before that especially adhering to licensed catering and vending services.

This might also be the reason as to why the Tenhseen Poonawalla did not get any RTI information about Modi being a registered tea vendor because there was no law implemented that legally allowed vendors to sell using license from the government.

conclusion: The claim that PM Modi might have been an illegal vendor or hawker like Avdhesh Dubey because of RTI not providing data about it is considered to be false. This is because no law was implemented by the Indian Ministry of railways that allowed vendors to acquire a license.

Moreover, this is not the first time people have accused PM Modi and his past when he used to sell tea at the Vadnagar station. A few months ago some people on social media claimed that the railway station itself did not exist when Modi claimed to have sell tea.

However, this claim is false as we found documents to support the claim that the railway line existed before 1973 in Vadnagar.  PDF Document about the opening dates of Railway lines in India is available on the official website of the Western Railway.

A rail line between Mehsana and Vadnagar was opened on 21st March 1887 while a line between Vadnagar and Kheralu was started on 12th Dec 1888. This clearly shows that a railway station exists in Vadnagar since 1987. Here is the screenshot of the relevant section of the PDF which can be downloaded from Railways website. 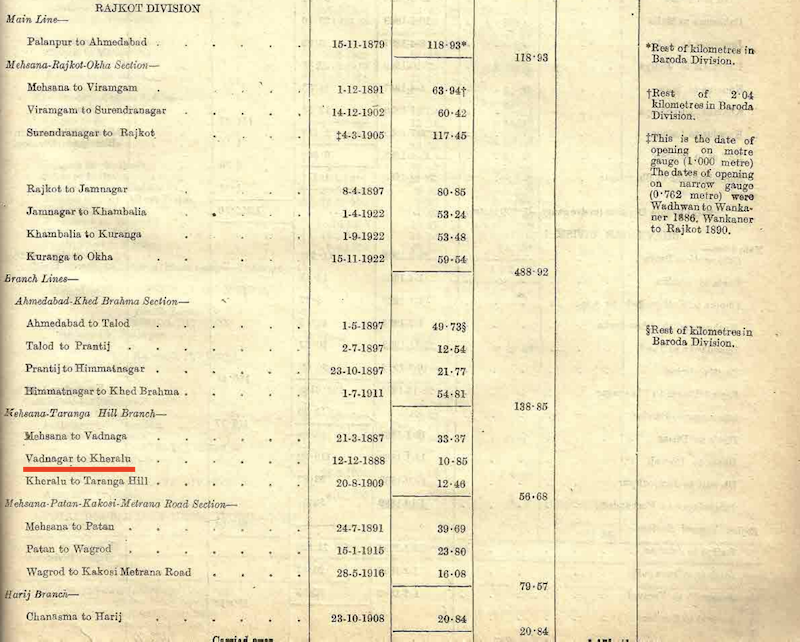