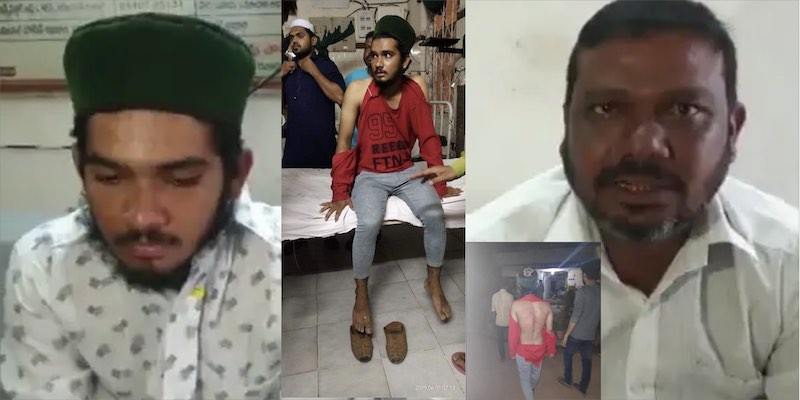 The viral news is fake that a Muslim boy was beaten up by a mob of BJP and RSS workers for not chanting "Jai Shree Ram". He was thrashed for harassing a teenage girl.

A post becomes increasingly viral on social media claiming that a Muslim boy was brutally beaten by a mob of  BJP and RSS workers and forced him to chant "Jai Shri Ram". A Former Corporator of the GHMC named Amjed Ullah Khan tweeted a post with some photos claiming that "Muslim youths beaten very badly by BJP/RSS workers in Karimnagar for not saying Jai Shree Ram, there have been communal incidents happening since @bandisanjay_bjp won elections, why @cpkarimnagar is silent on such communal elements...?@TelanganaCMO @KTRTRS @KTRoffice @TelanganaDGP". 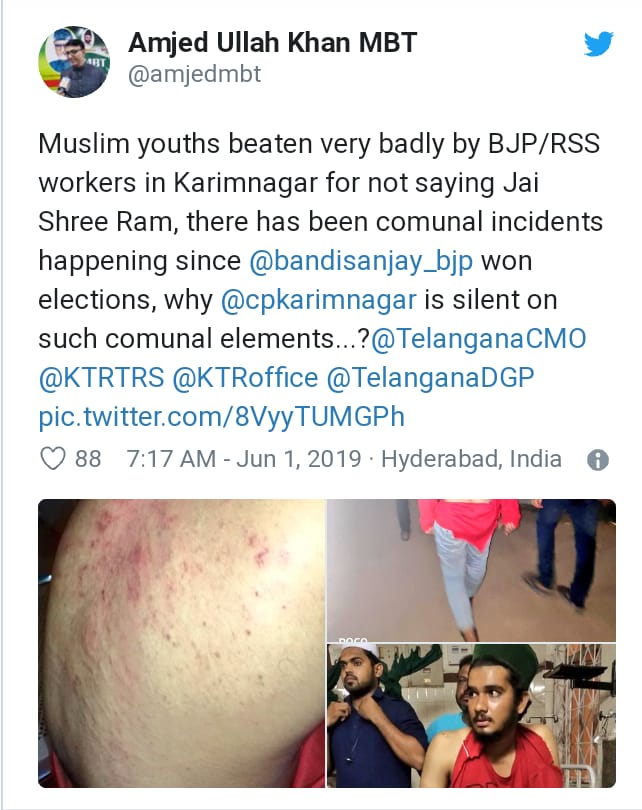 After that, he also shares a video of people at a police station, alleging BJP and RSS workers were behind the attack on that boy. He wrote while sharing a video "One of the attackers was caught while he was attacking a Muslim youth for not chanting Jai Shree Ram, See how law-abiding citizens are Muslim youths, In spite of anguish against the attacker they handed him to the police. The police should be very alert from now till Eid al-Adha".

Many other social media users have shared the pictures with a similar claim.

The Commissioner of Police VB Kamalasan Reddy responded by tweeting a video in which the boy who was attacked by a mob was seen saying that he was beaten up over personal issues and it was not a communal incident. He says it is a matter of love story. The boy has allegedly been harassing a teenage girl over the last few days. You can watch the video here:

The Indian Express says that the police registered a case against five persons who beat up him, under sections 341, 363 and 506, read with 34A and 324, of the Indian penal code (IPC).

Police also share a video in which his father confesses and apologized that there was no communal angle in this matter it was his son's fault because of which this incident took place.

Conclusion: The Muslim youth was beaten up over the personal issue of a love affair and for harassing a teenage girl. The claim that he was beaten up by a mob of BJP and RSS workers for not chanting "Jai Shree Ram" is false.

This is not the first time when a general incident has been given communal color. Earlier it was claimed that a Muslim man was beaten up in Gurugram for wearing the skull cap. However, the police investigation in the Gurugram case has revealed that the Muslim youth Mohammed Barkat Ali was assaulted but neither his skull was thrown nor his shirt was torn by the accused.

A personal fight over the price of detergent was given a communal angle in Begusarai Bihar.