Man shot at in Begusarai for his ‘Muslim name’: Police says it was not a case of hate crime 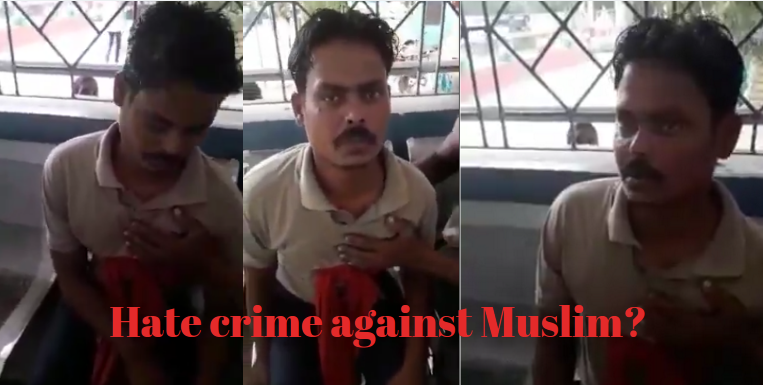 As per Begusarai Police, the man was shot in Begusarai after a fight over the price of detergent. There is no communal angle in this incident and is not a case of hate crime either.

A video clip of an injured man is going viral on social media. In the video, he can be heard saying “I was stopped by Rajiv Yadav and he asked me my name. When I told him my name, he said you should go to Pakistan and then shot me”.

The man in the video is identified as Mohammed Qasim who is a detergent salesman in Kumbhi village in Begusarai district of Bihar.

Qasim said that Yadav, after shooting him in the back, was reloading the gun to shoot him again, which is when he pushed him away and escaped. When asked whether anyone came forward to offer help, Qasim denied and said Yadav was waving the gun in the air and everyone present was scared.

He added that he first went to the village head, but no one supported him. He then somehow reached the police station and the police took him to the Sadar (town) government hospital for further treatment.

Media Reports based on the video and social media reaction

The Hindu took his statement on face value and reported the incident with a headline "Man shot at in Begusarai after he reveals his ‘Muslim name". Several other media houses like News18 and Scroll.in have referred to this report by Hindu.

A Twitter user Md Asif Khan tweeted "One more hate crime against Muslim. A Muslim Hawker shot at in Begusarai, Bihar Some guy asked his name, he said "Mohd Qasim" then perpetrator said " BC tu yaha kya kar raha hai, tujhe to Pakistan mein hona chahiye" and shot fire on him. This is Modi's Hindu Rashtra 2.0". 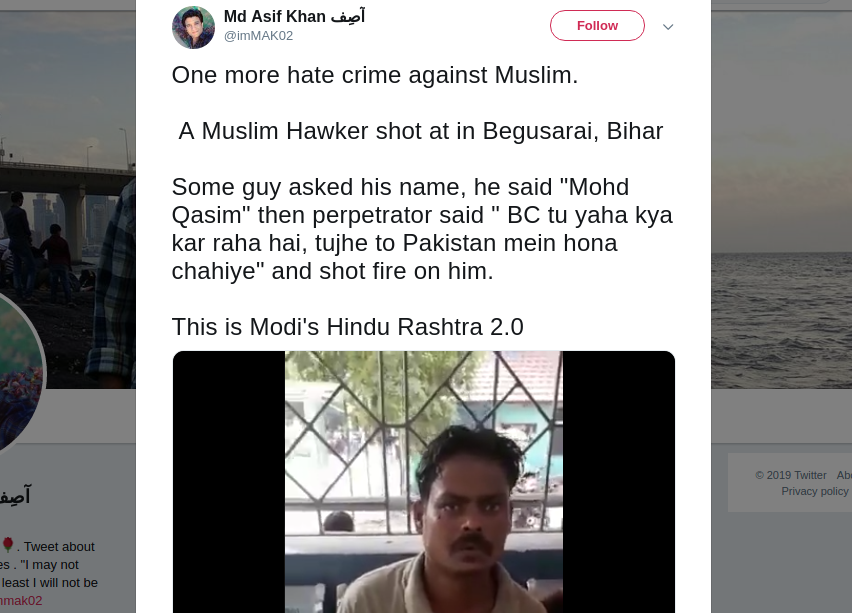 AIMIM chief Asaduddin Owaisi blamed the BJP leadership for the brazen attack and said Muslims have been “reduced to target practice” in the country. His tweet reads:

"Qasim almost lost his life for literally just saying his name. But sure, I am ‘fear mongering’ Where does Rajiv’s brazenness come from? From the top. BJP’s leadership has constantly demonised us & associated us with Pakistan We’re not human in their eyes, we’re target practice".

An Ex-BBC journalist Tufail Ahmad tweeted "This is the threat Modi's victory poses. Hatred originates from politicians and thrives in a certain type of political cultures. Man shot at in #Begusarai for his ‘Muslim name'"

Not a Hate Crime: Police

Kundan Kumar Singh, deputy superintendent of police, Begusarai police headquarters, has denied that it is a hate crime.

“I made enquiries with the Cheriya Bariyarpur station house officer. Qasim was doing a round on his moped and sold three packets of detergent powder to Yadav on Saturday. The total amount came to Rs 110. Yadav, however, was willing to pay only Rs 100. An argument ensued and Yadav shot him,” he said.

ANI has also tweeted the statement of the DSP of Begusarai. The tweet reads:

DSP Begusarai on a man shot at after he was asked his name: Qasim sells soap, detergent etc. A fight broke out between Qasim & one Rajiv over the price of detergent, Rajiv took out a country made pistol & shot him. He's undergoing treatment, probe on.

In a series of tweets, Begusarai Police assured that the case shall be investigated thoroughly and guilty punished. The police also asked not to generalise the action of one person. The tweet reads:

Incident happened in cheriya bariyarpur ps where one person was shot by another. Matter under investigation. As per FIR and some eye witnesses there is nothing related to what is being said on social platforms. Action of one person has been generalised for convenience.

Let us not fall into this trap. Matter shall be investigated thoroughly and guilty punished. But request all not to spread such rumours based on action of a single individual. One must realise this send a wrong message not only in local area but to whole nation and might.....

disturb our social fabric in a long term. Have patience, refrain from spreading any unwanted messages, keep aside your affiliations and allow law to take its own course. This is an individual action and must be seen as such. Hope you all will cooperate.

Conclusion: As per Begusarai Police, the man was shot after a fight over the price of detergent. There is no communal angle in this incident and is not a case of hate crime either.

3 Lynchings in 3 days after the election result?

An infographic is going viral on social media to claim that three cases of lynching have been reported in three days. Several users have tweeted this infographic. 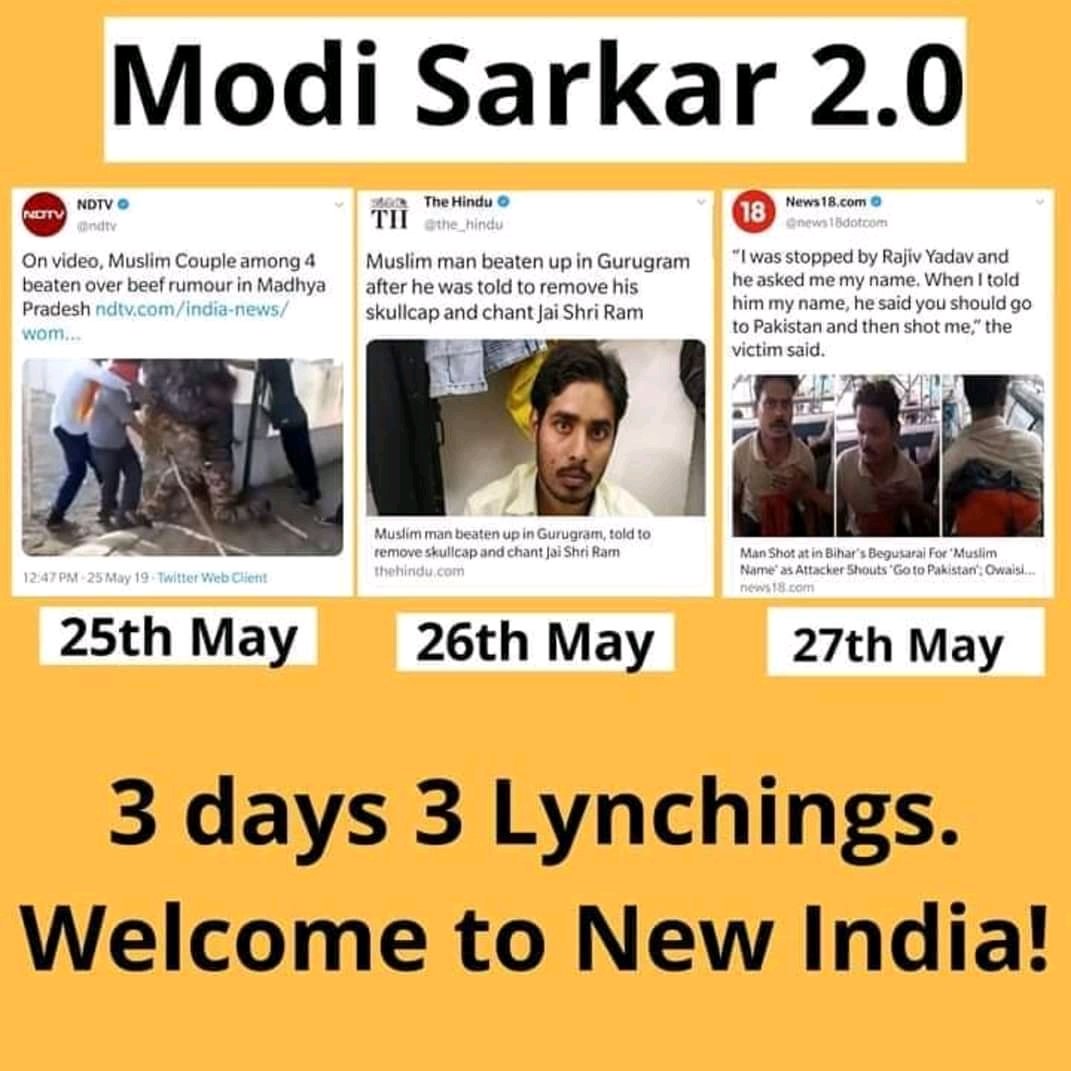 Infographic claims that the first case happened on 25th May when a Muslim couple along with their aid was beaten by a mob in Madhya Pradesh. However, the claim is wrong because the incident happened on 22nd May and has no correlation with the re-election of the Modi government. We have done detailed fact check on this which you can read here:

The second incident is about a Muslim man being beaten in Gurugram for wearing a skull cap. However, The police investigation with the help of CCTV footage has revealed that the Muslim youth Mohammed Barkat Ali was assaulted but neither his skull was thrown nor his shirt was torn by the accused. You can read the detailed report on this here:

Clearly, the infographic is misleading and has been created to build a selective narrative that Muslims are being targetted across India after BJP's victory in the recently concluded Loksabha election.