The statement of SIT clearly said that at no point did they find Sadhvi Pragya’s involvement in the murder of Gauri Lankesh nor is her name mentioned in the charge sheet.

The Gauri Lankesh murder case has resurfaced after a year following an article by The Indian Express establishing the link between Bharatiya Janata Party’s Bhopal candidate Pragya Singh Thakur and suspects of Gauri Lankesh's murder.

Gauri Lankesh was a journalist turned activist from Karnataka and ran her own weekly named “Gauri Lankesh Patrike”. She was shot by a man in helmet near her own residence on 5th September 2017. The case was taken up by the SIT (special investigation team). A charge sheet of 9235 pages was filed by the SIT, containing names of the suspects and various organizations that may be linked to the assassination.

The Indian Express report claimed four absconding members of Hindutva outfit Abhinav Bharat had trained several suspects with links to the Sanatan Sanstha who are believed to have killed the journalist. The report claims that the police made the claim in documents submitted to a court in Karnataka’s capital Bengaluru. These absconding members of Abhinav Bharat are wanted for their alleged role in the Samjhauta Express, Mecca Masjid, Ajmer Dargah and Malegaon blasts. Two of them, Ramji Kalsangra and Sandeep Dange, are also among the 13 accused in the 2008 Malegaon blasts case along with the Bharatiya Janata Party’s Bhopal candidate Pragya Singh Thakur.

The report claimed further, “As many as five “training camps” – Jalna in 2011, Jalna in January 2015, Mangalore in August 2015, Ahmedabad in November 2015 and Nasik in January 2016 – were held by suspects from Abhinav Bharat, the SIT investigation has revealed.”

The headline of Indian Express clearly suggests a link between Sadhvi Pragya and Gauri Lankesh's murder. 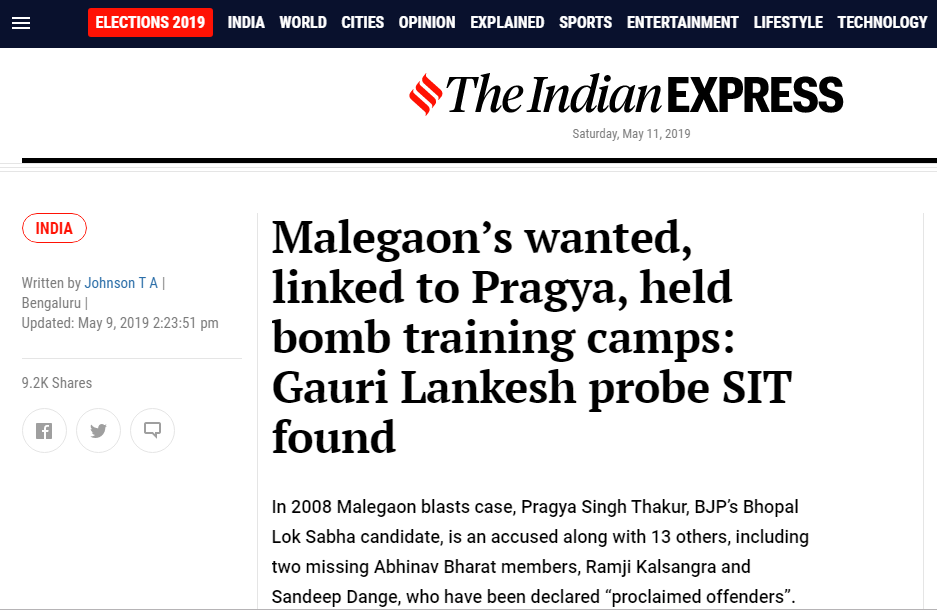 Many people on Twitter were seen sharing this article which was published on 9th May. 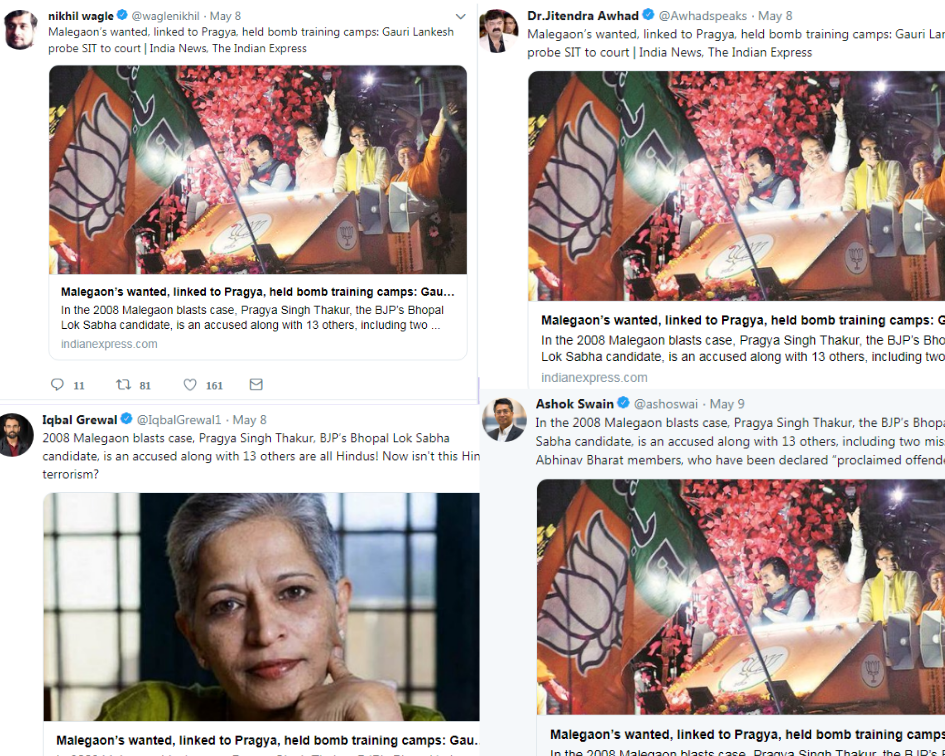 The Special Investigation Team conducting inquiries in the Gauri Lankesh murder case has denied the report published in The Indian Express that claimed four absconding members of Hindutva outfit Abhinav Bharat had trained several suspects with links to the Sanatan Sanstha who are believed to have killed the journalist. the statement by SIT reads:

“SIT has not found in its investigation or mentioned in the charge sheet any link to Sadhvi Pragya, Malegaon blasts, Abhinav Bharat. There is no evidence to suggest the same. No documents purporting the same have been submitted to the court.”

The report of denial was covered by many media houses including The Indian Express. Even after clear denial from the SIT about any links between Pragya Thakur and Lankesh murder, Indian Express doesn’t seem to completely agree to the information, we understand this by the very suggestive headline that they used for their article “SIT says no link between suspects in Malegaon and Lankesh murder, case papers speak otherwise” It clearly says that Indian Express is still doubtful about the case files and the clarification given by the SIT.

The statement of SIT clearly said that at no point did they find Sadhvi Pragya’s involvement in the murder of Gauri Lankesh nor is her name mentioned in the charge sheet.