If not for Ambedkar, Mulayam, Akhilesh would have been grazing cattle: Journalists misquoted Yogi Adityanath 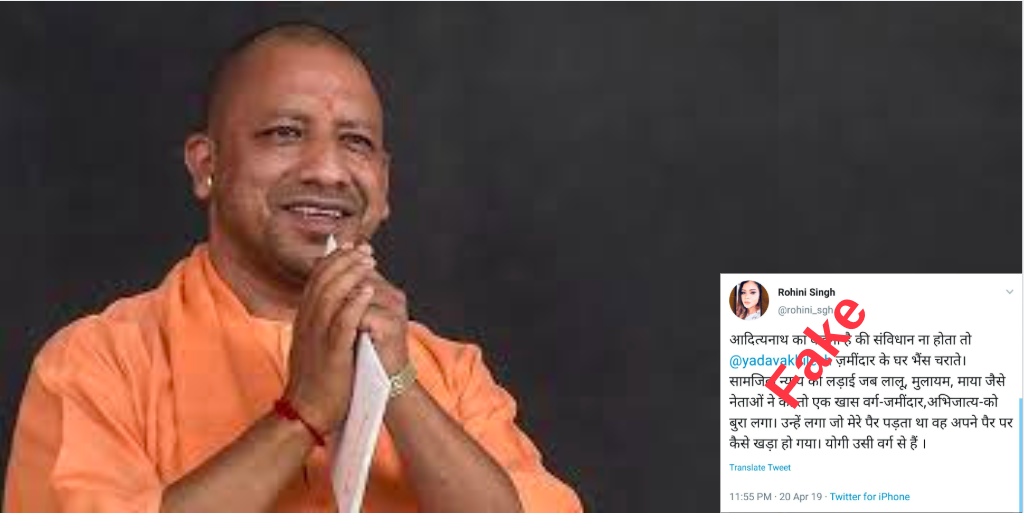 Yogi Adityanath didn't say that If not for Ambedkar, Mulayam and Akhilesh would have been grazing cattle. He was referring to the statement made by Mayawati during the 2014 Loksabha election.

Rohini Singh who works for a controversial left-leaning news portal "The Wire" tweeted "Adityanath says if not for constitution then Akhilesh Yadav would have been grazing buffaloes in the house of some landlords. When leaders like Lalu, Mulayam, Mayawati started the fight for social justice then a particular group felt bad that people who were lying on our feet are now standing with them. Yogi belongs to the same group". (translated from Hindi).

Another independent journalist who was earlier associated with The Wire, Prashant Kanojia tweeted "Yogi says, 'agar samvidhan nahi hota to @yadavakhilesh kisi jameendar ke yhan bhains chara rahe hote' I am sure not a single media has balls to call it castiest remark. Yogi is a sadak chaap goons who hates people from Bahujan Community and has promoted atrocities against them."

Rohini Singh has deleted her tweet but her retweet of Prashant Kanijia is still there on her wall. She retweeted with a caption "Absolutely disgraceful statement made by Adityanath if this is true. What’s more shocking is how no one in the media is reporting on Adityanath’s blatantly casteist comment."

You can see the archived version of tweets here.

This news was first reported by Hindi news portal Amar Ujala on April 19. You can see the archived version of the report here in case Amar Ujala updates their story. 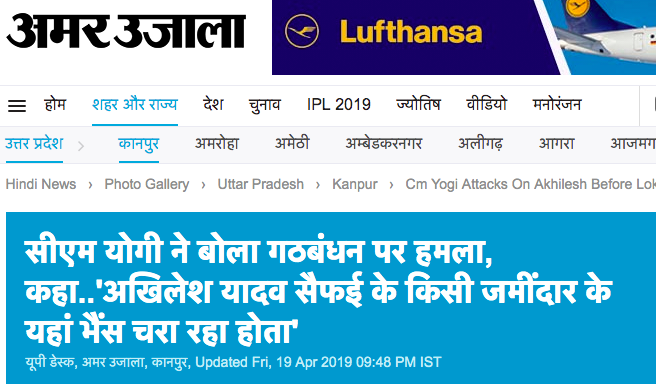 This is going viral on social media and people are hurling abuses on Yogi Adityanath for making this statement. You can see all such posts on Facebook here.

Yogi Adityanath was quoting Mayawati's 2014 speeches where she attacked Akhilesh for disrespecting Ambedkar. Here is the speech of Yogi Adityanath. (relevant section at 0.46)

Clearly, Amar Ujala had twisted the statement of Yogi Adityanath to show that Yogi Adityanath has spoken these words for Akhilesh Yadav and Mulayam Singh Yadav and based on these twisted reports journalists like Rohini Singh and Prashant Kanojia started abusing UP's CM. Ironically, Rohini Singh has accepted in a reply that Amar Ujala story had wrong and misleading headline but she is yet to delete her retweet in which she abused Media and Yogi Adityanath.

OneIndia.com has clipped the above video to remove the reference of Mayawati to falsely attribute the above statement to Yogi Adityanath. The video is now being widely shared on Facebook. You can watch the misleading video by OneIndia here.

During 2014 Loksabha election, Bahjuan Samaj Party supremo Mayawati attacked Samajwadi Party chief Mulayam Singh Yadav and the then Uttar Pradesh Chief Minister Akhilesh Yadav for insulting B.R Ambedkar and said that the father-son duo along with the entire Yadav family would have grazing cattle if Dr BR Ambedklar hadn`t been there. This was reported by many mainstream media like Zee News and NavbharatTimes.

We were able to find the video as well in which she made the above statement.

Conclusion: Yogi Adityanath didn't say that If not for Ambedkar, Mulayam and Akhilesh would have been grazing cattle. He was referring to the statement made by Mayawati during the 2014 Loksabha election.