Fact Check: one crore job lost due to demonetisation - no, congress misquoted the report

The official Twitter handle of Congress misquoted the ‘State of Working India 2019’ report to claim that 1 crore jobs lost due to demonetisation.

The official Twitter handle of the Congress tweeted about the ‘failed objective’ of demonetisation attaching a Huffington Post article which talks about the number of jobs lost because of demonetisation. It has been clearly mentioned in the first few lines of the Huffington Post article that 5 million men have lost their jobs, however the Congress twitter account has quoted the tweet by adding on the information of ‘1 crore jobs lost, 2% GDP loss’ both of which are not mentioned in the attached article. Furthermore, no other official reports have mentioned a 2% GDP loss or 1 crore jobs being lost. 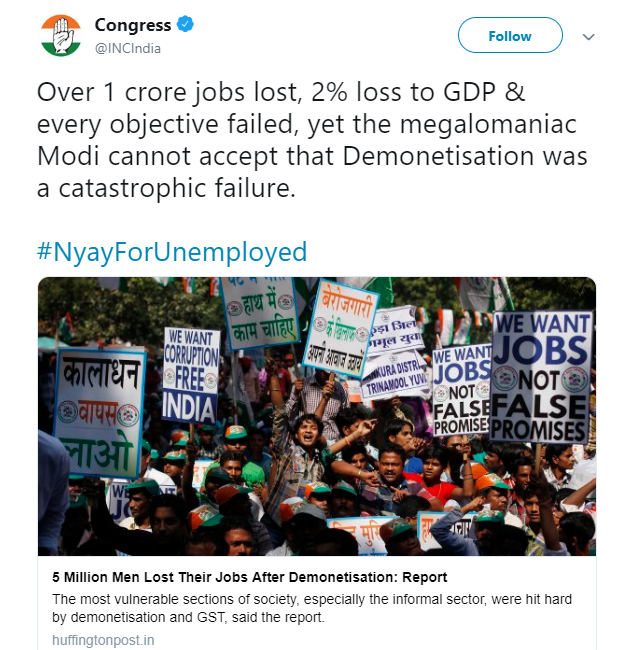 The report used by this particular Huffington Post article and several other news agencies is the  ‘State of Working India 2019’ report released by the Centre for Sustainable Employment ( CSE ), Azim Premji University, Bengaluru. The report shares statistics which shows an increase in the unemployment rates coinciding with the time of implementation of Demonetisation.

Huffington Post also shared what the lead author of the report, Prof. Amit Bansole said regarding the report, “This is a net figure and therefore, whatever jobs may have been added elsewhere, there have been enough jobs lost, on balance five million less work opportunities were there, so that is not a good thing for the economy. Particularly given that we have been seeing what appears to be a strong GDP growth. So, in this case, to end up with net job losses is not a good thing. We should be seeing a workforce increase rather than decrease”. The information shared by the lead author regarding GDP is very contrasting from what the Congress had shared on their quoted retweet.

Moreover, the report says that job losses began around the time that Modi announced demonetisation, but is careful to add that it could not establish a “causal relationship” based on the data available.

Earlier, a report published by the Centre for Monitoring Indian Economy (CMIE) revealed that 1.1 crore jobs were lost in the year 2018. The report exhibited that the unemployment rates have sharply inclined which rose up to 7.4 % in December 2018.

Union Minister Piyush Goyal had said that the available data are not inclusive and does not cover many sectors and many new age industries like taxi aggregators who are reportedly engaging a million people today.

The controversy started blowing up after 2 members PC Mohanan and JV Meenakshi had resigned following tensions with the government, one of it being them not releasing the employment report that was approved by them in December itself. The National Sample Survey Office’s (NSSO) survey has been delayed by the government for the past year. The full article regarding this can be read here. However, on January 31st, a Business Standards article released the data which showed the unemployment rates showed a 45-year-old high of 6.1% from 2017-2018.

It is also to be taken into consideration that the CEO and Managing Director of the Centre of Monitoring Indian Economy (CMIE) is a regular contributor to the Business Standard (His articles can be accessed here) and has helped Congress formulate its 2019 General Election Manifesto.

Furthermore, an Economic Times article reports that “the Confederation of Indian Industry survey of over one lakh small and medium enterprises have shown 13.9% increase in net jobs created in the MSME sector in last four years or 3.3% per annum”.

Therefore, Congress’ claim of 1 crore jobs lost due to demonetisation is false. In conclusion, all reports that have been released regarding the unemployment rates after demonetisation are not vivid and clear. The governmental reports have been criticised to be heavily biased and moreover, the statistics for men who have lost their jobs have been mentioned but all areas of unemployment have been failed to be covered. The claims of different reports vary from each other and until clear verification is implemented, conclusions cannot be drawn.

According to a research paper co-authored by eminent economist Gita Gopinath, the government's note ban decision shaved off economic growth by at least 2 percentage points for the October-December quarter of 2016 in which the demonetisation move was effected. But this number is only for one quarter.

As per another working paper by the US-based National Bureau of Economic Research, demonetisation hit India’s economic activity in the period following November 8, 2016, event but the impact had dissipated by the summer of 2017.

Was demonetisation a failure? We have added different viewpoints in our discussion section. Go through those points and decide yourself.