Fact Check: Was Rahul Gandhi arrested by FBI in 2001? - No, the paper cutting going viral is fake 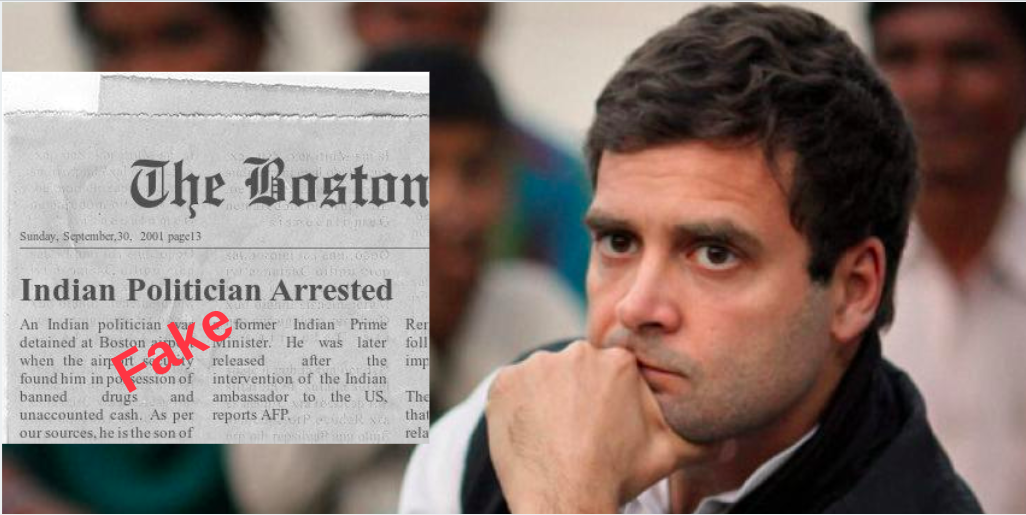 Rahul Gandhi was detained in Boston airport in 2001 by FBI but the reason for detention is not known. The newspaper clipping claiming that Rahul Gandhi was arrested for carrying unaccounted cash and drugs is fake.

A paper cutting of The Boston (pic below) dated September 2001 is going viral on social media claiming the son of Former Indian Prime Minister was arrested for carrying drugs and unaccounted cash.

The clip was shared on Twitter by Swaminathan Gurumurthy who is currently serving as a part-time director of RBI. His tweet stands deleted now. 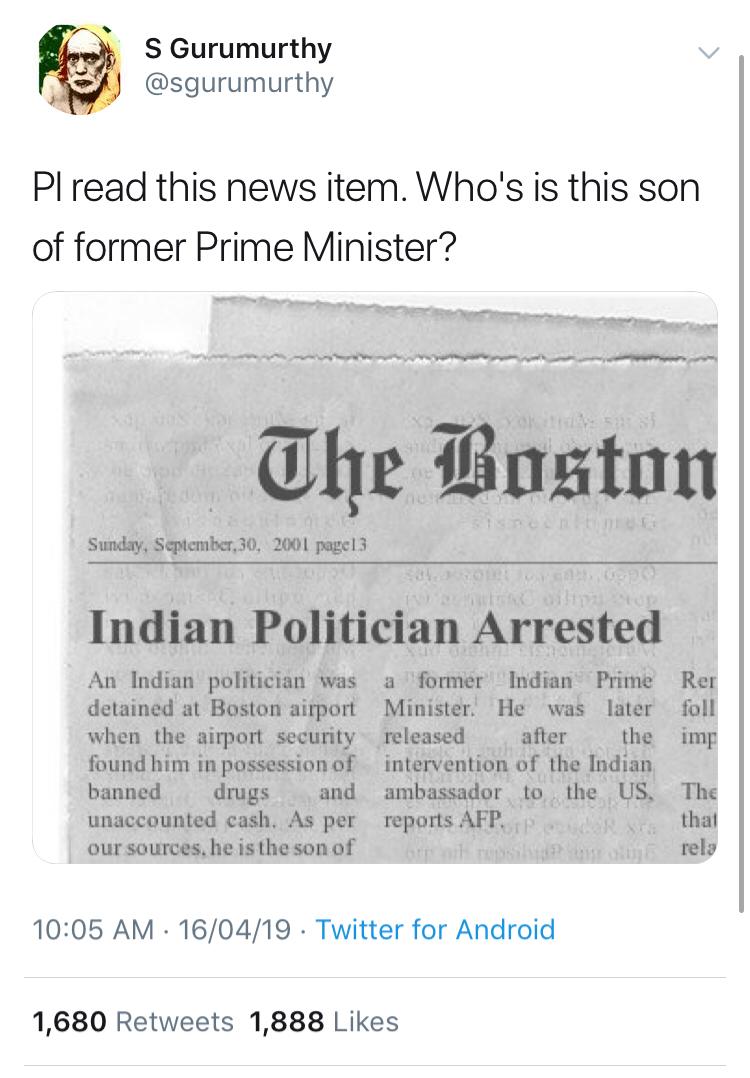 Several other Twitter handles have tweeted the same clip. A Twitter user Sachin Singh tweeted "This is the printed evidence of Boston newspaper. Tell me about rascal son of Indian Prime Minister, who was arrested with drugs and unaccounted cash in Boston & who saved him?".

Another Twitter user Bhaskar G tweeted "Dr @Swamy39 the news article from The Boston News paper which talks about an Indian politician son of the former prime minister arrested with banned drugs and unaccounted cash... Thanks to @neelakantha ji for sharing this".

This user has credited Sushil Pandit for this clipping. When we checked the timeline of Sushil Pandit, we found that he has shared the same clipping with a caption "NDA 1 is rumoured to have helped #Pappu in the US, in the fond hope that Italians as opponents are a good insurance against electoral defeat. Likewise, has NDA 2 too also spared the #Jijaji even an FIR in the past 5 yrs in a hope that such discredited lot are good rivals to have?". 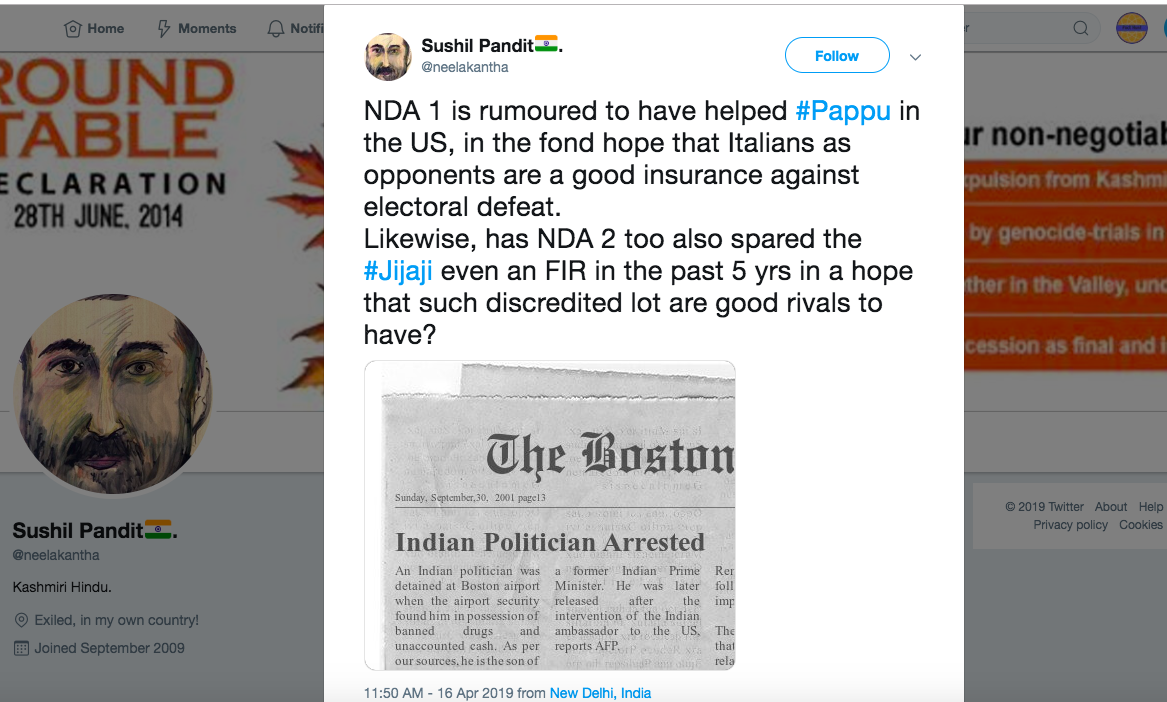 Based on this video, News Gram 24 published an opinion article to claim that It was former PM Atal Bihari Vajpayee Ji who saved Rahul Gandhi from spending "128 years of jail term" when he was arrested in the US in 2001 for carrying drugs and 1,60,000 Dollars.

The article argues that the American law lets you carry only 10,000 USD in cash and anything above the amount requires an official declaration which otherwise will lead to 8 years imprisonment for every 10 thousand you exceed. Which means Rahul Gandhi had 1,60,000 USD, that is 16 times more than the limit which would have given him 128 years of Jail term!

As per fact-checking website Snopes, it is not illegal to carry more than 10,000 USD. As per the article, the transport of more than $10,000 in American currency isn’t expressly prohibited, but possession of such a sum must be reported to Customs by Americans who travel internationally.

Quoting the relevant part from the article:

"Again, the $10,000 threshold is used as a barometer for reporting, but is not a dividing line between the legal and the illegal. In all the scenarios described, the possession of that specific amount of money (or more) is denoted as one that requires reporting and perhaps explanation when you and your money pass through official checkpoints.

Notably, however, having a sum of $10,000 or more is not specifically illegal in any jurisdiction or under any law in the United States. You may legally store cash as you wish in your home and carry it with you in your travels, and if you’re traveling privately you need not report the transport of your own money even if you carry $10,000 or more.

However, if you are pulled over by a police officer with thousands of dollars in your vehicle, you may be asked to explain how and why you’re carrying so much money (ostensibly to uncover the trafficking of drugs and other contraband). And in many cases, law enforcement agents can seize large sums of cash and insist you provide proof you acquired the currency legally and do not intend to use it for illicit purposes. Legal justification for seizing money in that scenario is broad and complex, making it risky (even if not technically illegal) to transport large sums of cash."

Rahul Gandhi was detained not arrested

As per The Hindu's report dated September 30, 2001, Rahul was traveling from Boston to Washington, soon after the 9/11 attack on the Twin Towers, hence, the security being high on alert, he was detained by Federal Bureau of Investigation (FBI) for about an hour and was taken into an interrogation, was asked to verify his identity and passport. As per the report, FBI officers checked his baggage, despite being told that he was the son of a former Indian Prime Minister.

The Hindu had reported that sources in India had maintained that only when the news reached 10, Janpath, and the Congress president, Ms. Sonia Gandhi, reportedly spoke to the Indian Ambassador in the U.S., Mr. Lalit Mansingh, Mr. Gandhi was able to proceed with his onward journey.

However, Sridhar Krishnaswami reports from Washington, quoting well-placed diplomatic sources, that media reports of Mr. Mansingh having been brought into the picture to allow Mr. Gandhi to proceed on his onward journey from Boston to Washington "are simply not true.''

The headline of the newspaper report reads "Indian politician arrested". However, Rahul Gandhi was not a politician in 2001. He joined active politics in 2004. It's highly unlikely that a newspaper will make such a mistake.

It's highly likely that the newspaper was created using online tools. A website fodey.com allows to create Newspaper clipping for fun. Here is the comparison of the viral clip about Rahul Gandhi's arrest with a sample clip provided by fodey.com. 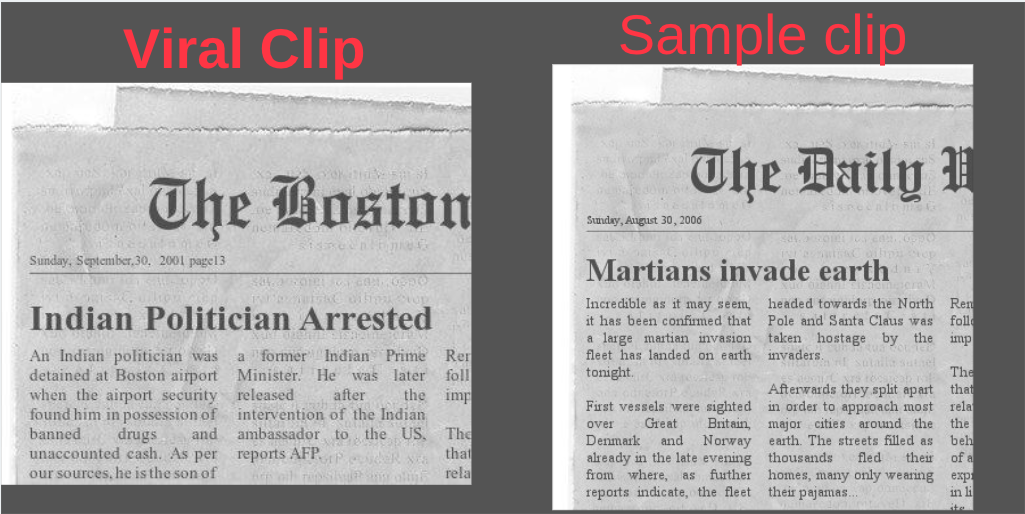 Clearly, the two clippings are very similar which suggests that the fake clip was created using fodey.com or some other similar tool.

Earlier, a similar fake clip of The Telegraph went viral claiming that Arvind Kejriwal was accused of rape in 1987. However, it was debunked by us earlier that the clip is fake. You can read the article here. 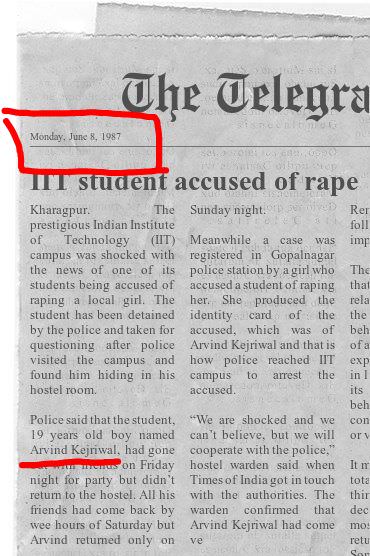 Conclusion: Rahul Gandhi was detained in Boston airport in 2001 by FBI but the reason for detention is not known. The newspaper clipping claiming that Rahul Gandhi was arrested for carrying unaccounted cash and drugs is fake.