Muslim girl ‘harassed for not wearing BJP cap’ : No, Times of India published one sided story

In her written complaint, she mentioned "molestation" and took the accused’s names, but did not mention the word “BJP” or "Muslim" or that she was targeted for her religious identity. There is no evidence as of now which can suggest that she was harassed for not wearing BJP cap.

A few days back a law student from Dewan law college, Umam Khanam had tweeted to accuse her fellow Hindu students of harassing her on a college trip. In her tweet, she had claimed that she was harassed because she was a Muslim. However, H.O.D, Ambuj Sharma denied the whole incident and there were several flaws in her story.

Now, Times of India reported that Dewan law college suspends Muslim girl Umam Khanam who was harassed for not wearing BJP cap. The author Piyush Rai started the report by calling it a surprise development. 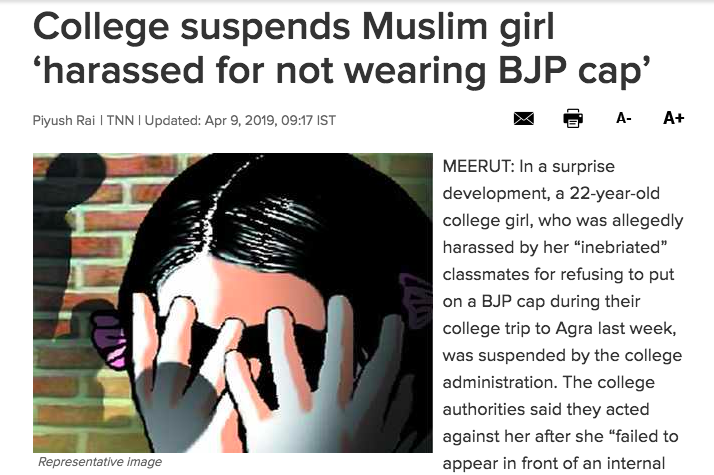 As per the report, "the college authorities suspended her after she failed to appear in front of an internal grievance cell to record her statement. The victim has approached police with a written complaint. In a letter addressed to senior superintendent of police, the victim has narrated her ordeal. She also elaborated on “pressure” being put on her to withdraw her complaint". In her complaint to the police, the victim wrote, “I took to Twitter to talk about harassment but the college and other students have given it a political and communal colour. They have been putting out my personal photos and videos in a conspiracy to get me thrown out of the college and also put pressure on me to withdraw my complaint.”

Report further states that she was suspended after a group of activists from Bajrang Dal and Vishwa Hindu Parishad met the college authorities demanding that the rustication of two students be revoked.

Ironically, it was Umam Khanam herself who gave the political and communal colour to the whole incident. She clearly mentioned in her tweet that she was targetted because she was a Muslim and was harassed when she refused to wear BJP's cap.

As per a report by Swarajya, Ambuj Sharma, head of the department (HoD) at Dewan Law College who accompanied the group, took the matter to the principal, who escalated the matter to the institute's head — executive director Colonel (retired) Dr Naresh Goyal — who then spoke to Umam.

Goyal told Swarajya's correspondent, "She looked very agitated and told me that she was sexually harassed on the tour. She took two names, Amit Kumar Singh and Ankur Verma, and said they should be rusticated immediately. Then she said okay Amit is not so guilty but please rusticate Ankur."

As per Goyal, she mentioned "molestation" in her written complaint and made a specific charge against Ankur, mentioned both the accused’s names, but did not mention the word “BJP” or "Muslim" or that she was targeted for her religious identity.

Naresh Goyal also said that till date, no eye-witness of the harassment has come forward in Umam's support.

Swarajya's correspondent who went to the college and talked to the eye-witnesses has reported that there were no BJP caps. Sandip Bansal, a classmate said, "None of what she says adds up. She says the boys bought BJP caps. But there was no BJP cap at all. All that was there was a BJP flag that was already fixed in the bus at the rear end because probably the bus had been previously used for a BJP rally. The cap claim is a complete lie. Can she produce even one evidence of it?"

Many students have come forward to give their testimonies, on camera, of how Umam is a "religious fanatic" which is also evident from her social media activities. A few of her retweets are self-explanatory about her extremist religious belief. 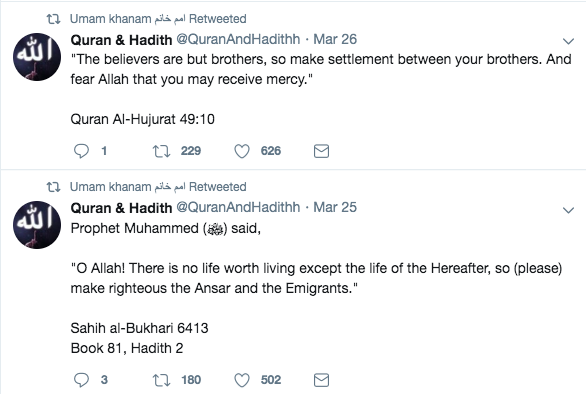 Swati Goel Sharma has shared several videos of students who have highlighted her religious intolerance. You can watch those videos here.

One student Shiva Trivedi said, "Umam is a religious fanatic. She is conservative and orthodox in an extreme way. She wants to get into the good books of Shehla Rashid and Afra Khanum. She is always talking about them. No wonder she tagged them in her tweets too".

Many of her batchmates believe she did all this to get fame and her extreme religious views are the reason for this.

Swarajya's correspondent called up Umam for her version, who said she could only talk over the phone as she would not be coming to the college.

"Asked why there were no eye-witnesses, Umam said she stood by her complaint. Asked why her classmates are campaigning against her, Umam said a conspiracy against her is on. Asked why her tweets differed from her written complaint that made no mention of her Muslim identity, she said she felt so and stood by her complaint. Umam then asked this correspondent her name and the publication she works for and, on hearing the answer, disconnected the call. She did not pick the calls made to her again".

Why Umam was suspended?

The report by Times of India suggests that the college took the decision under pressure from Hindu groups that came to meet Naresh Goyal in hundreds.

The institute's head — executive director Colonel (retired) Dr Naresh Goyal said, "We consulted our legal team and they suggested that since Umam is not coming for her statements, and the only eye-witness statements have come from the other side, she should be suspended too."

Were the two accused suspended or rusticated?

Piyush Rai, the TOI's journalist have written in his report that the two accused Amit Kumar Singh and Ankur Verma have been rusticated from the college. He has shared the rustication letters of the two students as proof.

However, this was a bit absurd that accused can be rusticated from the college without proper inquiry. When Swati Goel Sharma asked the executive director Naresh Goyal for clarification, he said, "the students have been suspended pending inquiry. They'll be appearing for exams too".

He did admit that in Hindi translation, what should have been "nilambit" (suspended) was wrongly written as "nishkaashit" (rusticated).

Neither Umam's tweets nor the recent developments prove anything. It is possible that she was actually harassed. However, there is an equal possibility that she did all this to get the fame as accused by her batchmates.

Things will be clear only when the investigation is completed.

As per prima facie, there were no BJP caps and also there is no mention of religious and political angle in her written complaint.

Still, Piyush Rai and Times of India have concluded that she was harassed for not wearing BJP cap.

The headline of TOI's report suggests that it was certainly a political issue. However, in the same report, she has been quoted "I took to Twitter to talk about harassment but the college and other students have given it a political and communal colour". Now, if it was not a political issue as claimed by Umam, then TOI's headline is clearly wrong.

When several social media users asked the journalist Piyush Rai to clarify his report he tweeted: "Comparing any journalist's report with a right wing mouth piece doesn't make for a good argument guys. People tagging me and my employer in random rants should not waste their time. I will write what I feel is right based on facts and not on what is being peddled on social media."

It was a sad day for journalism industry when a journalist associated with Times of India called a fellow journalist a mouthpiece of a particular ideology.

We are not sure which facts he was talking about since his report was based on a tweet by the alleged victim and a rustication letter. On the other hand, Swati Goel Sharma visited the college, talked to victim, teachers and eye-witnesses.

Now, it's not rocket science to decide whom to trust.

You can read our initial report on this incident here:

Law student harassed on college trip because of her Muslim identity: HOD denied the whole incident